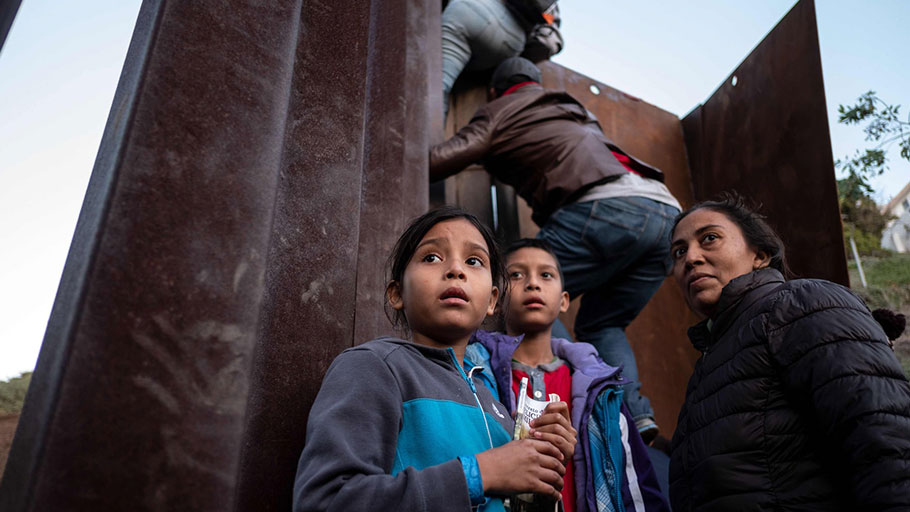 Fleeing a hell the US helped create: why Central Americans journey north

You Are Here: Home » Blog » Commentaries/Opinions » Fleeing a hell the US helped create: why Central Americans journey north

The region’s inequality and violence, in which the US has long played a role, is driving people to leave their homes

By Julian Borger, The Guradian —

Jakelin Caal Maquín, the seven-year-old Guatemalan girl who died this month in US custody, is the latest victim of a long, dysfunctional relationship between the US and its southern neighbours that has cost countless lives over the past half-century.

The forces driving ordinary people to leave their homes and put their lives at risk crossing deserts with smugglers to get to the US border are deeply rooted in Central America’s history of inequality and violence, in which the US has long played a defining role.

The flow of migrants trying to cross the border illegally is not all blowback from US foreign policy. Much of the poverty, injustice and murder in El Salvador, Guatemala and Honduras is homegrown, harking back to the age of Spanish conquest. Small criminal elites have long prospered at the expense of the populations.

Experts on the region argue, however, that when politicians or activists have come forward on behalf of its dispossessed, the US has consistently intervened on the side of the powerful and wealthy to help crush them, or looked the other way when they have been slaughtered.

The families in the migrant caravans trudging towards the US border are trying to escape a hell that the US has helped to create. 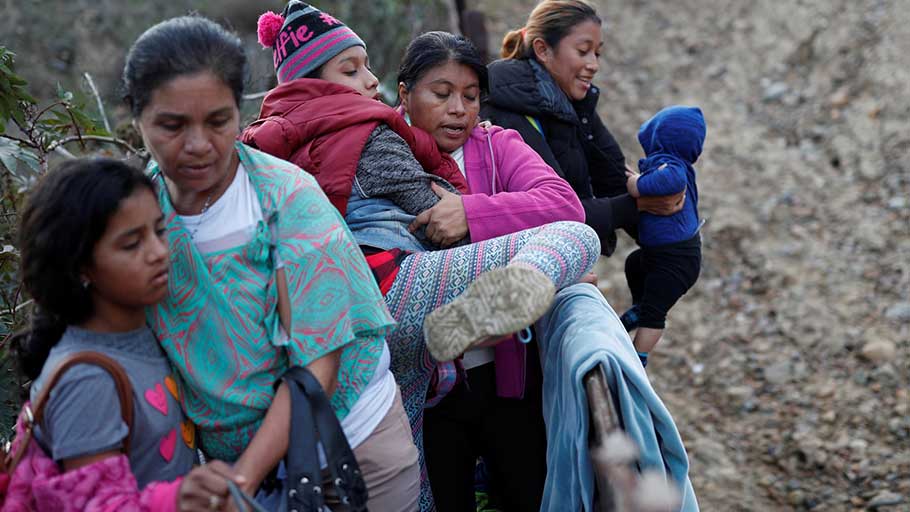 Central America’s inequality and violence, in which the US has long played a role, is driving people to leave their homes. Photograph: Carlos García Rawlins/Reuters

Sometimes it has been a matter of unintended consequences. Enforcement measures targeting migrants have multiplied the cost of smugglers’ services. Desperate customers take out big loans at high interest in order to pay. The only hope of paying off those loans is to reach the US, so even if they fail at their quest, they have no choice but to try again, and again.

“Where it used to cost around $1,000 to make the journey from Central America, it now costs up to $12,000, making shuttle migration impossible,” said Elizabeth Oglesby, an associate professor at the centre for Latin American studies at the University of Arizona in Tucson. “The only way for families to stay together is for women and children to migrate.”

More often US intervention in the affairs of these small and weak states has been deliberate, motivated by profit or ideology or both.

“The destabilisation in the 1980s – which was very much part of the US cold war effort – was incredibly important in creating the kind of political and economic conditions that exist in those countries today,” said Christy Thornton, a sociologist focused on Latin America at Johns Hopkins University.

Jakelin Amei Rosmery Caal Maquín, who died of septic shock and cardiac arrest in US border patrol custody, came from Alta Verapaz, in the northern Guatemala highlands, where small-scale farmers are being driven off their land to make way for agro-industry producing sugar and biofuels.

It is an example of why it is often hard to distinguish between security and economic reasons for migration. The men behind the land grabs are often active or retired military officers, who are deeply involved in organised crime.

“When communities fight back against land-grabbing, their leaders can be killed. We’ve seen just in the past year almost two dozen community leaders assassinated,” Oglesby said. “There is a legacy of impunity.”

Guatemala’s long civil war can in turn be traced back to a 1954 coup against a democratically elected president, Jacobo Árbenz, which was backed by the US. Washington backed the Guatemalan military, which was responsible for genocide against the native population. An estimated 200,000 people were killed between 1960 and 1996. 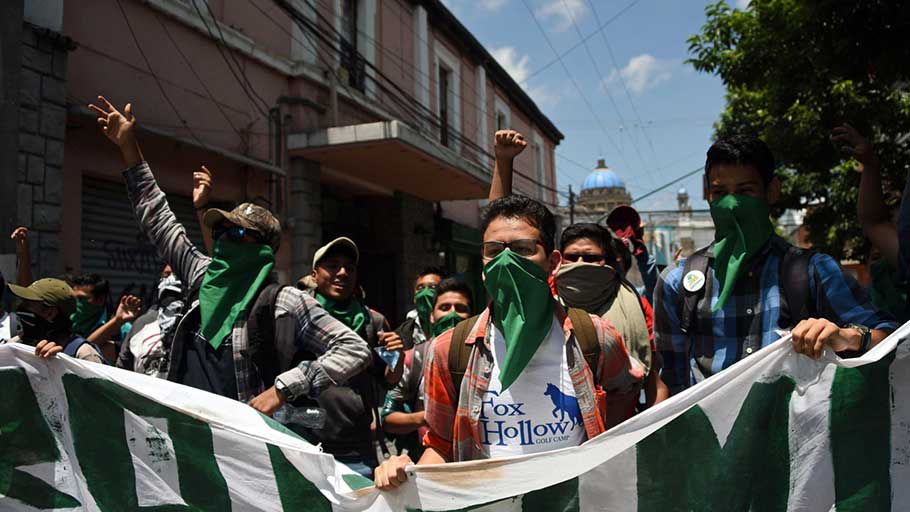 University students protest against the government policies on the International Commission Against Impunity in Guatemala. Photograph: Johan Ordonez/AFP/Getty Images

“The point was to root out anything that looked like communist subversion, but it was really a scorched earth policy against the indigenous people,” Thornton said.

The issue of impunity for violence remains central to Guatemala’s chronic problems. Jimmy Morales, a former comedian and the country’s president since 2016, has announced he is going to close down the UN-backed International Committee against Impunity in Guatemala (Cicig). Cicig has investigated corruption cases against Morales, his family and his political patrons, and links between organised crime and politicians like himself.

In September Cicig headquarters were surrounded by US-donated military jeeps, but there was no complaint from the Trump White House. On Tuesday, the government announced it was withdrawing diplomatic immunity from 11 Cicig workers.

El Salvador is also trapped in a cycle of violence that can be traced back to a civil conflict in which the US was a protagonist, training and funding rightwing death squads in the name of fighting communism.

“The civil war really destroyed the economic base of the country and any sense of a functioning democracy,” said Thornton. “It left a massively militarised society.”

Gangs have filled much of the space occupied by civil society in healthier societies, but they too are largely a US import. The MS-13 gang, frequently referred to by Donald Trump in justification of his hardline immigration policies, was formed in Los Angeles, and introduced into El Salvador when its members were deported – often to a country they barely knew: another instance of unintended consequences which have rubbed salt in the Central America’s wounds.

When Manuel Zelaya, Honduras’s reformist president, was seized by the country’s military in 2009, and flown out of the country to Costa Rica, still in his pyjamas, the Obama administration refused to call it a coup.

Hillary Clinton, the secretary of state at the time, argued that to do so would have meant cutting aid at the expense of the Honduran poor. In the first edition of her memoir, Hard Choices, she admitted working with other Latin American governments to ensure Zelaya would not return to power. The references to her role were removed in later editions. 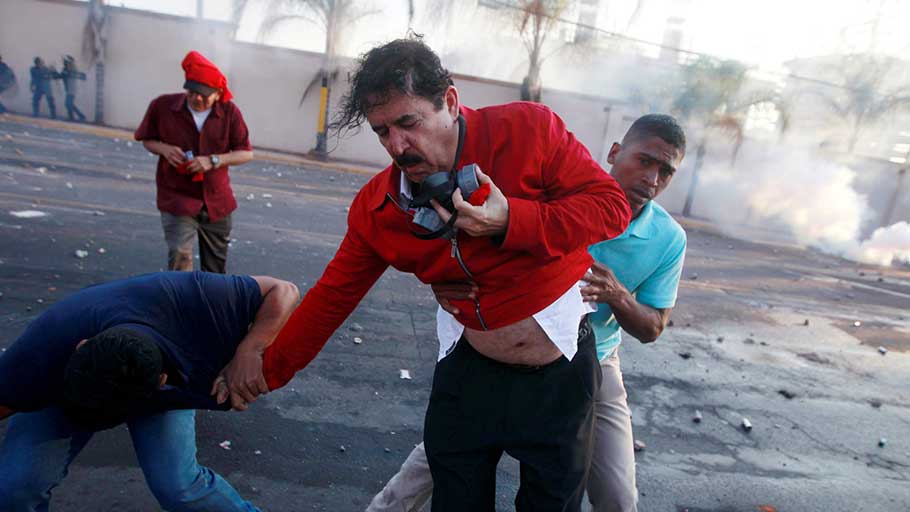 Manuel Zelaya is overcome by teargas during a protest against the re-election of Honduras’s President Juan Orlando Hernández in Tegucigalpa in January 2018. Photograph: Jorge Cabrera/Reuters

Zelaya had been trying to resolve conflicts over land, that pitted local campesinos against agro-industry. After the coup, that conflict was militarised and more than a hundred campesinos were murdered. Organised crime spread through the country’s institutions and the murder rate soared. Within a year, Honduras was the most violent country in the world not actually at war.

The current president, Juan Orlando Hernández, has further militarised the police force. When he looked in danger of losing his re-election bid last year, he unleashed a wave of violence against the opposition and extinguished the challenge. The Trump administration congratulated him on his victory.

“These societies were poor and violent irrespective of when the United States became involved in a major way,” Cynthia Arnson, the director of the Latin American Programme at the Wilson Centre thinktank, said. But she added: “The US since the very early stages of the cold war has played a defining role in the evolution of state violence.”