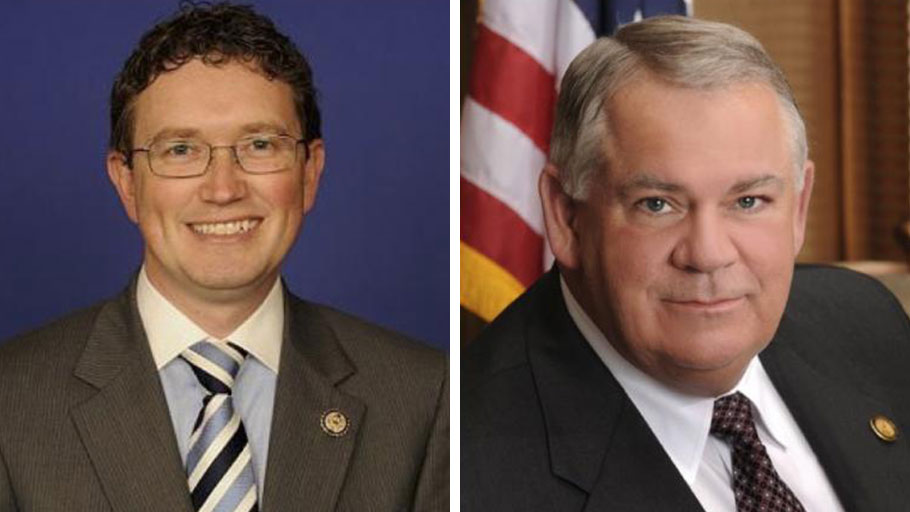 The GOP fight against voting by mail

You Are Here: Home » Blog » Editors' Choice » The GOP fight against voting by mail

U.S. Rep. Thomas Massie of Kentucky (left) and Georgia House Speaker David Ralston (right) are among the Republican leaders who are fighting expanded mail-in-voting in response to the COVID-19 epidemic. Massie tweeted that it would be “the end of our republic as we know it,” while Ralston said it would be “extremely devastating to Republicans and conservatives in Georgia.” (Official photos.)

Earlier this month, after Wisconsin’s Republican-led legislature refused to allow an expansion of mail-in voting, GOP officials and judges forced the state’s voters to choose between casting their ballot and risking their health during the coronavirus lockdown. Milwaukee health officials have already identified seven people who have contracted the coronavirus because of in-person voting during the April 7 state primary. Voters were also forced to endure difficult conditions, including shuttered polling places and long lines.

Voting rights advocates warn that failing to guarantee alternatives to in-person voting amid a national health emergency will ultimately lead to a surge in disenfranchisement, especially among communities of color and poverty-stricken Americans. Across Wisconsin, voter turnout remained relatively high, with estimates showing that it was up 34 percent over the 2012 presidential primary and about equal to 2008. But voters of color encountered more difficult conditions. In Milwaukee, which is home to two-thirds of the state’s black population, only five of 180 polling stations were open on Election Day.

“The chaos in Wisconsin is exhibit A for why the U.S. needs to adopt universal vote by mail & every state should send a ballot to all registered voters or else we’ll see voter suppression on an unprecedented scale in November,” voting rights expert Ari Berman wrote on Twitter.

As of now, 34 states allow voters to cast absentee ballots by mail without providing a reason. They include Virginia, which earlier this month removed the requirement that voters provide a reason for being unable to vote in person when requesting absentee ballots, and Georgia, which is mailing absentee request forms to nearly 7 million voters ahead of the state’s May primary. Of the other 16 states that bar unexcused absentee voting, nine are in the South: Alabama, Arkansas, Kentucky, Louisiana, Mississippi, South Carolina, Tennessee, Texas, and West Virginia. However, Alabama recently added the coronavirus to the list of reasons for which voters can request an absentee ballot.

Restrictions on mail-in-voting have already sparked legal challenges in some states. In Texas, for example, a district court judge last week issued a temporary injunction expanding the definition of “disability” in the state’s vote-by-mail provision to allow all registered voters to cast ballots by mail if they’re concerned about contracting the coronavirus. The lawsuit was brought by the Texas Democratic Party.

“Voting by mail is safe, secure, and accessible,” said Texas Democratic Party Chair Gilberto Hinojosa. “It allows more voters to participate in our democracy, and it’s a commonsense way to run an election, especially during a public health crisis.” However, Republican Attorney General Ken Paxton issued a statement arguing that the expansion of mail-in-voting would “undermine the security and integrity of our elections,” and he has filed a notice that he plans to appeal.

Most Americans agree that an expansion of mail-in-voting is especially needed during this public health crisis, including 57 percent of Republican voters. According to a poll by the Brennan Center for Justice, a voting-rights advocacy group, four out of five Americans believe states should give voters the option of unexcused voting by mail during the upcoming November election.

But the GOP has aggressively campaigned against expanding mail-in voting, even in the face of the deadly pandemic. With help from President Trump, who voted by mail last month in Florida’s Republican primary, Republican leaders have attacked the idea of expanded mail balloting as susceptible to fraud and said it would hurt the GOP’s chances of winning.

For example, U.S. Rep. Thomas Massie, a Kentucky Republican, said on Twitter that universal mail voting would be “the end of our republic as we know it.” Georgia House Speaker David Ralston (R) said that it would be “extremely devastating to Republicans and conservatives in Georgia,” while North Carolina Senate President Pro Tem Phil Berger (R) said, “There is zero trust that this process would be fair and transparent.” And Alabama Gov. Kay Ivey has said that it “raises the potential for voter fraud.”

However, there’s little evidence of a strong partisan effect from voting by mail. In fact, a recent study from Stanford University found that no party enjoys an advantage when a state shifts to universal vote-by-mail.

There’s also little evidence of significant fraud related to mail-in voting, which the U.S. military has used since the Civil War. A comprehensive 2012 study of voter fraud found that of all the cases identified in the U.S. between 2000 and 2012 only 491 involved absentee ballots.

Notably, the only incident of large-scale mail-in voting fraud affecting an election in recent history was an absentee-ballot scheme in North Carolina’s 9th Congressional District race in 2018 that benefited the Republican candidate.

Republicans’ misleading claims about mail-in ballots fit with a decade-long GOP campaign to stoke fears of fraud to sell policies that suppress the vote. Since the 2010 Republican wave gave the party control over legislatures across the South, the GOP has cited voter fraud to justify passing laws such as voter ID that have been shown to curb voting and have a disparate impact on the voting power of African Americans, Latinos, women, and young people.

The Republican push to limit voting intensified after 2013, when the U.S. Supreme Court in the Shelby County v. Holder case out of Alabama weakened the Voting Rights Act of 1965 by effectively striking down the requirement that states which have violated the VRA must get federal preclearance before implementing new voting policies. In Shelby’s wake, 11 of the 13 Southern states adopting restrictive new voting measures.

Of course, voting by mail is not without its problems. Voting rights advocates note that a shift to all-mail-voting could hurt communities of color because of poorer mail service and language barriers; people with disabilities, who often rely on accessible voting stations and assistance from poll workers; and younger voters, who lack guidance around absentee ballots. According to the U.S. Election Assistance Commission (EAC), more than 430,000 mail-in ballots were rejected in 2018 because of minor discrepancies like mismatched signatures, missing addresses, and incorrect birth years — and these uncounted ballots were overwhelmingly from younger, poorer, and non-white Americans. During the 2018 mid-term election in Gwinnett County, Georgia, 14.8 percent of Asian-American voters, 8 percent of Black voters, and 4.3 percent of Latinx voters had their absentee ballots rejected, compared to 2.5 percent of white voters, reports the Lawyers’ Committee for Civil Rights Under Law. Experts say that a move to 80 percent mail-in voting nationally could lead to 25 million voters being disenfranchised if safeguards are not put in place.

To keep that from happening, voting rights advocates have called for measures to be put in place ahead of the general election to protect voters who choose to cast their ballots by mail. They include having the government provide prepaid postage so those costs aren’t effectively a poll tax, reforming signature-matching laws, and allowing voters an opportunity to fix discrepancies before their ballots are rejected.

But civil rights groups note that voting by mail is no panacea, and that the current crisis has created an urgent need to embrace multiple electorate-expanding voting policies that have been advocated for years, including online voter registration, the relaxation of strict voter ID laws, making Election Day a holiday, and expanding early voting. Advocates have also called for guaranteeing viable in-person voting options in order to ensure that individuals from marginalized communities are not locked out of the election.

Some states have begun to implement these changes ahead of the November elections. Last month, for example, North Carolina’s executive branch expanded online voter registration options because of COVID-19 outbreak. This month, Virginia lawmakers passed legislation that makes Election Day a holiday, removes the photo ID requirement, and expands early voting. And this week, the Texas Democratic Party announced that it plans to send voter registration applications and postage stamps to everyone who requests one through a new website, regardless of party.

“Just like there is not one way to suppress the vote, there is not one intervention that is going to magically make all the limitations in the system go away,” said Myrna Pérez, director of the Brennan Center’s voting rights and elections program.

This article was originally published by Facing South.