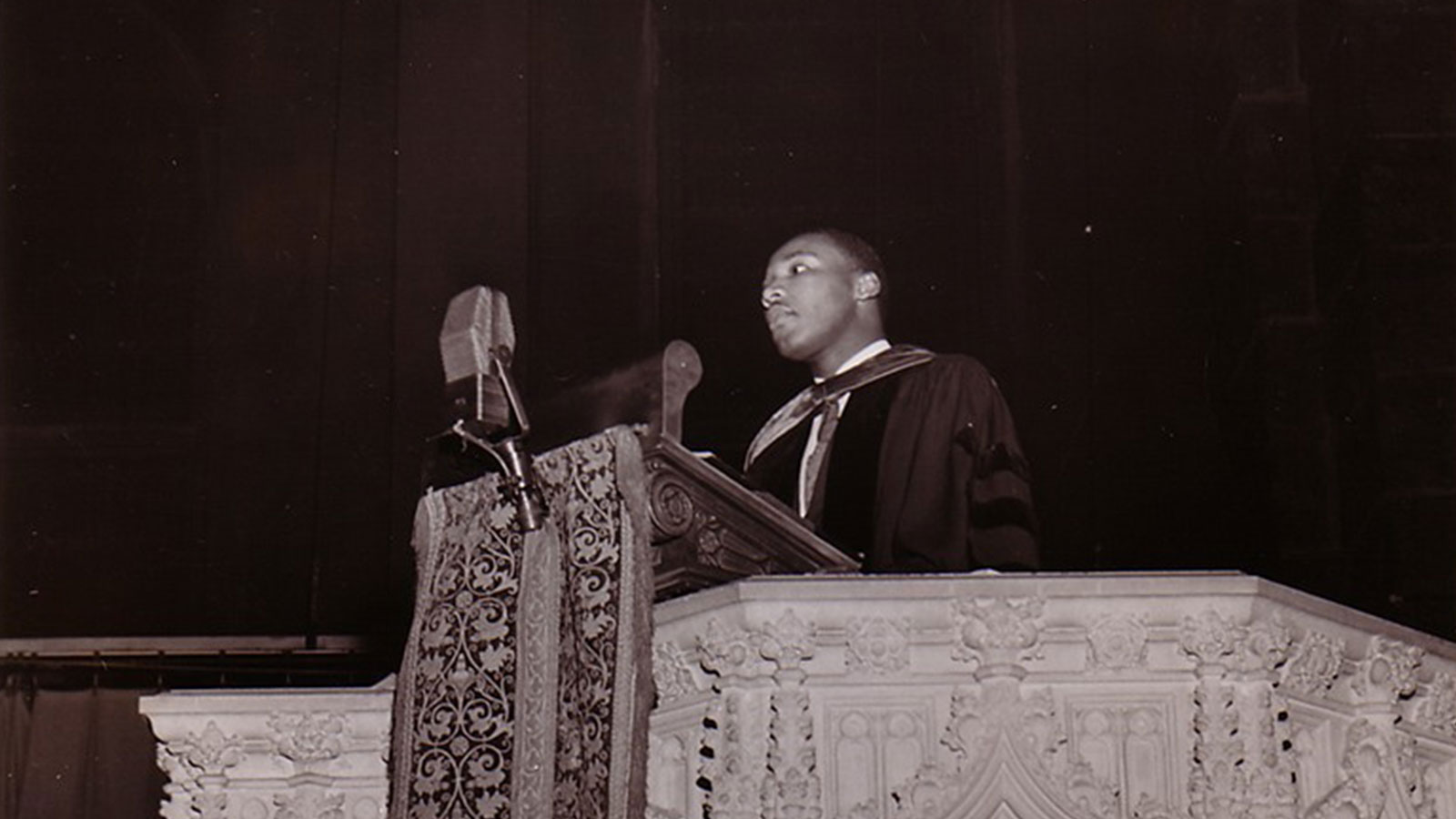 The Kind of Revolution That Martin Luther King Jr. Envisioned

His last Sunday sermon reminds us about the perils of not being woke.

In 1968, four days before he was shot on the balcony of the Lorraine Motel in Memphis, the Rev. Dr. Martin Luther King Jr. delivered his last Sunday sermon at the Washington National Cathedral in Washington, D.C. It was entitled, “Remaining Awake Through a Great Revolution,” and although King doesn’t say the word “woke,” he uses the concept as it was understood by many Black folks then, well before the term was co-opted by the political right to refer to any left-leaning policy that it wanted to condemn. The sermon is an opportunity to encounter the real King, who is too often obfuscated by politicians who use his legacy to support their own agendas. They contend that King was “colorblind,” when in fact his policy aims were unapologetically color-conscious. King opened his sermon by recalling the well-known story of Rip Van Winkle, the character in the Washington Irving book of the same name who slept for 20 years. King notes that when Rip went to sleep, King George III reigned, and when he awoke, George Washington had become president. Rip Van Winkle had slept through the revolution. King believed that too many Americans, especially those in its churches, were also snoozing through a time ripe for transformation. They needed to wake up to the injustice all around them and make demands for change.

What kind of revolution did he envision? King often focused on the financial impacts of white supremacy and the need for America to make amends for its exploitation of Black labor. In the “awake” sermon, King gave a basic and compelling case for reparations based on the “debt” this country owed its Black citizens. He said:

There are those who still feel that if the Negro is to rise out of poverty, if the Negro is to rise out of slum conditions, if he is to rise out of discrimination and segregation, he must do it all by himself … But they never stop to realize the debt that they owe a people who were kept in slavery 244 years. In 1863 the Negro was told that he was free as a result of the Emancipation Proclamation being signed by Abraham Lincoln. But he was not given any land to make that freedom meaningful. It was something like keeping a person in prison for a number of years and suddenly, suddenly discovering that that person is not guilty of the crime for which he was convicted. And … you don’t give him any money to get some clothes to put on his back or to get on his feet again in life.

For King, waking up is not simply understanding that racism is bad; it is acknowledging that racism created generational wealth for white Americans and robbed Black Americans of the same economic boost. The racial wealth gap King highlighted in his sermon not only persists, but, according to some studies, is basically the same as it was in 1968. In his sermon, King pointed out that at the same time that this country didn’t offer any assistance to Black people, it was giving away millions of acres of land in the West and the Midwest to whites.

But not only did it give the land, it built land-grant colleges to teach them how to farm. Not only that, it provided county agents to further their expertise in farming; not only that, as the years unfolded it provided low interest rates so that they could mechanize their farms. And to this day thousands of these very persons are receiving millions of dollars in federal subsidies every year not to farm.

We tend to focus on King’s impact on the thoughts of individual Americans and think of Martin Luther King Jr. Day as a chance for us to disavow racist ideas. One popular quote of King’s is, “I have also decided to stick with love … Hate is too great a burden to bear.” Rejecting hate, then, becomes his entire message, and progress toward King’s dream means more Americans thinking the right things about race. But having positive thoughts, or, at least claiming to do so, doesn’t cost anything. For African Americans, justice has always been more than affirmations of our worth. Justice encompasses economics and makes demands on the pocketbook. It was precisely King’s analysis of the economics of racism that made him controversial while he was alive. King believed that African Americans had a particular case for reparations because of slavery, but he also argued that the United States had a moral obligation as a part of an interconnected society to attend to suffering people beyond its borders. He did not draw a distinction between poor Black descendants of slaves and other oppressed people. In the National Cathedral sermon, he said:

We are challenged to rid our nation and the world of poverty. Like a monstrous octopus, poverty spreads its nagging, prehensile tentacles into hamlets and villages all over our world. Two-thirds of the people of the world go to bed hungry tonight … I’ve seen it in Latin America; I’ve seen it in Africa; I’ve seen this poverty in Asia.

While the distortions of a resurgent Christian nationalism give theological cover to valuing American lives over others, including when politicians use migrants for political props, we need to remember King’s global vision. It was rooted in his understanding of a Christian faith that focuses its attention outward toward the hurting. One of the more shocking turns in Christian discourse today has been the ability to turn transnational concern into a reason for suspicion rather than a manifestation of God’s wide-ranging affection. Instead of asking what country people hailed from to determine their worth, King asked the biblical question, “Who is my neighbor?” And he answered it using the logic of the good Samaritan: My neighbor is the person in need.

In recent years King’s argument has been taken up by others. The historical and practical case for reparations has been laid out by Ta-Nehisi Coates. The state of California has created a task force to address the issue. Just last month, the public theologian Ekemini Uwan made the Christian case for restitution for African and African-descended people at the United Nations office in Geneva, explicitly evoking the Black church’s tradition of economic advocacy. Her claim was that not just countries, but Protestant and Catholic churches, in particular, owe a debt for their role in the slave trade. But the war on “wokeness” will no doubt continue. Its power lies in its ability to erase history and context, to act as if the inequalities that persist sprang into existence haphazardly and require only redoubled efforts of the poor to bring about change. That is the reason for eliminating the discussion of the troubled parts of our history from the classroom. Learning about how our past led to the sufferings of today inevitably raises questions of present responsibility. King’s words remind us that injustice leaves a legacy. It creates inequalities that do not simply disappear. And we need to use that knowledge to chart the long and winding path toward justice.

This is the last Sunday sermon of Reverend Doctor Martin Luther King, Jr. He delivered his final Sunday sermon on March 31, 1968, from the Canterbury Pulpit at The Cathedral Church of Saint Peter and Saint Paul in the City and Diocese of Washington, commonly known as Washington National Cathedral, 3101 Wisconsin Avenue, N.W., Washington, District of Columbia, United States of America.

Featured image: Martin Luther King, Jr. preaching from the Cathedral’s pulpit on May 17, 1956 (The Cathedral Archives).