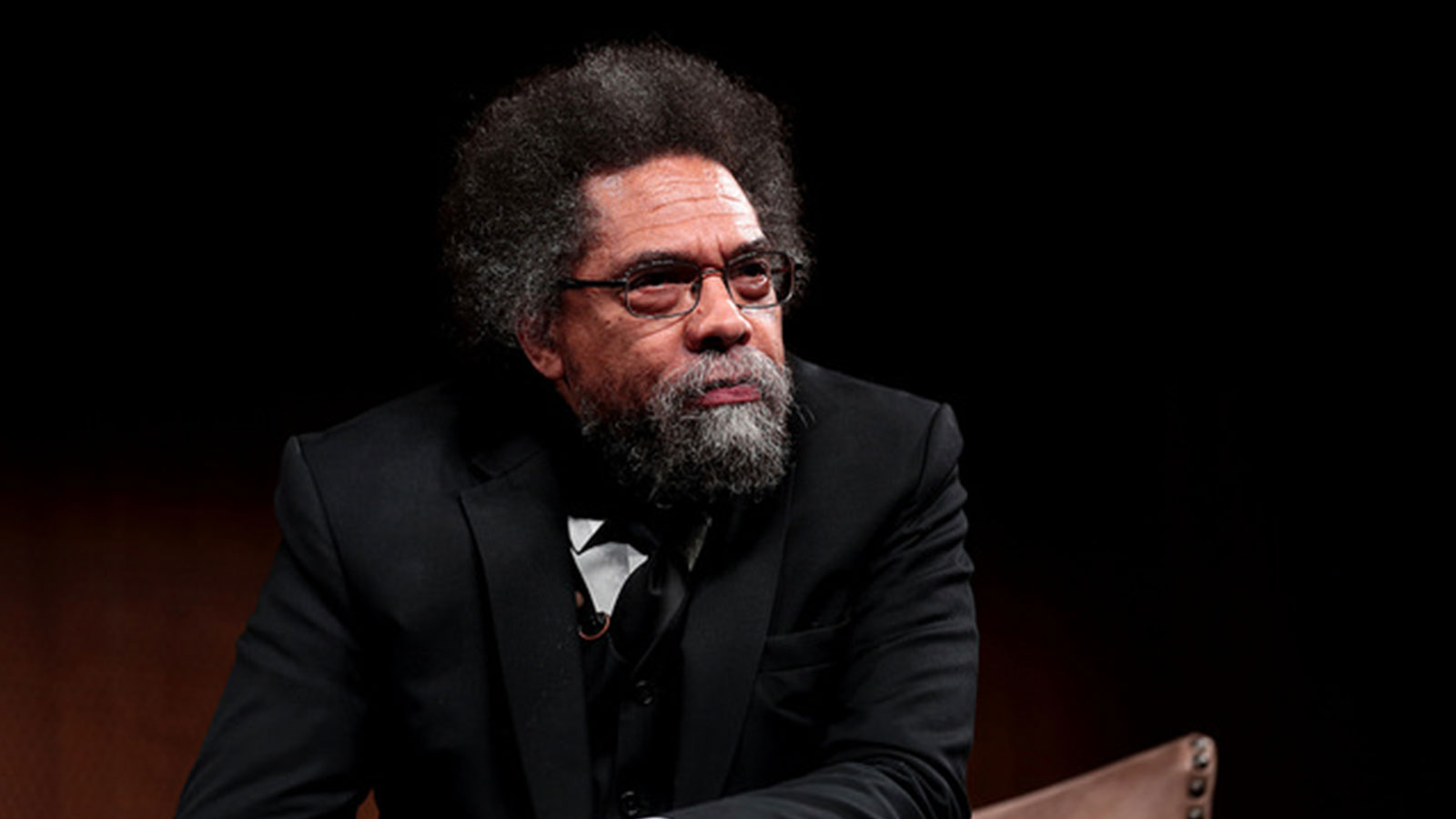 Brother Martin Was a Blues Man

You Are Here: Home » Blog » Editors' Choice » Brother Martin Was a Blues Man

Editor’s Note: In February 2018, the Cambridge Public Library hosted a conversation between Harvard University professors Tommie Shelby, Brandon M. Terry, Elizabeth Hinton, and Cornel West. The occasion was the publication of two books, To Shape a New World: Essays on the Political Philosophy of Martin Luther King, Jr., published by Harvard University Press, and Fifty Years Since MLK, published by Boston Review. This podcast presents a small selection of Cornel West’s remarks on King’s politics, life, and dream. An edited selection of his comments are below.

Boston Review · MLK and the Blues: A Conversation with Cornel West

Cornel West: Three different quotes from Brother Martin: “I’d rather be dead than afraid.” How many people could really say that? That Negro could, given all his flaws, he’s fallen, he’s finite. The only thing that breaks the back of fear is love. Love of truth, goodness, beauty, neighbor, and for some of us who are revolutionary Christians, love of enemy. That’s the only thing that breaks it. And for black people who have been taught to hate themselves, if you love yourself and love your neighbor and justice, you’re willing to give it all, to tell the truth, engage in witness bearing and not for popularity, but in the name of integrity—that’s Brother Martin.

Militarism was his critique of the American empire.

He goes on to say: “What you’re saying may get you a foundation grant, but it won’t get you into the kingdom of truth.” That’s the beginning of an understanding of black leadership and progressive leadership in the last thirty years. It speaks to their willingness to adjust to a neoliberal order in order to gain access to funds and money and give up on focusing on poor people, working people, and those in the hood, locked in mass incarceration, indecent housing, decrepit education, massive unemployment and underemployment. Turn your back, opt for success, be the successful one and ask for poor people to live vicariously through you. That’s not just Hollywood, but we can start there. It’s a neoliberal way of understanding the world: smartness, riches, and bombs in terms of imperial policy.

The third quote: “I am . . . greatly saddened, for . . . the inquirers have not really known me, my commitment or my calling.” He means to say, “I am not primarily a civil rights activist, I am not primarily a peace activist, I am trying to be a Christian. I believe in the excellence of Christian ministry, which means that I am going to love everybody and translate that love into a truth telling and a witness bearing and it doesn’t fit any political or ideological category.” That’s Martin. That’s one of the reasons why most academics have to end up domesticating that brother, they end up sanitizing and sterilizing that brother, because he’s too complex.

Militarism was his critique of the American empire. For him, a Vietnamese baby has the same value as an American baby. That’s when they said, “You ain’t nothing but an extension of Radio Hanoi. You are a communist.” And then what happened? Black preachers turned away from him, didn’t allow him to speak at the pulpits anymore. The New York Times, New Yorker, Atlantic Monthly, New Republic, exemplary liberal—these days, neoliberal—institutions . . . don’t want to tell the truth. They act like they are so progressive—but they pushed Martin aside. 72 percent of Americans disapproved of Martin when he was shot in Memphis and 50 percent of black Americans disapproved of Martin when he was shot. We should never forget that. We all love him now that the worms got his body. But when he was speaking the truth, he was radically unsettling folk. And he was willing to be unpopular precisely because he loved the people so. It wasn’t a political commitment, it was spiritual, it was religious, and, in his case, it had to do with his love of a Palestinian Jew named Jesus that changed his petty, bourgeois, Negro life. He put calling before career, vocation before profession, and his life task before the job that he had.

King was a sweet man. To think of Martin Luther King, Jr. is to think of Eddie Kendricks singing “Just My Imagination.” There is a sweetness to him. That’s King. You can’t talk about being a loving warrior and not be kind and sweet. And gentle. That’s what he was. But he was also harsh because he had a spine, he had a backbone, he was willing to pay a cost. Never forget that when he was in that paddy wagon on his way to the prison—four-and-a-half hours in the dark with a German shepherd . . . grabbing him—and when he got out he couldn’t walk in a straight line, it looked liked he had a breakdown. All he could say was “This is the cross we must bear for the freedom of our people.” Where do you get that kind of spiritual determination? Not from hatred or revenge, but from hope. Hope is a stepping out on nothing and landing on something. It’s not just looking what the evidence says. Because that’s the kind of human being you choose to be. And you could heard it in his mother, Alberta, and Daddy King. You could hear it in Benjamin Mays, you could hear it in his wife, you could even hear it in the Boston University professors at the school of theology, they shaped his soul in that way.

72 percent of Americans and 50 percent of black Americans disapproved of Martin when he was shot. We should never forget that.

Despair is not a bad thing. He or she who has never despaired has never lived. Anyone who looks at the history of the world and doesn’t have some element of despair—something’s wrong with you. Despair means you have a sensitivity. But what King hated was when despair had the last word. He comes from a blues people, where catastrophe is always confronting you every minute of your life—institutional catastrophe and personal catastrophe. But you take that catastrophe and you reshape it with your compassion and with your creativity into a style and a smile, like BB King, and Ma Rainey and Bessie Smith, Billie Holliday and Coltrane and Kendrick Lamar—he’s a blues man, he’s just doing his hip hop thing. You can see him wrestling with catastrophe but not allowing despair to have the last word, but despair must be heard. It must be heard. Because that’s what it to be human. All of us wrestle with catastrophe in that sense.

But if all there is gets caught up in the pessimism, then you’re paralyzed, then you’re debilitated, then you end up being a spectator rather than a participant. And spectatorial cynicism is one of the preconditions of . . . the American empire. Everybody is sitting back and observing and doesn’t want to jump into the mix and do anything, or organize or mobilize, even if it looks like we have to cut against the grain. And that’s precisely what the escalating neo-fascist elites want. All of these “good folks” being cynical and pessimistic, thinking they can’t do anything, while they deal with dysfunctional development and the plutocrats rule, while they deal with 53 cents of every dollar going to the military industrial complex and escalating drone strikes under Democrat and Republican presidents. That kind of despair, that kind of cynicism. The flip side of cynicism, according to the great Oscar Wilde, is what? Sentimentalism. And what did Baldwin say about sentimentalism? It’s the cultivation of spurious emotion with no intent to engage in the moral execution of any ideas. And America says, “We so good. We so innocent. We can’t help but be headed towards a more perfect union.” That’s a lie. America can go crypto-fascist the way any other nation can—especially if one generation becomes so cynical that they don’t fight for freedom and democracy. There ain’t nothing special about America. Brother Barack said here it in Boston didn’t he? “America is a magical place.” That brother is going to have a Christopher Columbus experience soon, I tell you. There is nothing magical about America. If the younger generation doesn’t fight for freedom and democracy, then you lose it. So cynicism and sentimentalism, same coin, just two sides. Here come the blues. Catastrophe.

The great rabbi Abraham Joshua Heschel said it so well—one of the few friends who stayed with him until the end—he said the future of America depends on the response of America to the legacy of Martin Luther King, Jr. If you don’t deal with racism, poverty, militarism, and materialism, you’re going to lose your American democracy, you’re going to end up with neo-fascism, with narcissistic proclivities somehow dictating a culture driven by mendacity and criminality, and acting as if they are making America great.

This marvelous new militancy in young people across race and class will give us a new King.

Predatory capitalism will colonize and commodify anything: the sacred, the profane, you, me, your mama, and my brother. So then the question arises: How do we use Martin? Because we don’t have a socialist project that’s credible at the moment. How do you use Martin in such a way that non-market values and visions—love and justice—can become operative? It’s only by example. Martin Luther King, just like Du Bois, just like Eugene Debs, or Bernie Sanders, become visible when human beings come together with courage, vision, a willingness to sacrifice and serve the most vulnerable, and bring back the words with a vitality and a vibrancy in their lives, in their actions, in their deeds, and in the words. For example, the Movement for Black Lives, they’ve got a very different Martin too. They’ve got a very different Malcolm. You can’t talk about Martin without talking about Malcolm, you can’t talk about Malcolm without Ella Baker, you can’t talk about Ella Baker with Fannie Lou Hamer, and it goes on and oe. Because no one of these individuals made the movement. As Ella said, “the movement made them.”

So I want to say to you, I think we can expect with this magnificent marvelous new militancy in young people across race, across class, there is a spiritual and moral awakening. The Movement for Black Lives is one slice of it, you have got young folks in Florida, you have got women—and I’m not talking about middle-class, corporate feminists—I’m talking about women on the ground, poor and working people at the center, especially trans and lesbian sisters, at the center. Those new flows of social motions, they’re not social movements yet, but that social motion will give us a new King.