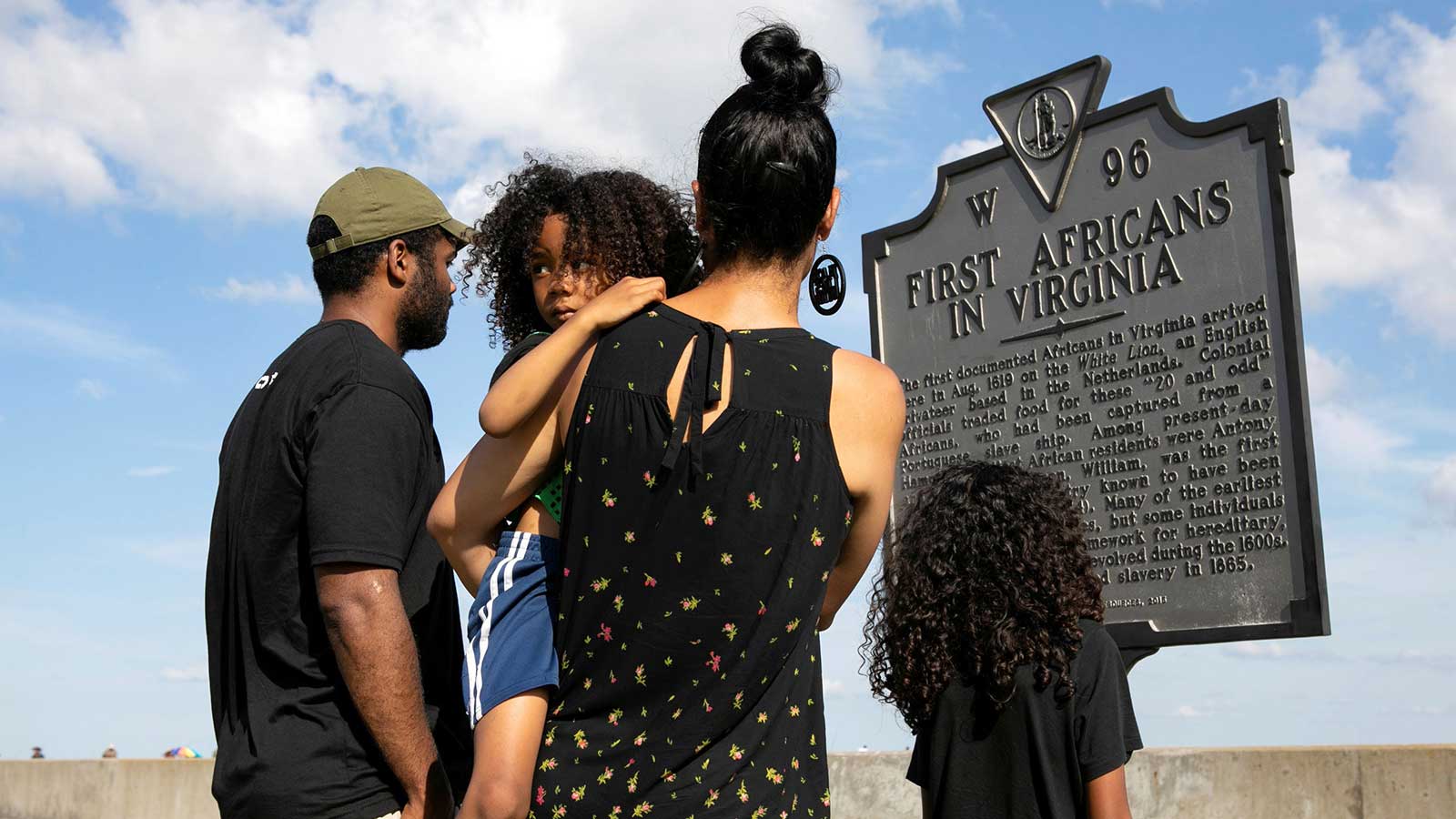 The Republican Party, Racial Hypocrisy, and the 1619 Project

You Are Here: Home » Blog » Editors' Choice » The Republican Party, Racial Hypocrisy, and the 1619 Project

As the G.O.P. seeks to deny Americans knowledge of their own history, Nikole Hannah-Jones is denied tenure.

By Jelani Cobb, The New Yorker

Late last month, when Senator Tim Scott, of South Carolina, delivered the Republican response to President Joe Biden’s first major address to a joint session of Congress, the subtext could scarcely have been closer to the surface: the sole Black Republican in the Senate was speaking on behalf of a Party that, under the increasing influence of the far right, has embraced a brand of belligerent and overt racism that was naïvely thought to have been banished from American politics. In the midst of a fairly straightforward conservative critique of Biden’s policies and priorities, the senator detoured into a complaint about liberals whom he said had called him racial epithets—he graciously declined to call them “the real racists”—and claimed that progressives are intent on teaching people that, “if they look a certain way, they’re an oppressor.” He defended the G.O.P. voter-suppression bills that have swept the nation in the wake of Donald Trump’s defeat, and stated his case plainly. “America,” he said, “is not a racist country.”

This was a stunning display of cynicism, even by the standards of the current G.O.P., yet this was not the first time that Scott’s race had been utilized so disingenuously. A month earlier, he said on Fox News that “woke supremacy is as bad as white supremacy,” a kind of equivalence that could be dismissed as political pandering had Scott not been a friend of the late Reverend Clementa Pinckney, the South Carolina state senator and pastor who was gunned down in the Emanuel A.M.E. Church, in 2015, by Dylann Roof, a white supremacist who dreamed of a race war. Scott was also the man whom the G.O.P. turned to when, in the wake of Trump’s comments about the Charlottesville crisis, they decided that the President needed to be tutored in matters of race. (Ahead of that meeting, Scott said, “Racism is real. It is alive.”) The absolution that Scott offered the nation in his rebuttal to Biden sparked an online discussion about how much racism it takes for a country to be considered racist, but, in some ways, that question was beside the point. The real significance in Scott’s words lay in their connection to a broader offensive that the Republican Party has been coördinating since Trump’s reëlection loss, in November.

In a poll in June, 2020, fifty-two per cent of Americans said that they considered Trump a racist. His candidacy famously emboldened white nationalists, as evidenced by the tiki-torch crusade in Charlottesville, the racist motifs of the January 6th attack on the Capitol, and his astounding directive to the Proud Boys, delivered during the first Presidential debate last year, to “stand back and stand by.” Since the murder of George Floyd last May, the nation has grappled publicly with its racist legacy and, to a considerable degree, with the extent to which Trump and the G.O.P. had made matters worse in the preceding three years. Books such as Ibram X. Kendi’s “How to Be an Antiracist” and Robin DiAngelo’s “White Fragility” rocketed up the best-seller lists.

In response, many on the American right decided to change the subject. If they could not market themselves as racists, they could certainly make a profitable brand as anti-anti-racists. (They have oddly chosen to lump all things racial and contemptible under the banner of critical race theory, a school of legal thought concerned primarily with inequality and the failures of civil-rights litigation to ameliorate it.) The objective here is not only to launder the G.O.P.’s reputation—though that is part of it—but also to facilitate the more overtly racist portions of the Party’s agenda. The left, in this light, is not simply advocating equality of people regardless of their backgrounds; it’s a cabal seeking to marginalize and browbeat white people for having created a bigoted society that does not actually exist.

Before Trump lost reëlection, he issued an executive order banning federal diversity initiatives that involve anti-racism training. Corollaries to that directive began taking root earlier this year, as bills to ban anti-racism training and to penalize public schools for teaching the 1619 Project were introduced in Republican-controlled state legislatures. (In April, the Iowa senate passed legislation sharply restricting what can be taught in diversity trainings at state and local entities.) Last summer, Senator Tom Cotton, of Arkansas, launched both a Twitter crusade against the 1619 Project and an ultimately failed effort to pass federal legislation that would ban it from being taught in schools nationwide. In an interview with the Arkansas Democrat-Gazette, he said that the Founders saw slavery as a “necessary evil,” a point which elicited a response, on Twitter, from the 1619 Project’s creator, Nikole Hannah-Jones, who wrote, “its hard to imagine what cannot be justified” given that Cotton had essentially justified rape, torture, and the selling of human beings.

It is worth noting that the 1619 Project, which first appeared in the Times Magazine almost two years ago, on the four-hundredth anniversary of the arrival of the first African captives in the British colonies in North America, stirred currents that were not entirely unfamiliar. Twenty-six years ago, on the fiftieth anniversary of the bombings of Hiroshima and Nagasaki, similar discord greeted renewed arguments that the release of two atomic bombs which immolated some hundred thousand people, most of them civilians, was a stain on this nation’s history. Three years before that, the five-hundredth anniversary of Columbus’s arrival in the Western Hemisphere again stirred contentious debate about his role as a herald of colonialism, slavery, and genocide of the indigenous populations of the West Indies.

A very specific divide animated these conflicts, and it underlies the G.O.P.’s current efforts to rescue Americans from an accurate account of their own history. A growing body of progressive white scholars and scholars of color have spent the past several decades fighting for, and largely succeeding in creating, a more honest chronicle of the American past. But these battles and the changes they’ve achieved have, by and large, gone unnoticed by the lay public until benchmark anniversaries occurred, and the scholarship collided with a public unsettled by how distinct that version of history was from the anodyne tales they imbibed in school. Claims of “revisionist history” greeted each of these moments, but this, too, missed the point. History exists in a constant state of revision, as we learn more about the present and the worlds that preceded it. This is why contemporary books about Presidents Ulysses S. Grant and Harry S. Truman take a different, and far more laudatory, view of their subjects than do books written closer to their lifetimes. Revising history is the whole point of having historians. Scholars, including some whose work has offered correctives to the whitewashed history of race, have debated in good faith about some aspects of the 1619 Project. More significant, though, is that the argument the project presented fell within the spectrum of established views.

But the aversion to unflattering truths can be made into political currency. Trumpism established the profitability of telling wholesale lies; the G.O.P. has realized that those lies need not be told only about the present. Recently, as the Texas Tribune reported, Texas introduced a bill that prohibits the teaching that any race is superior or inferior to another—an ostensibly respectable principle, but the bill was ultimately concerned with an imaginary world in which white people were actually the victims in need of protection from racism.

The narrative took another turn last week, when it was revealed that the board of trustees of the University of North Carolina at Chapel Hill declined to extend tenure to Nikole Hannah-Jones. Normally, the byzantine workings of academic-tenure review are of little pertinence to anyone beyond the individuals involved. But the nature of Jones’s work, combined with the ongoing assaults from the right on any scholarly or journalistic examination of race, has given her case particular significance. Jones holds a MacArthur award, a Pulitzer Prize, two Polk Awards, a Peabody Award, and three National Magazine Awards. In many cases, this would be an impressive tally for an entire journalism department. Her tenure as the school’s Knight Chair in Race and Investigative Reporting was supported by the Hussman School of Journalism and Media’s tenure committee, its dean, and the chancellor of the university. The board’s intervention was an override of multiple tiers of faculty governance in a way that to many smacked of politics. In fact, when asked to explain the decision, an unnamed board member used exactly that word—politics—to sum up what had happened.

The implications here are also transparent. Jones, who is a staff writer for the Times Magazine, will likely not be greatly affected by the board’s decision. But younger, untenured scholars, whose work touches on potentially controversial themes, will undoubtedly find this incident intimidating. And the U.N.C. situation appears a logical outcome of the G.O.P.’s campaign. The Party, in seeking to discredit work examining the durability of racism, clears a path to pursue white anxiety and racial-resentment politics in the Trump mold. The irony in all this is that, in attacking anti-racism for these ends, conservatives are validating the very contentions that progressives have been making all along: that racism remains a vital force in American life, that it is deeply rooted in the American past, and that our politics have been shaped, with disastrous consequences, by efforts to utilize racism for political profit. Thus, the current G.O.P. is seeking not only to absolve Americans of the worst practices of their history but to do so while resurrecting the very practices that were cause for indictment in the first place.