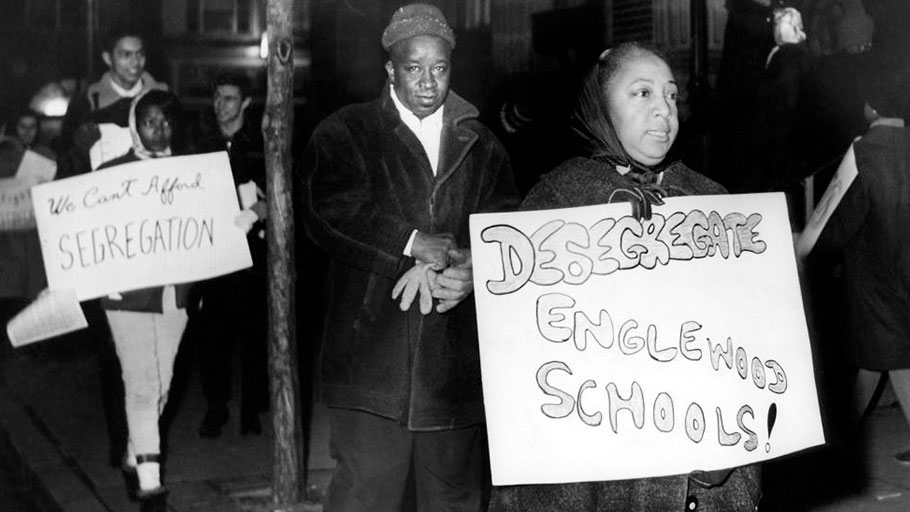 The resegregation of America

You Are Here: Home » Blog » Editors' Choice » The resegregation of America

If you want to get a good measure of the intense racial segregation of Washington, D.C., just head southeast on the Green Line subway around 5 p.m. Once that train leaves the L’Enfant Plaza station, it will reflect the demographic fact that east of the Anacostia River, the city is overwhelmingly black.

This sort of thing is not at all uncommon. Indeed, a recent study of metropolitan segregation found that D.C. is actually towards the middle of the pack in terms of segregation — considerably better than the most segregated American city, Milwaukee. It’s also no accident — segregation everywhere reflects residues of deliberate government policy, mainly in the form of enormous subsidies of white enclaves, and measures to corral black residents in impoverished ghettos. The least segregated cities are generally newer ones, built after redlining and other forms of discriminatory policy were repealed.

Let me start with schools. After the civil rights movement, liberals generally agreed that something needed to be done to remedy the legacy of Jim Crow in addition to restoring voting rights for African-Americans in the South. Black schools, in particular, were systematically overcrowded and underfunded. One common solution for hundreds of school districts trying to comply with federal court orders to desegregate was to shuffle some students around between districts to create a reasonable racial balance.

In a truly classic American tradition, whites across the country — South and North alike; Boston’s Louise Day Hicks was probably the most prominent anti-integration activist — reacted with purple-necked fury. They coined a slogan which supposedly described their resentment: “forced busing.” The implication was that this new use of busing was coercing parents and children into attending schools other than their local neighborhood schools. It fit nicely into developing neoliberal notions of government policy being illegitimate intrusions into “natural” free market outcomes.

Unfortunately, as Matt Delmont shows in his brilliant book Why Busing Failed, all this anti-busing rhetoric was duplicitous garbage. As Jake Blumgart summarizes:

The number of children transported to school by bus had been increasing steadily for decades before Brown v. Board of Education, often as a means to enforce segregation. (The plaintiff in Brown was bused 20 miles to a majority-black school despite the majority-white school four blocks from her home.) In Boston, 85 percent of high school students were bused before school integration efforts began. Only when the form of transportation became associated with desegregation did some parents object to it and heap praise on “neighborhood schools.” [Slate]

These court orders worked quite well at cutting segregation. But — assisted by the widespread acceptance of the ridiculous “forced busing” frame — the racist backlash resulted in several anti-integration bills passing Congress, and most school districts eventually wormed their way out from under court orders.

The result was quick and pervasive resegregation. A sample of 159 schools across the South began to see increased segregation levels only a few years after they were released from federal court oversight. Within about a decade, segregation levels were just as bad or worse than they had been before. An investigation into the five worst elementary schools in Florida found the exact same procedure to blame. Measured by the percentage of black students in schools that are 90 percent minority or more, segregation has increased in all regions of the country since the mid-’80s (when court orders were most common). Indeed, the Northeast’s segregation has increased compared to 1968, and is now the most segregated part of the whole country.

Fortunately, the solution is obvious. Just mandate integrated schools like before, and leave it to districts to figure out exactly how to get it done. “Which child shall go to what school?” is an inherent question of political power, and rhetoric about reducing government interference or allowing “choice” is in every instance an effort to mask a policy preference requiring the same coercive government power as any other option.

That brings me to housing. Residential segregation does not have the same “advance and retreat” recent history — instead, it’s more that we never seriously tried to fix it. Despite the fact that Census data shows most cities have been getting slightly-to-moderately less segregated over the years, it’s not remotely enough to actually address the dark legacy of racist housing policy. In most cities with large minority populations, it’s still a huge problem.

Obviously, given that neighborhoods change much more slowly than schools, this one isn’t so easy. And you wouldn’t want to simply bulldoze chunks of Anacostia and slap up luxury towers for upper-class white professionals.

Nevertheless, there are many ways to chip away at the problem in a sensible and humane fashion. Simply addressing school segregation is probably the best first step, because it removes one major motivation for white flight behavior. Federal housing subsidies of all kinds can be predicated on cities taking meaningful steps to integrate (during the Obama administration, initial steps were taken in this direction, though mainly with low-income subsidies). Indeed, many cities have done some of this of their own volition.

And instead of trying to quickly mix up neighborhoods and thereby risk displacing poorer minorities, cities can keep their affordable housing stock expanding fast enough to prevent displacement, and thereby create neighborhood integration. (For example, from 2001-2011, D.C. lost nearly 40,000 black residents, though it since has started to gain them again.) New housing developments can be incentivized to be demographically and class balanced — particularly social housing, or state-owned apartment buildings for which all residents are eligible; those can be simply required to be integrated.

All that will probably take decades. But given consistent pressure, American neighborhoods can become a satisfying blend of peoples. All it takes is the political will.