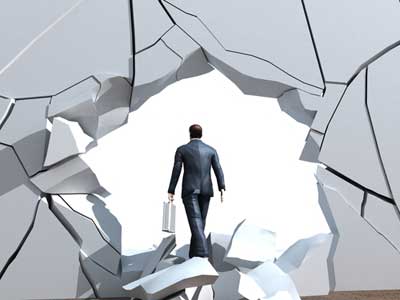 (Image: Break through via Shutterstock)

America is falling apart – and this nation’s super-rich are to blame.

There was once a time in America when the super-rich needed you, and me, and working-class Americans to be successful.

The super-rich rode on the same trains as us, and flew in the same planes as us. They went to our hospitals and learned at our schools.

Their success directly depended on us, and on the well-being of the nation, and they knew it.

But times have changed, and the super-rich of the 21st century no longer think that you and I are needed for their continued success.

And in some ways, they have given up on America, period.

As Paul Buchheit brilliantly points out over at AlterNet, “As they accumulate more and more wealth, the very rich have less need for society. At the same time, they’ve convinced themselves that they made it on their own, and that contributing to societal needs is unfair to them. There is ample evidence that this small group of takers is giving up on the country that made it possible for them to build huge fortune.”

Buchheit goes on to say that, “The rich have always needed the middle class to work in their factories and buy their products. With globalization this is no longer true… They don’t need our infrastructure for their yachts and helicopters and submarines. They pay for private schools for their kids, private security for their homes. They have private emergency rooms to avoid the health care hassle. All they need is an assortment of servants, who might be guest workers coming to America on H2B visas, willing to work for less than a middle-class American can afford”

Unfortunately, these millionaires and billionaires who have given up on America and on the working class are in control of the political process in this country.

They have brainwashed Republicans into thinking that the success of working-class Americans no longer matters for the future of this nation.

As a result, Republicans are no longer investing in things that have traditionally made America – and the working-class – successful.

Our roads are falling apart, our transportations systems are in turmoil, and our energy and electrical systems are stuck back in the 1900’s.

Non-defense related infrastructure spending was around $325 billion per year when George W. Bush stepped foot inside of the White House.

Today, it’s around $235 billion per year, a $90 billion drop in funding from when Bush took office.

Republicans, brainwashed by America’s super-rich, have repeatedly refused to fund comprehensive infrastructure spending bills, all in the name of austerity.

As Cardiff Garcia over at The Financial Times points out, “It’s also likely that much of the investment that has been forgone in the name of fiscal consolidation will have to be made eventually anyways – only it will be made when rates are higher, exacerbating the long-term fiscal outlook rather than improving it. And as Think Progress points out, “continued underfunding in this arena over the coming years will cost businesses a trillion dollars in lost sales and cost the economy 3.5 million jobs.”

The Society of Civil Engineers says that it will take a staggering $3.6 trillion investment by 2020 – or $450 billion per year – to bring the American infrastructure into the 21st century, and to avoid risking a complete infrastructure collapse.

But the super-rich don’t care about how much funding is needed to save this country, as long as they have their private schools, private hospitals, private airports and private places.

The super-rich in this country are bleeding working-class Americans dry, while destroying the infrastructure of the nation that has done so much for their success.

No matter what Jamie Dimon, Charles Koch, or Shelly Adelson will tell you, America’s wealthy elite did not make their fortunes on their own.

Without a strong economy and infrastructure, America’s millionaires and billionaires would not be where they are today. It’s that simple.

So what can we do right now to rebuild America’s infrastructure and give a boost to the American economy?

First, it’s time to bring an end to globalization.

We need to be protecting American jobs, instead of letting the super-rich ship them overseas and build factories in China and third-world countries.

But more importantly, we need to roll-back the Reagan tax cuts, and make sure that America’s wealthy elite are paying their fair share to support our economy and infrastructure.

Right now, the burden for rebuilding America is on the backs of working-class Americans, and that’s just wrong.

It’s ridiculous that working-class Americans struggling to survive day-to-day are paying more in taxes than billionaire banksters and oil tycoons.

A lot has changed in America over the past 100 years or so but one thing remains the same: The success of the super-rich still depends on the success of you and me.

Our infrastructure may be crumbling, but there’s still time to get America back on the road to success.

We’re all in this together.