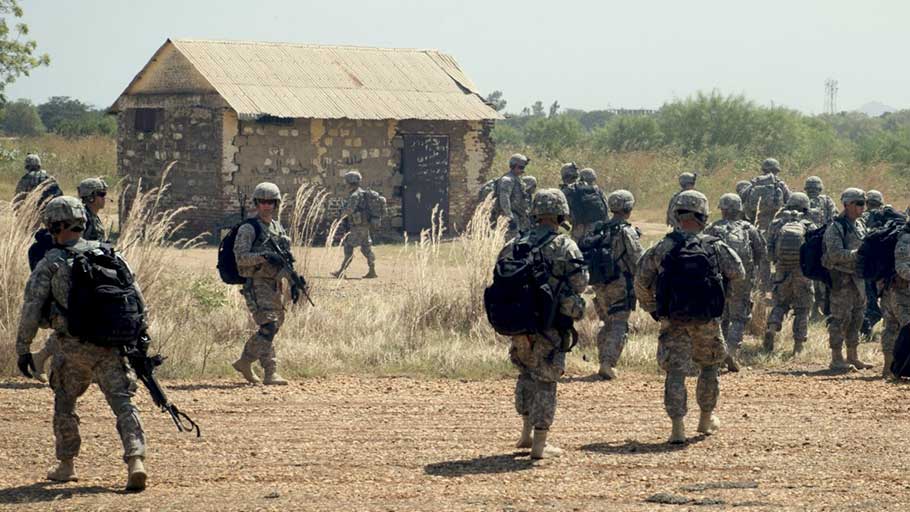 You Are Here: Home » Blog » Editors' Choice » The US Military Is All Over Africa Despite Not Being at War in Africa

There are currently roughly 7,500 US military personnel, including 1,000 contractors, deployed in Africa. For comparison, that figure was only 6,000 just a year ago.

The theft of Africa continues despite the era of colonialism and slavery being over. The west continues to steal Africa’s plentiful resources turning a wealthy continent into poor people. Al Jazeera reports:

“Africa is rich, but we steal its wealth.

“That’s the essence of a report (pdf) from several campaign groups released today. Based on a set of new figures, it finds that sub-Saharan Africa is a net creditor to the rest of the world to the tune of more than $41bn. Sure, there’s money going in: around $161bn a year in the form of loans, remittances (those working outside Africa and sending money back home), and aid.

But there’s also $203bn leaving the continent. Some of this is direct, such as $68bn in mainly dodged taxes. Essentially multinational corporations “steal” much of this – legally – by pretending they are really generating their wealth in tax havens. These so-called “illicit financial flows” amount to around 6.1 percent of the continent’s entire gross domestic product (GDP) – or three times what Africa receives in aid.

“Then there’s the $30bn that these corporations “repatriate” – profits they make in Africa but send back to their home country, or elsewhere, to enjoy their wealth. The City of London is awash with profits extracted from the land and labour of Africa.

“There are also more indirect means by which we pull wealth out of Africa. Today’s report estimates that $29bn a year is being stolen from Africa in illegal logging, fishing and trade in wildlife. $36bn is owed to Africa as a result of the damage that climate change will cause to their societies and economies as they are unable to use fossil fuels to develop in the way that Europe did. Our climate crisis was not caused by Africa, but Africans will feel the effect more than most others. Needless to say, the funds are not currently forthcoming.”  KZ 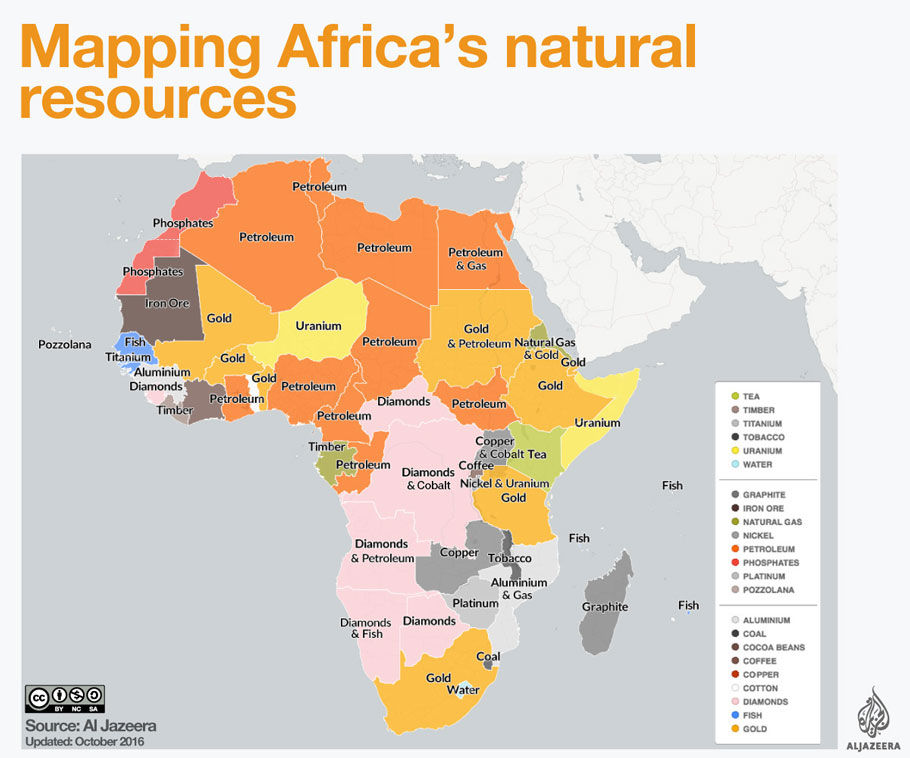 Around 200,000 US troops are stationed in 177 countries throughout the world. Those forces utilize several hundred military installations. Africa is no exemption. On August 2, Maj. Gen. Roger L. Cloutier took command of US Army Africa, promising to “hit the ground running.”

The US is not waging any wars in Africa but it has a significant presence on the continent. Navy SEALs, Green Berets, and other special ops are currently conducting nearly 100 missions across 20 African countries at any given time, waging secret, limited-scale operations. According to the magazine Vice, US troops are now conducting 3,500 exercises and military engagements throughout Africa per year, an average of 10 per day — an astounding 1,900% increase since the command rolled out 10 years ago. Many activities described as “advise and assist” are actually indistinguishable from combat by any basic definition.

There are currently roughly 7,500 US military personnel, including 1,000 contractors, deployed in Africa. For comparison, that figure was only 6,000 just a year ago. The troops are strung throughout the continent spread across 53 countries. There are 54 countries on the “Dark Continent.” More than 4,000 service members have converged on East Africa. The US troop count in Somalia doubled last year.

When AFRICOM was created there were no plans to establish bases or put boots on the ground. Today, a network of small staging bases or stations have cropped up. According to investigative journalist Nick Turse, “US military bases (including forward operating sites, cooperative security locations, and contingency locations) in Africa number around fifty, at least.” US troops in harm’s way in Algeria, Burundi, Chad, Congo, Djibouti, Egypt, Eritrea, Ethiopia, Kenya, Libya, Somalia, Sudan, South Sudan Tunisia, and Uganda qualify for extra pay.

The US African Command (AFRICOM) runs drone surveillance programs, cross-border raids, and intelligence. AFRICOM has claimed responsibility for development, public health, professional and security training, and other humanitarian tasks. Officials from the Departments of State, Homeland Security, Agriculture, Energy, Commerce, and Justice, among other agencies, are involved in AFRICOM activities. Military attachés outnumber diplomats at many embassies across Africa.

Last October, four US soldiers lost their lives in Niger. The vast majority of Americans probably had no idea that the US even had troops participating in combat missions in Africa before the incident took place. One serviceman was reported dead in Somalia in June. The Defense Department is mulling plans to “right-size” special operations missions in Africa and reassign troops to other regions, aligning the efforts with the security priorities defined by the 2018 National Defense Strategy. That document prioritizes great power competition over defeating terrorist groups in remote corners of the globe. Roughly 1,200 special ops troops on missions in Africa are looking at a drawdown. But it has nothing to do with leaving or significantly cutting back. And the right to unilaterally return will be reserved. The infrastructure is being expanded enough to make it capable of accommodating substantial reinforcements. The construction work is in progress. The bases will remain operational and their numbers keep on rising.

A large drone base in Agadez, the largest city in central Niger, is reported to be under construction. The facility will host armed MQ-9 Reaper drones which will finally take flight in 2019. The MQ-9 Reaper has a range of 1,150 miles, allowing it to provide strike support and intelligence-gathering capabilities across West and North Africa from this new base outside of Agadez. It can carry GBU-12 Paveway II bombs. The aircraft features synthetic aperture radar for integrating GBU-38 Joint Direct Attack Munitions. The armament suite can include four Hellfire air-to-ground anti-armor and anti-personnel missiles. There are an estimated 800 US troops on the ground in Niger, along with one drone base and the base in Agadez that is being built. The Hill called it “the largest US Air Force-led construction project of all time.”

According to Business Insider, “The US military presence here is the second largest in Africa behind the sole permanent US base on the continent, in the tiny Horn of Africa nation of Djibouti.” Four thousand American servicemen are stationed at Camp Lemonnier (the US base located near Djibouti City) — a critical strategic base for the American military because of its port and its proximity to the Middle East.

Officially, the camp is the only US base on the continent or, as AFRICOM calls it, “a forward operating site,” — the others are “cooperative security locations” or “non-enduring contingency locations.” Camp Lemonnier is the hub of a network of American drone bases in Africa that are used for aerial attacks against insurgents in Yemen, Nigeria, and Somalia, as well as for exercising control over the Bab-el-Mandeb Strait. In 2014, the US signed a new 20-year lease on the base with the Djiboutian government, and committed over $1.4 billion to modernize and expand the facility in the years to come.

In March, the US and Ghana signed a military agreement outlining the conditions of the US military presence in that nation, including its construction activities. The news was met with protests inside the country.

It should be noted that the drone attacks that are regularly launched in Africa are in violation of US law. The Authorization for Use of Military Force (AUMF), adopted after Sept. 11, 2001, states that the president is authorized to use force against the planners of those attacks and those who harbor them. But that act does not apply to the rebel groups operating in Africa.

It’s hard to believe that the US presence will be really diminished, and there is no way to know, as too many aspects of it are shrouded in secrecy with nothing but “leaks” emerging from time to time. It should be noted that the documents obtained by TomDispatch under the United States Freedom of Information Act contradict AFRICOM’s official statements about the scale of US military bases around the world, including 36 AFRICOM bases in 24 African countries that have not been previously disclosed in official reports.

The US foothold in Africa is strong. It’s almost ubiquitous. Some large sites under construction will provide the US with the ability to host large aircraft and accommodate substantial forces and their hardware. This all prompts the still-unanswered question — “Where does the US have troops in Africa, and why?” One thing is certain — while waging an intensive drone war, the US is building a vast military infrastructure for a large-scale ground war on the continent.