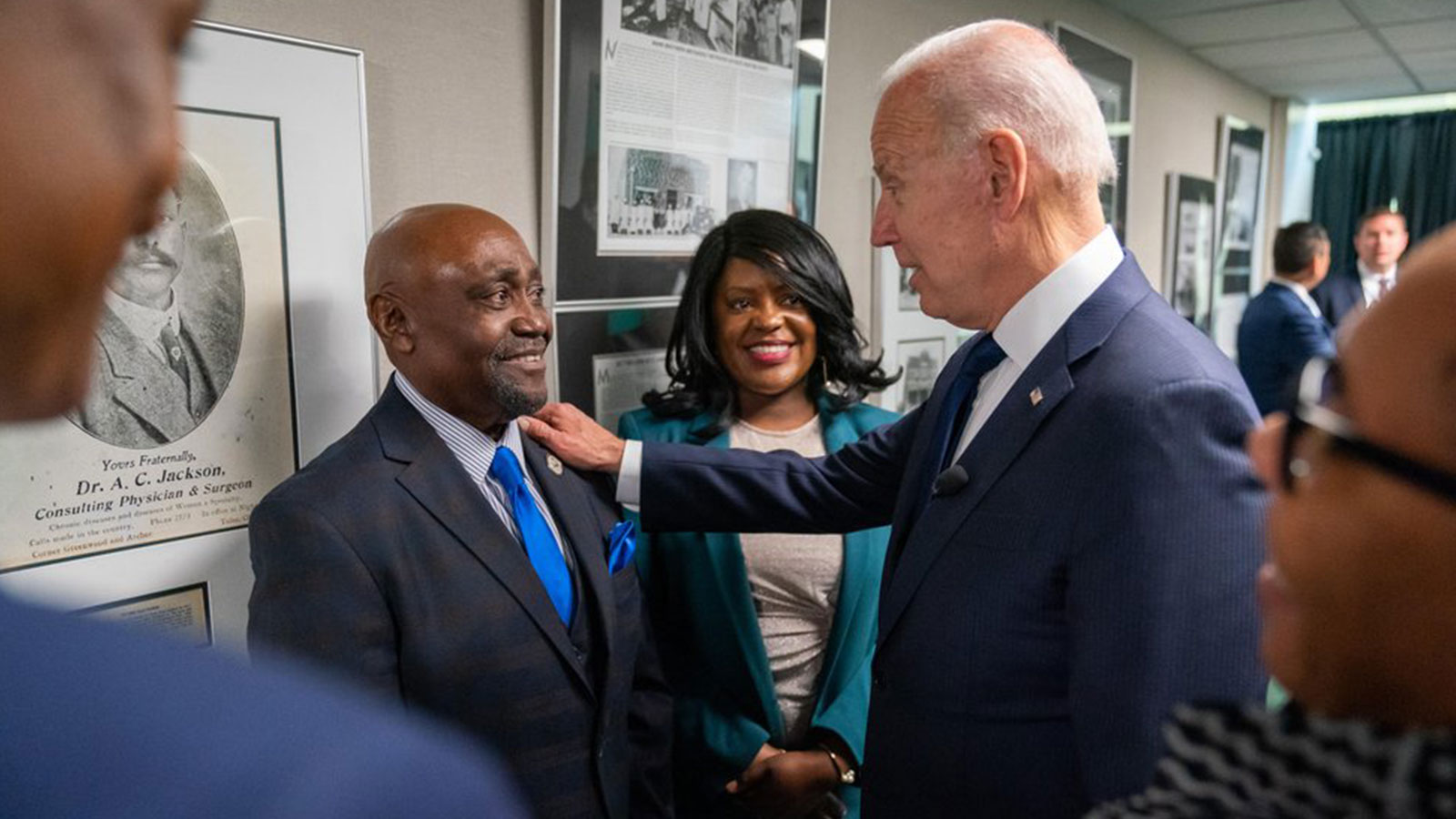 Tiffany Crutcher: What I Told President Biden in Tulsa

You Are Here: Home » Blog » Editors' Choice » Tiffany Crutcher: What I Told President Biden in Tulsa

As a descendant of the Tulsa Race Massacre, I made the case for reparations.

By Tiffany Crutcher, The Progressive —

On June 1, to commemorate the 100th anniversary of the Tulsa Race Massacre, President Joe Biden visited Tulsa’s historically Black Greenwood neighborhood. No other U.S. President had visited the site of one of the worst eruptions of racial violence in U.S. history, and Black people in Tulsa and around the nation anticipated what he would say. But before Biden gave his speech, he privately met with my father and me.

My father and I are descendants of Tulsa Race Massacre survivors. My father’s grandmother, Rebecca Brown Crutcher, ran a BBQ joint in the Greenwood district, then known as Black Wall Street. Today, Black Tulsans are crying out for reparatory justice in a city whose steep racial divides resemble innumerable communities across the United States.

I told the President that Black Tulsans
need help in our fight for respect,
repair, and restitution.

Our recent ancestors confronted racism in the United States in its most overt form: A white mob—empowered and joined by government authorities—chased Black Greenwood residents out of their homes, killing hundreds of their friends and family members along the way, and then burned the thriving Black enclave to the ground. The terror didn’t stop there. My father and I have had our lives turned upside down by structural racism that has continued after the atrocity.

In September 2016, my twin brother, Terence Crutcher, was shot and killed by Tulsa police as he stood unarmed next to his vehicle in the middle of the street. He was forty years old, and his killer, Betty Shelby, was allowed to remain in law enforcement. The U.S. Department of Justice investigated the killing but never filed charges, reflecting the federal government’s systemic failure to hold killer cops accountable.

That’s why President Biden coming to Tulsa and meeting with my father and me, on Black Wall Street’s sacred ground, meant so much. It let him see, firsthand, how we have been fighting for justice—for massacre survivors and their descendants, for my brother, and for all of the others who have been victims of systemic racism in this city.

No person or entity responsible for the massacre, including the city of Tulsa, has paid a cent for the lives lost and the community destroyed. Even insurance companies and banks turned their backs on Black Greenwood residents and have ignored their obligations to this day. But President Biden came to Tulsa, and he listened.

As someone who grew up on Greenwood’s blood-stained soil, I knew what I had to do. There was no way that I could leave the meeting without using the word “reparations.” The three living massacre survivors—all centenarians—had recently found the courage to demand it, and I had to do so, too.

I told the President that Black Tulsans need help in our fight for respect, repair, and restitution.

Following our meeting, President Biden delivered a speech about the massacre. In a room full of the remaining survivors, descendants, and powerful civil rights figures—including the Reverend Jesse Jackson, the Reverend Al Sharpton, Congressmember Sheila Jackson Lee, the Reverend William Barber, and members of the Congressional Black Caucus—he acknowledged what happened. He called out white supremacy. He talked about how you can’t bury this truth.

But there is one thing the President didn’t say: the word “reparations.” Doing so could have helped to change the prospects and material conditions for Black people in Greenwood and across the United States.

Reparations are not about taking away from anybody; it’s about giving Black people a chance to recover what’s been lost, and giving the United States a chance to live up to its promise of creating an equitable society for all.

President Biden has said he supports a study of reparations. This summer, the House of Representatives is considering a bill that would do more to address our plight in Tulsa and systemic racism across the country than any other piece of federal legislation on the docket. H.R. 40 would establish a commission to investigate the legacy of slavery and its ongoing harms as well as come up with proposals to Congress for reparations.

I was pleased to see the Congressional Black Caucus come to Tulsa in full force to support massacre descendants and survivors and push for the passage of this bill. I hope that House leadership will vote on H.R. 40 this session, and that President Biden will make his support clear.

If we are ever to have racial justice in this country, the U.S. government cannot treat the national crisis of systemic racism as a local problem. My sole motivation in meeting with President Biden was to make sure that the descendants of the Tulsa Race Massacre, the victims of racially biased policing, and everyone else who has suffered under structural racism get the repair and respect that they deserve.

President Biden began the important work of acknowledging Tulsa’s dark history, but the darkness will continue until there is concrete action at the federal level.

I remain in Tulsa grappling with the unresolved trauma left behind by the massacre. I shouldn’t have to be fighting for the freedom to walk outside safely, or for access to hospitals and affordable food.

But here my father and I will remain, still fighting for Terence, for Rebecca Brown Crutcher, for the United States, and for reparations.

Tiffany Crutcher is founder of the Terence Crutcher Foundation and a descendant of the Tulsa Race Massacre.
Source: The Progressive