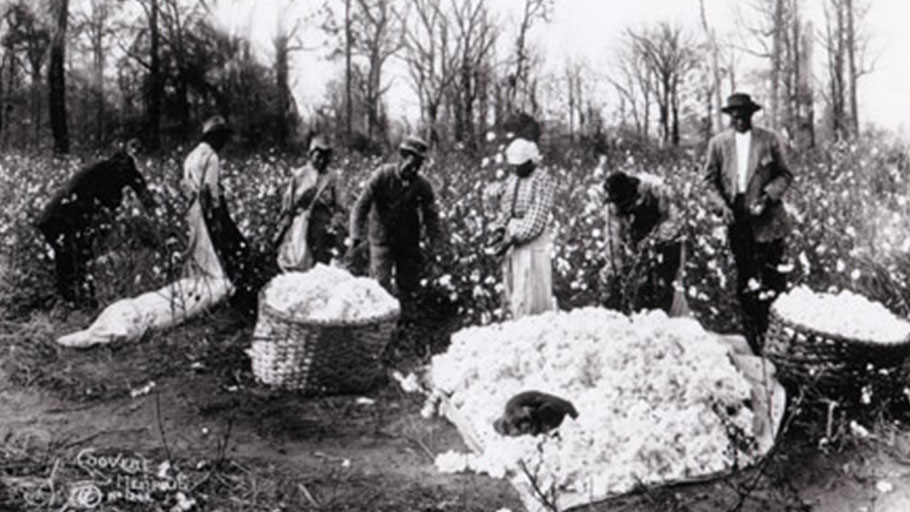 Cotton Harvest with dog lying in pile of cotton. Six pickers face toward the camera. On the far left is the presumed plantation owner holding still for Coovert’s exposure. Photo by Coovert, Memphis/Shelby County Library collection.

A Response to Walter Johnson

Black humanity is unexceptional, Walter Johnson exhorts. Once we have taken up the debate of humanization versus dehumanization under slavery, we have already ceded critical ground. Like Johnson, midcentury Black Power activists understood that it was necessary to redirect such questions toward the matter of how the legacy of racial slavery continues to shape citizenship, democratic participation, and human rights, not just for black Americans but for people of color around the globe. Johnson’s essay offers profitable avenues for reappraising how Black Power is the conceptual bridge between Reconstruction-era black struggles for self-determination and Black Lives Matter’s present-day fight to end martial and economic violence against people of color.

One of the most critical contributions of the Black Power movement was its searing critique of American racial capitalism. The movement’s roots in multiple strands—black nationalist, black feminist, black Marxist—of the black radical tradition formed the basis of its understanding of political revolution, community organizing, and the links between local, national, and global human rights struggles. Inspired in part by Nation of Islam theology—which holds the foundational belief that people of color are the most fully human of all—Malcolm X, Black Power’s political and ideological avatar, predicated his political ideology on the conviction that slavery’s legacy is central in shaping contemporary racial oppression.

Stokely Carmichael, the charismatic Student Nonviolent Coordinating Committee (sncc) chairman who emerged as the de facto leader of Black Power, spent years living and organizing among black sharecroppers in the Mississippi Delta and Alabama, from which he gained firsthand knowledge of how the legacies of slavery continued well into the twentieth century. Carmichael responded by preaching a vision of radical self-love, one that defiantly promoted black beauty, insisted on the value of African and African American history, and traced America’s imperial mission back to racial slavery. Indeed, for Carmichael black sharecroppers in Mississippi—for example, the Mississippi Freedom Democratic Party organizer Fannie Lou Hamer—offered America its most humane face and best hope for unshackling itself from its shameful past. And like Malcolm, Carmichael presupposed black humanity, which contoured his political activism and intellectual worldview.

If the respectability politics infusing aspects of civil rights activism relied on African Americans performing humanity in a never-ending audition before a skeptical white audience, Black Power activists flipped this dynamic on its head. Recognizing racial capitalism as the purveyor of evils that transcended the U.S. nation-state, Carmichael traveled through the Caribbean, Africa, and Europe exposing long-buried but now self-evident links between American incursions in Vietnam, institutional racism at home, and global practice of white supremacy, which hold the uncanny ability to shape political, cultural, and economic systems while overdetermining the parameters of their opposition.

Likewise contemptuous of respectability politics and the endless auditioning of one’s humanity, the Black Panthers sought to alter the entire landscape of black political engagement by delegitimizing the U.S. nation-state, which they characterized as bankrupt due to racial slavery, institutional racism, and racial capitalism. As revolutionary nationalists who linked political self-determination with anti-colonial thought; maverick socialists who talked of bringing Third World revolution to urban centers; and unconventional Marxists who expressed open admiration for Mao Zedong and Ho Chi Minh, the Black Panthers openly defied bourgeois liberal parameters of political engagement. The group fashioned itself as the vanguard of a political revolution capable of defending black lives from state-sanctioned violence, murder, and brutality. The Panthers called for an end to police brutality, the teaching of black history in schools, the end to capitalist exploitation that they linked to racial discrimination, and the release of African Americans from all local, state, and federal jails. But they were also grassroots activists who modeled radical self-love within communities, providing free school breakfasts, health clinics, legal aid, sickle-cell anemia testing, and busing to prisons to aid impoverished, racially segregated, and economically devastated black communities.

Johnson places reparations for slavery at the heart of his pursuit of racial justice. The Panthers did as well; it was in fact one of the group’s deepest philosophical commitments. As keen students of history, they understood also that they were far from the first to demand this. As historian Mary Frances Berry illustrates in her biography of Callie House, the nineteenth-century leader of the National Ex-Slave Mutual Relief, Bounty, and Pension Association, the movement for reparations dates to the immediate aftermath of slavery. It was in fact a cause first championed by the formerly enslaved. House, whose organization represented about three hundred thousand freed slaves, fought an unsuccessful campaign to pass federal legislation that would have granted federal pensions to former slaves.

Calls for reparations have taken many different forms. Black Power activist James Foreman’s “Black Manifesto” (1969) demanded that white churches and synagogues fund the creation of a half-billion-dollar trust that would be used for black infrastructure, including universities, publishing houses, legal aid, and farmland. The late-sixties Republic of New Afrika demanded the creation of a sovereign black country, carved out of the southern United States, as well as seed money of several billion dollars to sustain the new nation until it could be self-supporting. These utopian visions all share the goal of a viable black future, freed of the systemic disadvantages black Americans face, and which have their origins in slavery and its racial regime. They and their visionaries have been universally dismissed, ignored, mocked, reviled, and demonized by the mainstream, including often by black civil rights leaders. Johnson’s embrace of the Movement for Black Lives’ renewed call for reparations—like my own scholarship, which I have characterized as Black Power Studies—invites a reevaluation of how these historical visions of racial justice might offer clues to how the negative cycles of racial capitalism can be broken.

Often forgotten is that black studies—both in universities and in elementary, middle, and high schools—arose from midcentury radical efforts to overcome America’s purposeful amnesia about black history and bring attention to the struggles of global people of color. Such efforts were enmeshed with calls for reparations: Foreman wanted black universities to be funded with reparations, and Black Power activists felt that quality education—formal or grassroots—was necessary if black people were to comprehend the full depth of their oppression and collectively demand recompense. Historian Russell Rickford’s indispensable We Are An African People (2016) offers perhaps the definitive history of how black liberation movements used education to disrupt white supremacist institutions and epistemologies, and in the process attempted to practically implement Black Power’s call for political self-determination through community control of institutions (and their finances) in American society.

Black Power, of course, both criticized liberal democratic capitalism and became partially commodified by it. And merely exposing racial capitalism’s dark underbelly did not lead to its defeat. Arguably it is more entrenched now than ever. Nonetheless, in an era before Black Lives Matter offered an invigorating and timely assertion of black humanity and defense of black bodies, Black Power forged new ground by reimagining the very terms of debate between black people and the U.S. nation-state. Activists and organizers did so through bruising protests, massive urban revolts, organized demonstrations, school takeovers, boycotts, and civil disobedience. For example, historian Yohuru Williams’s Black Politics/White Power (2000) contextualizes the history of civil rights and Black Power in New Haven, Connecticut, by tracing the contours of how local civil rights activists paved the way for the Black Panthers to found one of the group’s most important chapters, one that innovated the free breakfast programs and inspired protests at Yale University in 1970.

The Movement for Black Lives now continues this tradition, but updates it with a defiant recognition of black humanity in all of its messy, complex, and contradictory fullness. Youth, the elderly, the mentally and emotionally challenged, trans and queer, poor, the hiv-positive, and non-able-bodied are central to the radical democratic vision articulated in the Movement for Black Lives’ “A Vision for Black Lives.” In many ways, this agenda builds on earlier documents produced by the Black Liberation tradition: slave narratives, proceeds of Reconstruction-era Black Conventions, the anti-lynching journalism of Ida B. Wells, the Pan-African Congresses and their global black philosophies of Négritude and decolonization, and the Black Convention Movement of the 1960s and ’70s, which featured Black Power conferences, the Congress of African Peoples Meeting, the Gary Convention, the African Liberation Support Committee, and the Sixth Pan-African Congress.

The legacy of Black Power informs Black Lives Matter in important and substantive ways, yet the contemporary movement has successfully overcome some of the former movement’s conceptual shortcomings, especially with regard to its insistence that intersectionality is a strength of any social justice movement, rather than something to be denied, ignored, or silenced.

With its emphasis on the valor that ordinary people of color exhibit everyday just to survive in America, Black Lives Matter echoes the vision of no one more than it does that of Ella Baker. Baker, a tireless and instrumental crusader for civil rights who eschewed the spotlight because “strong people don’t need strong leaders,” found cause for hope in the fortitude and dreams of black citizens. Inspired by this, she shepherded the founding of sncc, the most important grassroots organization of the era, one that catalyzed the 1960s and influenced the New Left, Black Power, the Black Panthers, and virtually every other radical organization since.

Baker eschewed hierarchies, personality cults, and iconography to get on with the work of liberation, a freedom she identified as offering ordinary people the chance to fashion their own dreams of empowerment, transformation, and dignity. She understood, better than perhaps any other black radical activist of the twentieth century, that humanity formed the beating heart of black liberation struggles, whether her fellow citizens recognized this or not.