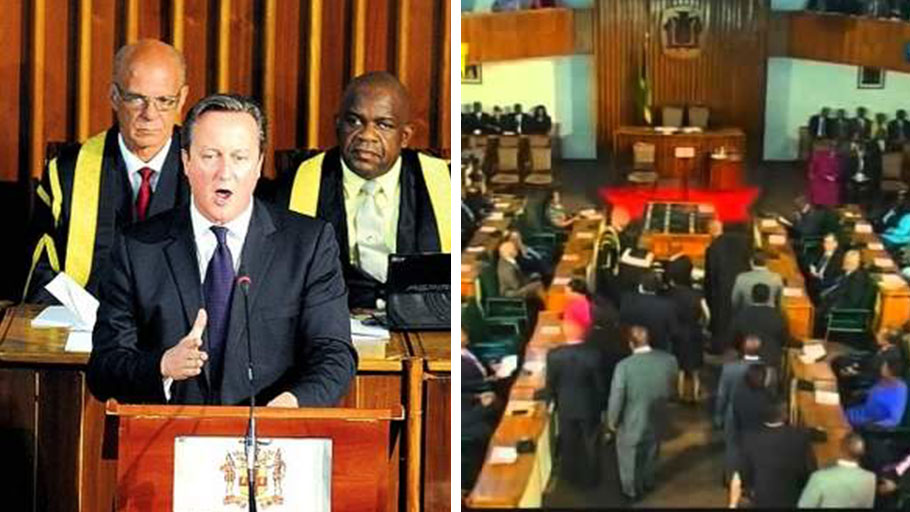 The Cameron Deception: The UK Refuses To Apologize For Slavery While Paying Off Debts Up To 2015

You Are Here: Home » Blog » Reparations » The Cameron Deception: The UK Refuses To Apologize For Slavery While Paying Off Debts Up To 2015

On September 30, 2015 when Prime Minister David Cameron of Great Britain & Northern Ireland addressed the Jamaican Parliament and told the people of the island and region that slavery was a long time ago and that it was time black people ‘get over it’, he was not speaking the truth. He was speaking the greatest falsehood of the modern era in respect of the crime of British slavery. He must have known the truth: the truth now reveals that his government in 2015 was still paying off the slavery abolition loan of 1834.

Historians have now got to the bottom of the financial crime. They have revealed the shocking news that Britain paid the last instalments of the 1834 slavery abolition loan on 15th February, 2015.

This revelation speaks to the persistent dishonesty of British governments and Prime Ministers about the system of African enslavement as a distant event, a remote history with no connection and relevance to the present. This persistent lie was exposed by the evidence from Her Majesty’s Treasury which shows that the slavery loan was several times refinanced and finally paid off just three years ago.

Vice-Chancellor of The University of the West Indies (‘The UWI’), Professor Sir Hilary Beckles, who is also an economic historian, revealed that research into the archives of the Bank of England, HM Treasury, and the Rothschild Merchant Bank shows that successive recent British Prime Ministers, especially Tony Blair and David Cameron, have sought to deceive the Caribbean people on the matter.

They have refused to enter into reparation conversations with the Caribbean and have covered up the truth in order to make the argument that slavery was in the distant past, hence not subject to reparation claims. The truth is that British governments refinanced the slave loan for over 150 years in order to financially benefit from slavery right under our very noses.

This is a shameful and disgraceful deception of the Caribbean people, the African world, and the UK’s own citizens.

It is unimaginable that until 2015 ordinary people in Britain, including Black People, were still repaying the slave abolition loan which equalled over £ 20 billion in today’s money.

The most disgusting part of it is that the 300,000 working West Indians in England have been taxed to repay the slavery loan which enriched the enslavers owners and their descendants right into the present day.

This is a horrible reality to accept and the British government must apologise for the lies and the deception and sit down with the Caribbean States to discuss the reparation agenda with immediate effect.

Every West Indian taxpayer in Britain who are descendants of the enslaved, must demand accountability and repayment. That the government of Britain, and the rich who held the slavery bonds, cashed in on its refinancing from the 1830’s to today is an international immorality of the highest order.

Only reparation can cleanse this crime from the face of our societies. Both the Caribbean and the British people must demand justice. We stand together against this deceptive politics. Only reparation can repair this horrible crime in our communities. 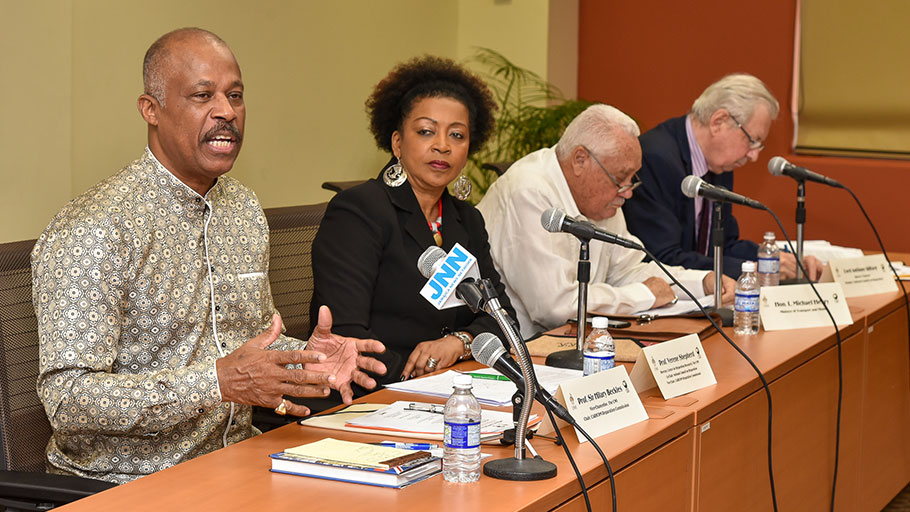 (From L to R) Sir Hilary Beckles, chair of the CARICOM Reparations Commission (CRC) and Vice Chancellor of the University of the West Indies (UWI) speaking at the press conference in Jamaica on Feb. 21. Also speaking at the press conference was Prof. Verene Shepherd, director of the Center for Reparation Research at the UWI, Mr. Michael Henry, Jamaica’s Minister of Transportation and Works and Lord Anthony Gifford, member of the Jamaica Reparations Committee.

Chairman of the CARICOM Reparations Commission and Vice chancellor of University of the West Indies (UWI), Sir Hilary Beckles has charged the British government with being both dishonest and immoral in choosing not to pay reparations to Caribbean people.

Sir Hilary gave a scathing tongue-lashing during a press conference on Wednesday at UWI Mona convened by the Center for Reparations Research (CRR). The conference was held to discuss a recent claim made by the British Treasury which stated up to 2015, the loan from the British government used to compensate former slave owners was still being paid by British citizens.

The information came via a tweet from Her Majesty Treasury page on February 9, saying “… Millions of you helped end the slave trade through your taxes.” The post also explained that in 1833, after the Abolition Act was passed, Britain used £20 million to buy the freedom of those enslaved in the British West Indies. It went onto say the amount money borrowed to repay the plantocracy was so large, the debt was not paid off until 2015 which means that “British citizens helped pay the end of the slave trade”.

Referencing a speech made by former British Prime Minister, Dave Cameron, in the Jamaican House of Parliament back in 2015, Sir Hilary said Cameron’s advice for the Caribbean to cease the call for reparations and “move on” from slavery, shows “public dishonesty” and “immorality” on the part of the British government.

“For me it is the greatest act of political immortality, to be told consistently and persistently to put this [slavery] in the past and yet her Majesty’s treasury has released the relevant information to suggest that it is just two years ago that this bond was being repaid.”

He also said when Cameron made the address he must have been well aware the debt was still being paid by British citizens.

“This transfer of public money to the private holders of the slave bond makes it a present day activity. It also implies that the 300,000 West Indian people who have been living in Britain, their taxes were being used to pay back the slavery loan, which suggests that you are speaking of a double payment.”

Sir Hilary said the fact that there is proof of “further major wealth extraction” from the descendants of enslaved people up to 2015 underscores the legal obligation of Britain “to put the money back into the Caribbean.