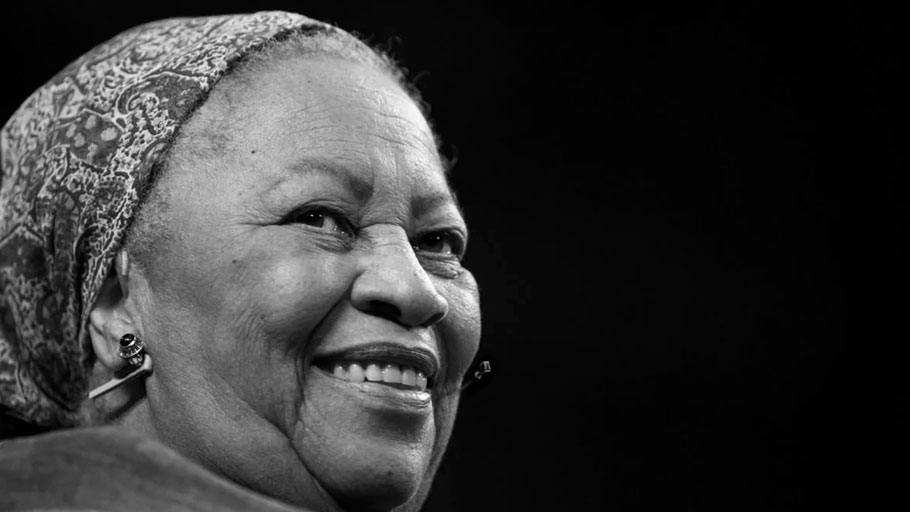 You Are Here: Home » Blog » Editors' Choice » Toni Morrison’s Black Art Spoke in a Nation That Would Silence Us

“To create art amid sorrow or oppression is to insist on excavating meaning from the dull senselessness of pain. It is to be alive and speaking back. Art dives headfirst into the uncharted perils and delights of the human condition. For people whose humanity is often denied, taking that plunge with an audience is inherently rebellious.” —Hannah Giorgis

My mother called to tell me Toni Morrison crossed over to the other side, and my second thought was, she is bound to be a most powerful ancestor. My first thought was a kind of meditation. Toni Morrison was spirit long before she disengaged from her flesh. Long before she flew over to the other side, Toni Morrison communed with the energies that dwell in that other realm. The veil between this temporal realm and that ancestral realm billows and waves. For some of us, the veil thins when we dance, hum, when we libate a Red Stripe or Jack Iron. For Toni Morrison, the veil did not exist.

I saw the Toni Morrison documentary The Pieces I Am with my dear friend Bridgett earlier this summer. When we exited the theatre, I leaned into her and said, “You know that part during the discussion after the film, when the sister said they could hear laughter coming from Toni’s cellar whenever they talked about Toni Cade Bambara?” In response to my question, my friend said “yes, of course” because, you know, who could forget that the filmmaker said she heard laughter coming from the cellar whenever they talked about Toni Cade Bambara, a brilliant writer who passed too soon back in 1995, a good 20 years before the film was made. I leaned in closer to Bridgett and whispered, “I am giving you permission to come and laugh when I remember you one day, and if I go first, expect me to visit and laugh out loud, loud enough for you to hear.”

The point of this is to tell you, dear reader, that for Toni Morrison, no space existed between this world and the next. A Black woman with no liminality, walking this world, is power. Or, perhaps Toni Morrison was the liminal realm, the space between. Her body was the threshold. Toni Morrison herself was The Passage.

Toni Morrison was practical. She was matter of fact and smart and not given for a lot of spirit this and umbras in the house that. Toni Morrison did not have time for foolishness. A woman rose from the waters, fully clothed and wearing a hat, and when she looked directly at her, Toni Morrison told her story. A best girlfriend visited from the other side and added some laughter to her house. These encounters did not detach Toni Morrison from the very real world of paying her bills and raising her two sons and catching a taxi to zip around the city.

When I met Toni Morrison in the flesh, she was beautiful and amazing but clearly just wanted to chill and enjoy her evening. My circle of sister writers and I nearly genuflected as we told her we love her and are grateful to her, but we did not push past a quick picture and a thank you ma’am and goodnight. Toni Morrison was not playing with us, ya’ll.

Toni Morrison most definitely did not come to the earth to play.

Toni Morrison was political. Black writer, Black mother, Black woman, Black girl grown, she never minimized her Blackness. She exulted in it. When asked a vapid question about why she didn’t write more white characters into her narratives, Toni Morrison said, “You can’t understand how powerfully racist that question is, can you?”

And that was that, chile.

Black art is inherently political, because it speaks in a nation that would silence us, moves us in a society that restricts our Black bodies, liberates us from the caged confines of this country. America’s psychological grip on our sense of self is ruthless. Black art helps us see our authentic selves, and know our personal power.

Black art is inherently political, because it speaks in a nation that would silence us, moves us in a society that restricts our Black bodies, liberates us from the caged confines of this country.

Toni Morrison encouraged Angela Davis to tell her story, and talking about Toni Morrison on camera for The Pieces I Ammade Sonia Sanchez weep.

I remember thumbing through The Black Book as a child and feeling so much pride. Toni Morrison, I know now, gave me that book, because she edited it. She made it. She put our world together on its pages. She gave me They Came Before Columbus, too. Gayl Jones, June Jordan, Henry Dumas, Wesley Brown….

Toni Morrison came up a Boomer, came of age during The Movement, and came to this world through her art in a powerfully African way.

The concept of art for the sake of art is distinctly European. Generally, in African ontology, art is utilitarian. Art does something. Art works. Here in the West, we hang African masks on walls, encase them in archival-quality glass, and post little descriptions that explain their origins and value. On the continent, that same mask rests in a closet, clustered among other masks until the wearer pulls it out and puts it on and then the mask moves, animated in the open air, and describes to a community their origins, their value. On the continent the mask behaves (or misbehaves).

Toni Morrison’s stunning prose reminds us, if nothing else, of the power of beauty in art — but Toni Morrison’s work was African and so also gave us everything else: context, history, fact, emotion…. This list is insufficient.

Context. Toni Morrison’s work gave us vile characters (like Cholly, in The Bluest Eye) so round and well-developed it is impossible not to understand them and therefore, despite their awfulness, feel for them a certain compassion, even love — her most powerful word choice.

History. Toni Morrison’s work gave us flesh, characters (like Beloved, in Beloved) who actually lived and died and so haunt us with the memory of their singular experience — but also moan through a chorus of testimony, 400 years of dispossession expressed in one unforgettable act of defiance, one gesture, one slice into a daughter’s heart to secure Freedom, to be loved.

Fact. It is impossible to dispute the reality of Flying Africans (like Milkman, in Song of Solomon) after reading Toni Morrison’s work. Do not foolishly seek to make sense of Black flight through metaphor, parable, or a tall tale. My people can fly. That’s truth. That’s facts. And that’s that.

This list is only a beginning, in seeking to describe the particularly African art Toni Morrison produced.

Toni Morrison. She is gorgeous still. Forever beautiful. Her silver locks, her crown. Her strong frame, her shield. Her pen, a spear. Queen Warrior Writer. Blessings as you transition. Blessings to you always. Bless.

Eisa Nefertari Ulen is author of the novel Crystelle Mourning, a novel described by The Washington Post as “a call for healing in the African-American community from generations of hurt and neglect.” She is the recipient of a Frederick Douglass Creative Arts Center Fellowship for Young African American Fiction Writers, a Provincetown Fine Arts Work Center Fellowship and a National Association of Black Journalists Award. Her essays exploring African American culture have been widely anthologized, and her essay, “Black Parenting Matters: Raising Children in a World of Police Terror” was published in the Truthout anthology, Who Do You Serve, Who Do Your Protect? Eisa has also contributed to Essence, The Washington Post, Ms. Magazine, Health, Ebony, HuffPost, The Root, TheDefendersOnline.com, The Grio and CreativeNonfiction.org. She has taught at Hunter College and The Pratt Institute and is a founding member of RingShout: A Place for Black Literature. Follow her on Twitter: @EisaUlen.