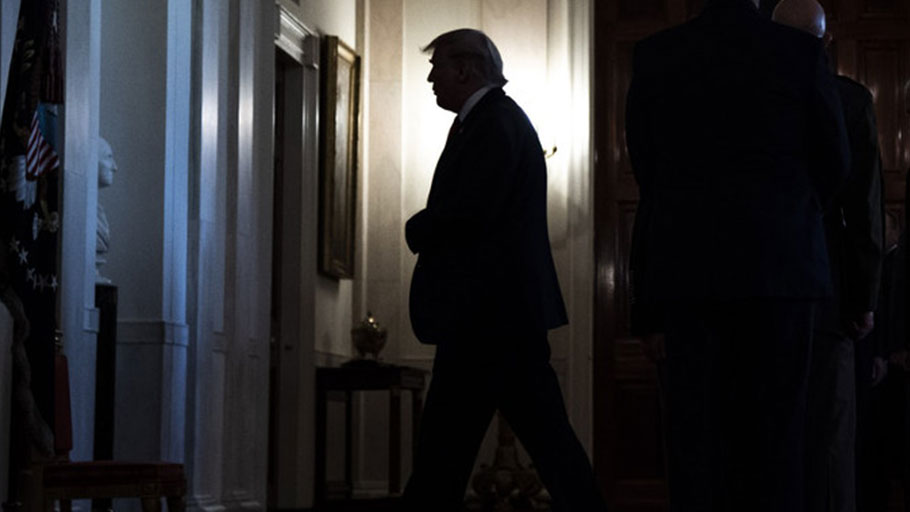 The report excuses America’s founders for owning slaves and defends the racist Three-Fifths Compromise as necessary to form a “durable union.”

On Martin Luther King Jr. Day, only two days before President Donald Trump leaves office, the Trump administration released a report from its “1776 Commission” that excuses slavery, justifies the racist Three-fifths Compromise and rails against socialism and “identity politics.”

The “1776 Commission” — formed by Trump in September in direct response to The New York Times’ 1619 Project on America’s deep roots in slavery and racial injustice — released a report Monday that was meant to provide a “definitive chronicle of the American founding.”

The 45-page report reads in places like a right-wing manifesto: It makes excuses for slavery and the Three-fifths Compromise that declared slaves counted as less than full humans. It decries socialism and “identity politics,” celebrates the right to bear arms and calls the anti-abortion movement one of the nation’s “great reforms.”

The report notably defends the country’s Founding Fathers, who owned slaves, arguing that slavery was not “a uniquely American evil” and urging that “the institution be seen in a much broader perspective.”

The report goes on to justify the Three-fifths Compromise — in which white lawmakers from Northern and Southern states in 1787 agreed to count Black people as three-fifths of a person for congressional representation — saying that this was “just that: compromises,” and that, “as a question of practical politics, no durable union could have been formed without a compromise among the states on the issue of slavery.”

Historian and slavery scholar Daina Ramey Berry said the report “advocates teaching a narrow ‘patriotic’ history” of America and aims to “muzzle those who seek to teach a full and accurate history of America, including journalists of The New York Times’ 1619 Project.”

“From a historian’s vantage point, the report cannot be taken as a solid piece of historical work: It seeks to justify slavery and its damaging aftermath in order to indoctrinate yet another generation of American students,” Ramey Berry, chair of the history department at the University of Texas at Austin, told HuffPost.

“The last four years, underscored by the last few weeks, have demonstrated how fragile our embrace of truth can be and the consequences of purposeful disinformation,” she added.

The Trump commission’s report says that the current political divisions among Americans “call to mind” those “between the Confederate and Union forces in the Civil War” — a war that was fought over slavery. It goes on to tout the right to bear arms, saying “an armed people is a people capable of defending their liberty no less than their lives and is the last, desperate check against the worst tyranny.”

Earlier this month, Trump incited an armed mob of his supporters to storm the U.S. Capitol, where lawmakers were voting to certify the results of the presidential election, which Trump lost and yet repeatedly lied about it being fraudulent. A week later, the Democratic-led House of Representatives impeached Trump for inciting an insurrection — making him the only president to ever be impeached twice.

Trump’s 1776 Commission report, which includes several photos of Martin Luther King Jr., criticizes affirmative action, calling it “preferential treatment,” and says today’s “identity politics” are “the opposite of King’s hope that his children would ‘live in a nation where they will not be judged by the color of their skin.’”

Just days earlier, Bernice King, the daughter of Martin Luther King Jr., shared a clip of the civil rights icon on Twitter in which King skewers America for freeing Black slaves in 1863, then giving them no land or resources to get started on, all while giving away land to white settlers.

The Trump commission’s report also rails against socialism as leading people down a “dangerous path” of wealth redistribution and cites “anti-Communism” and “the Pro-Life Movement” — or anti-abortion movement — as some of the “great reforms” of the country’s history.

It concludes that universities are “hotbeds of anti-Americanism, libel and censorship,” and warns against any teaching that “shames Americans by highlighting only the sins of their ancestors and teaches claims of systemic racism.” It also recommends K-12 schools “reject any curriculum” that demeans “America’s heritage.”

The administration of Joe Biden and Kamala Harris, who take office on Wednesday — when Harris becomes the first Black, first Asian American and first female vice president — will likely do nothing with the report. The incoming administration has repeatedly committed to “root out systemic racism.”