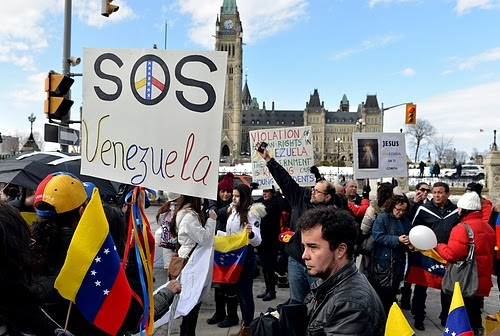 The political and economic crisis in Venezuela is showing little signs of easing up. Similarly, the propagandistic reporting of this crisis is showing little signs of easing up. How did Venezuela find itself in this dire situation? The U.S. media maintains that this crisis is a result to Hugo Chavez’s Bolivarian Revolution and the communist redistribution policies, which are implemented and maintained by President Nicolas Maduro.

It is unanimous, between the left and right, that Venezuela’s economy is much too dependent on oil and must be diversified. However, the conclusion of how this economic situation occurred is much more contested. For instance; why doesn’t Venezuela have a vibrant agricultural sector? Venezuela imports most of its food and the industry has been on decline since the 1950s. The importation of food would be a fact with or without the Bolivarian Revolution. This can be concluded by simply following the statistical trends. Venezuela’s traditional home grown foods include corn, rise, coffee, sugarcane, vegetables, beef, pork and fish all of which are the perfect ingredients for a nation to have a thriving agricultural industry.

However, Venezuela cannot compete in the international market, or in its own market with respect to agriculture. This is due to the United States’ highly protectionist and highly subsidized agricultural sector, which is solidified by the so called trade deals passed around the globe. While the world must submit to neo-liberal and laissez faire policies, the U.S relies on subsidized market interference. Since Venezuela cannot compete agriculturally, Venezuela imports food and pays for it with its oil. Unfortunately, the government has staked their entire future on oil revenues and the economy is completely subject to how well that commodity does on the market.

The United States has doubled its domestic production of oil in the last decade. Since Russia is in a similar situation as Venezuela, with respect to an oil economy, they are pumping out huge amounts of oil to keep up with the price of their economy. It is also known that Saudi Arabia is pumping its domestic oil at capacity. Supply is up and demand is low, due to alternative energy industries and the popularity of environment friendly cars. Furthermore, low demand has led to a decline in investment.

These contributing factors have led to low oil prices and for low revenues for Venezuela. Recently, Iran, Venezuela and Ecuador have all urged the OPEC cartel to cut worldwide oil production in order to bring prices back up. OPEC refused and this decision was mostly supported by Saudi Arabia and its Persian Gulf allies. It just so happens that the dictators of the Middle East are proxies of the U.S. and Iran, Venezuela and Ecuador are targets of the U.S. economic policies.

Suppose institutions like Wall Street, the Defense Department, the State Department, the Department of Agriculture and Energy were all just watching this turmoil from its periphery. Given the United States involvement in Latin America would not this situation seem remarkable? Consider the past two decades of Venezuelan and United States relations. The U.S. has been exposed for financing and fomenting, through it intelligence apparatus, the massive protests in Venezuela. What would the U.S. government do if Venezuela was proved to be funding and fomenting the Black Lives Matter movement in the Ferguson riots?

The U.S. staged a coup d’etat against Hugo Chavez in Venezuela, which luckily only lasted a couple of days. Suppose Maduro was working with the Republicans and the U.S. Military in order to oust President Obama; how would we react? Currently, the U.S. and its allies at the Organization of American States are trying to kick Venezuela out of the hemisphere by revoking its membership in the OAS. Suppose Venezuela was working with its allies to kick the U.S. out of the United Nations or the OAS; how would the U.S. government react?

In 2005 Venezuela offered tons of food, billions of dollars in oil, water, medical experts, medical aid and equipment to the victims of Hurricane Katrina.  How is the U.S. returning the favor to the Venezuelan people as medical shortages are costing lives, there is no food to buy in the grocery stores and the government is collapsing?

The biggest privately owned food supplier, Empresas Polar SA, is urging for foreign aid. These calls are being ignored even as the managers of Empresas Polar SA are fellow capitalists and allies of the United States. When civil society collapsed in New Orleans and chaos reached Louisiana, Venezuela was trying to help the situation on the gulf by offering aid for the victims. This aid was very much needed as the wealth of the U.S. was dedicated to destroying Iraq and murdering Iraqi citizens. Now that Venezuela needs help, they are offered nothing by the United States.

Maduro is playing with fire by putting his military on high alert and warning of a possible foreign invasion. The United States loves to invade countries and murder people. Maduro should not be provoking the murderous military leaders of the United States. Venezuela desperately needs to diversify its economy by bringing back agriculture, building up their infrastructure and returning to manufacturing. Perhaps Maduro should step down as president and perhaps he should be voted out.

However, choosing Henrique Capriles as president, a man who urges the Venezuelan army to dispose of Maduro in an illegal coup and is a United States intelligence figurine, would result in a far worse situation for Venezuela. Venezuela will not fix its economy by simply abandoning the Bolivarian social programs, just like the opposition is calling for. The U.S. did not come out of the Great Depression by eliminating social programs and cutting spending. On the contrary, the United States got out of the Great Depression with extremely high government spending, massive social programs and investments.

Venezuela is going through a rough period and needs the help of the international community and the solidarity of international citizens. Ultimately, Venezuela is going to have to make some difficult decisions but it is not the U.S. responsibility to subvert the economy and the people of Venezuela. The United States should be providing aid and reparations. If the U.S. is using economic warfare to punish Russia, Ecuador and Venezuela it would not be the first time.

However, if it is true the United States government should be exposed internationally and everywhere around the globe for the murderous, tyrannical, spying, meddling, torturing, militarist country that it is.