What Shirley Chisholm can teach 2020 candidates as they exit

You Are Here: Home » Blog » Editors' Choice » What Shirley Chisholm can teach 2020 candidates as they exit 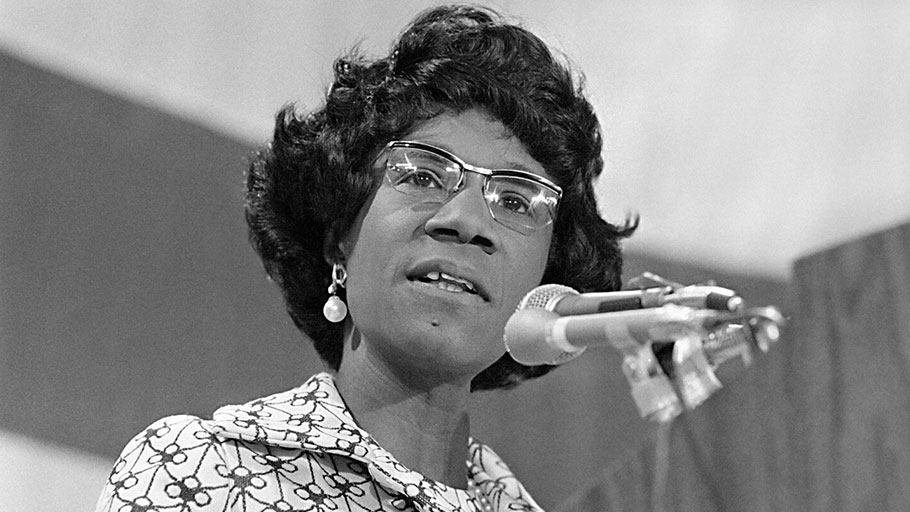 On Super Tuesday, about a third of Democratic voters will be casting votes for the candidate of their choice. The mainstream media and the candidates themselves have talked a lot about “electability,” assuming that voters should only, and would only, vote for a candidate they think can win. But primaries are about more than selecting a nominee for the general election. In fact, in 1972, Shirley Chisholm ran for president for different reasons: to show that she could, and to use her delegate power as a bargaining chip with the national Democratic Party.

Decades before Barack Obama built a multiracial coalition and Hillary Clinton became the first woman to win a major-party presidential nomination, Shirley Chisholm launched a historic campaign. Chisholm, the first black congresswoman, became both the first black person and the first woman to make a serious bid for the nomination. She had an unshakable amount of confidence in herself and her convictions and took on party bosses, the mainstream media and entrenched interests in the Democratic Party to give voice to young, poor, female, black and brown voters. She pushed to unify these forgotten voters into an effective coalition at the Democratic National Convention, but in the end concerns about electability undermined her attempt. Her campaign shows just how difficult it was, and still is, to build and sustain an electoral coalition.

Chisholm was a congresswoman from Brooklyn, where her district contained much of Bedford-Stuyvesant, a poor black neighborhood. In 1972, Americans nationwide discovered what Chisholm’s constituents and House colleagues already knew: She was a powerhouse speaker with an inspiring democratic vision. Her barely 5-foot frame contained a plain-speaking voice that had been bringing college students to their feet along her lecture circuit since her election in 1968.

Chisholm’s politics were, in the coinage of legal scholar Kimberlé Crenshaw, intersectional. As a black feminist, Chisholm was accustomed to questioning power in all its forms, simultaneously. Chisholm had grown up the daughter of parents who had immigrated from Barbados: a father who was a strong union man and a seamstress mother. She spent her youth eavesdropping on her father’s union meetings and discussing New Deal policies with him. Embracing both anti-racism and anti-sexism, once elected to office, she also sought to end the Vietnam War and fought to deploy the powers of the federal government to end poverty.

The decision to run for president, she insisted, was made for her by the women and college students who cheered at her speeches. They then raised money, filed to place her name on the ballot in their states and rented campaign offices. She went along not because she thought she might actually win the nomination or the presidency. Rather, she wanted to show the power of new voices in the Democratic Party: women, African Americans, the poor and youth, and to challenge the authority of conservative Southern white Democrats at the Democratic National Convention. Becoming “a force to be reckoned with at the convention,” she also hoped to force the nominee to name a black vice president; a woman as secretary of health, education and welfare; and a Native American as secretary of the interior.

She faced ridicule from the political and media establishment — and even the black press. “Woman President? It’s No Joke, Bub” read one headline in the New York Amsterdam News. Walter Cronkite joked that “a new hat — rather, a bonnet” had just been thrown into the ring. New York Mayor John Lindsay tried to persuade her to withdraw from the Florida primary, explaining that she might hurt his chances there. The rumors of her insanity were enough for Nixon dirty trickster Donald Segretti to create a fake news release on Hubert Humphrey’s campaign stationery claiming that Chisholm had periodically been hospitalized in a Virginia asylum, in an attempt to sow discord between campaigns.

Her allies were willing to sacrifice support for her campaign in the name of selecting a candidate who they thought could defeat Nixon. Fellow New Yorker Bella Abzug withheld her endorsement, even though the two had co-sponsored a universal child-care bill that Nixon had recently vetoed as “a radical piece of social legislation.” Abzug and Chisholm had, with Gloria Steinem, co-founded the National Women’s Political Caucus. Yet Steinem, a friend of Sen. George McGovern of South Dakota, was backing him.

Among her male Capitol Hill colleagues who had co-founded the Congressional Black Caucus with her, only two were willing to declare their support. Most were irritated with her for circumventing a set of long deliberations that black leaders had been conducting about whether to run a candidate. When she announced, they had yet to make a decision. Chisholm had no interest in waiting for them to come around to calling on her. She saw no downside to a campaign: Why not run, when she could attract support from women, black, young and poor voters?

It was young people, newly enfranchised by the 26th Amendment that lowered the voting age to 18, and black women who supported her. Recognizing a candidate who finally spoke to their concerns, they spent the first months of 1972 working for tiny or no wages (the campaign would eventually raise only about $250,000). Lawyer Flo Kennedy founded the Feminist Party, whose first endorsee was Chisholm. The Black Panthers held a fundraiser for her in Huey Newton’s Oakland, Calif., penthouse. By the end of the primary season, she had 31 pledged delegates (out of about 1,500 needed to win) who were headed to the convention.

At the Democratic National Convention in Miami, Chisholm tried to pull all possible supporters together into a bloc to demonstrate this coalition’s power within the party. In an openly emotional plea to the Black Caucus meeting, she accused black political leaders of having sacrificed their integrity for false promises from other candidates. “Don’t sell your vote … our people are watching us,” she urged them.

She did the same at the Women’s Caucus meeting, where members hoped to influence the nominee to name a female vice-presidential running mate and adopt a pro-choice plank in the platform. Chisholm thought she was their best hope of gaining influence and tried to persuade the thousand-strong female delegation, the largest ever at a political convention. “You have to make the decision whether your commitment to women is going to go down the line for a woman candidate or whether women go for the male candidate like they always do.”

And yet Chisholm’s message of voting for her to exercise political leverage did not get through to the women cheering her speech. One women told a reporter that she would not vote for Chisholm and “that’s why I’m clapping so hard. I’m clapping out the guilt. But this is politics and she’s not going to win.”

Despite recent changes to the nomination process that allowed Chisholm to run in primary elections across the country, she never had a chance. Eventually, Chisholm garnered 151.95 delegates on the convention floor, coming in fourth behind McGovern, Sen. Henry “Scoop” Jackson of Washington and Alabama Gov. George Wallace. It was a first, but it was not enough to gain any leverage at all with McGovern. She made her way to the podium for McGovern’s acceptance speech, clasping hands with him in a show of unity. She hadn’t won any concessions, but she would close ranks behind the nominee in an attempt to beat Nixon in November.

Chisholm would recall the improbability of her attempt in a memoir of the campaign, “The Good Fight.” “Presidential Politics is a big-time, high-stakes game, and it is played by tough, sophisticated politicians with plenty of money and plenty of skill,” she explained. “My own participation in 1971 and 1972 was a unique, one-shot phenomenon, an effort by an amateur supported by a crowd of idealists.” And yet she made the attempt, impelled by the idea that simply running could “open the door ajar” for someone who wasn’t white and male.

Obama and Clinton walked through the door that Chisholm opened. So have Kamala D. Harris, Elizabeth Warren, Amy Klobuchar, Kirsten Gillibrand, Julián Castro, Andrew Yang and Cory Booker. She drew new voters into the Democratic coalition and new organizers into politics, including Reps. Barbara Lee and Maxine Waters, who serve today. Her campaign, and the coalition she imagined, suggests that there is value in voting for a candidate who won’t win. Far from pushing the party apart, it has the power to bring its diverse members together.

This article was originally published by the History Network News.

Anastasia Curwood is associate professor of history and Director of African American and Africana studies at the University of Kentucky. She is at work on a biography of Shirley Chisholm.

How the Coronavirus Is Exposing Inequality Among America’s Workers

How the Coronavirus Is Exposing Inequality Among America’s Workers
We Need Your Support — Donate, Share, Sign-Up Ways to Support