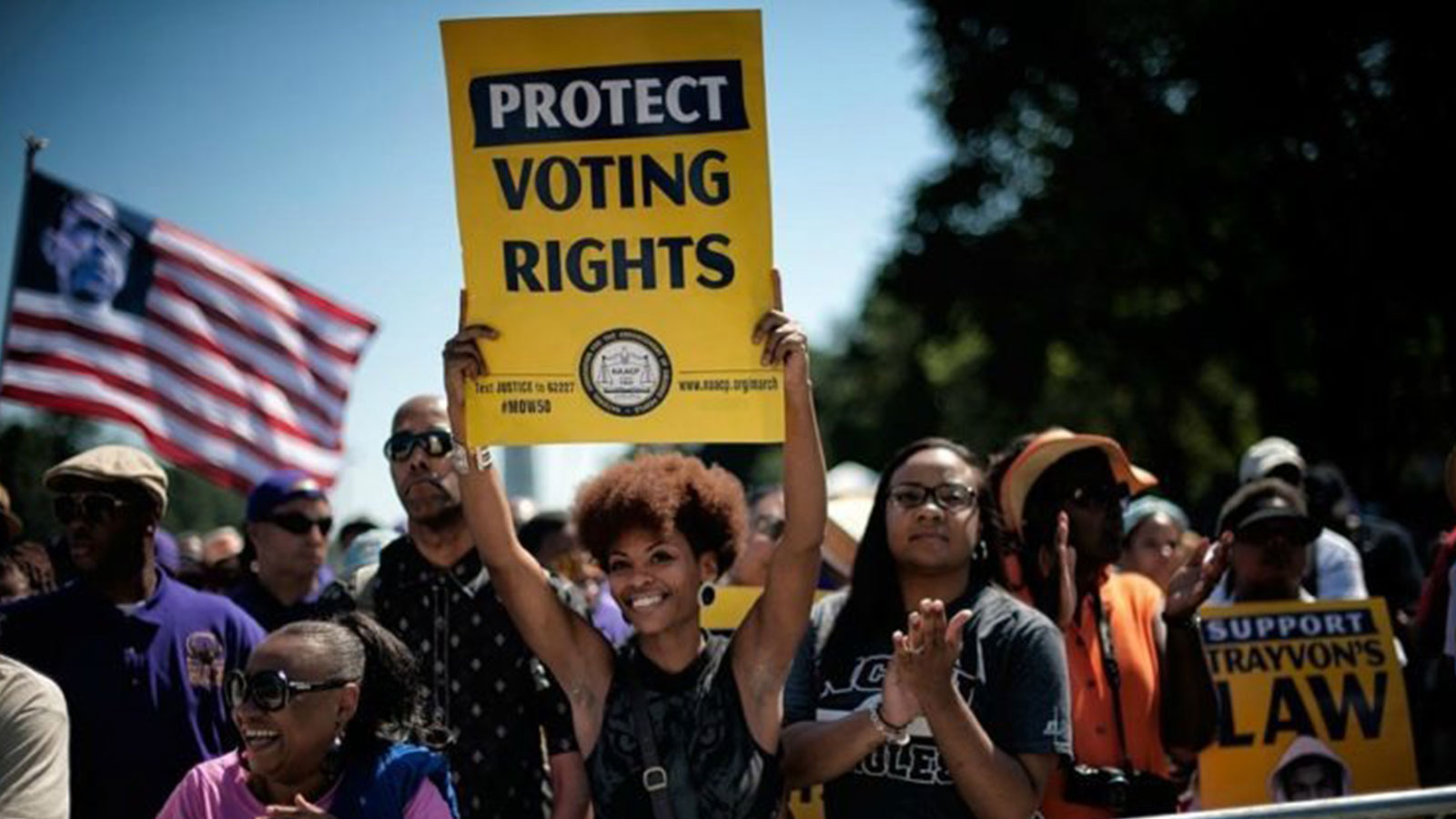 You Are Here: Home » Blog » Editors' Choice » Why the voting rights struggle is a tipping point for American democracy

“We need to do this in order to protect our rights, rights we already have, rights we shouldn’t have to still be fighting for.”

E.J. Jenkins vividly recalls the day his mom worked a voter registration drive at a grocery store in Gary, Indiana, and followed one recalcitrant young man to his car, coaxing and cajoling him until he walked back inside and added his name to the rolls.

Jenkins took her lead and grew into a dogged activist who will spend days, even weeks, texting, calling and urging even complete strangers to vote.

This kind of activism has never been more vital as Republicans in at least 43 states attempt to manipulate the political process and deny their fellow Americans a voice, putting democracy at risk.

After a huge turnout of Black voters in Georgia catapulted two Democrats to the Senate in 2021, Republican-led states introduced hundreds of bills and passed nearly three dozen laws aimed at either disenfranchising the poor, citizens of color and other vulnerable groups or throwing up roadblocks making it difficult for them to vote.

Only bold action in the Senate—passing legislation to preserve voting rights—can halt these attacks and ensure a government of all the people.

“It’s really the tipping point. We’re losing right now,” warned Jenkins, a member of United Steelworkers (USW) Local 1014, noting the wave of voter suppression harkens to an age when the nation’s leaders first denied the ballot box to Americans based on race, gender and socioeconomic status and later used poll taxes and poll tests to turn away Black voters.

Some of the new laws around the country restrict mail-in balloting and eliminate drop-off boxes, making it more difficult for people with disabilities and workers juggling multiple jobs to cast their votes. Others impose onerous voter identification requirements that disproportionately burden voters of color.

These laws, many of them facing legal challenges from civil rights groups, concentrate power in fewer hands and undercut ordinary Americans’ capacity to shape the country and their communities.

The franchise enables Americans to fight for a just tax system, equitable infrastructure, fairly funded schools and responsible policing. The ballot box paves the way to a country where every voice is heard. The greater the number of voters, the more resilient and representative democracy will be.

That’s why, going back to the 1970s, Jenkins’ grandfather began signing up voters. That’s why Jenkins’ mom participated in voter registration drives and regularly took the opportunity to discuss voting with visitors to her home. And that’s why, for generations now, registering to vote has been a rite of passage for 18-year-olds in Jenkins’ extended family.

“Voting is our power,” explained Jenkins, who works at U.S. Steel’s Gary Works and volunteers with the A. Philip Randolph Institute, a labor and civil rights organization.

“Voting is our voice. It’s our protest. One of the most significant ways we can get change is at the voting booth,” he said, noting that Dr. Martin Luther King Jr. saw voting rights as a pathway to his dream of a more equitable society.

It’s precisely the fear of a mobilized, change-hungry electorate that’s spurring Republicans’ furious efforts to clamp down on voting now.

High turnout of Native American voters in 2020 played a monumental role in delivering Arizona for Joe Biden, the first Democratic presidential candidate to win the state since 1996. It was no surprise when the Republican-dominated legislature later passed new regulations for mail-in voting, action certain to disenfranchise Native Americans, some of whom struggle with spotty mail service and would have to drive hundreds of miles to cast their ballots at polling places.

Because they know their policies will never win over growing numbers of ordinary voters, Republicans try to keep them from voting at all.

“If you can’t beat them one way, beat them another way,” said Arvella Greenlaw, a member of USW Local 6787 who works at Cleveland-Cliffs’ Burns Harbor facility in Indiana, summarizing the Republicans’ playbook. “They don’t fight fair.”

Greenlaw, a longtime voter registration activist and supporter of worker-friendly candidates, recently fired off a letter to her U.S. senators urging them to support federal voting rights legislation. She posted the letter on her Facebook page and encouraged friends and relatives to call and write their senators as well.

Senate Majority Leader Charles Schumer took up the legislation, already passed by the House, on January 19. But it suffered defeat. The bill would have helped to turn back voter suppression laws in the states, establish fair, uniform standards for accessible voting and ensure states’ compliance.

“We need to do this in order to protect our rights, rights we already have, rights we shouldn’t have to still be fighting for,” stressed Greenlaw, who immersed herself in politics to advocate for laws supporting working families.

“Otherwise, we will be pushed into the background,” she added. “We’re just going to get stepped on.”

In continuing the fight, Jenkins says he draws perseverance from these words King spoke during an address at Spelman College in Atlanta in 1960:

“He saw the larger picture,” Jenkins said. “He could have given up, but he kept going. I feel like if he could do that, why can’t we?”

Tom Conway is international president of the United Steelworkers (USW).
This article was produced by the Independent Media Institute.
Source: Nation of Change