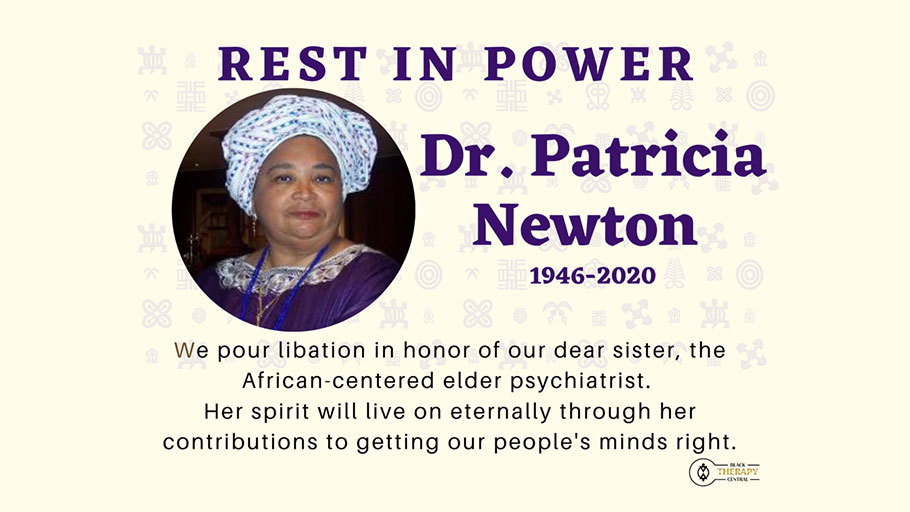 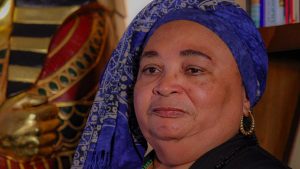 We pour libation for Dr. Patricia A. Newton, an African-centered psychiatrist, traditionalist, elder, & our dear sister in honor of her passing and her life. Her spirit will live on eternally through her contributions to getting our people’s minds right.

About Dr. Patricia A. Newton

Dr. Patricia A. Newton was an internationally acclaimed psychiatrist, thought leader, scholar, lecturer, published author, pioneer, and traditional Ghanaian Royal. Above all, she was a community elder, a wife, and a friend. We honor her, her family, and her life in this space.

From a European worldview, the fields of psychology and psychiatry do not mix. Dr. Patricia Newton stood strong as an African-centered psychiatrist who understood the importance of both psychiatry and psychology. She saw that the trauma Black people face has both environmental and chemical origins.

Most notably, Dr. Patricia Newton founded the Black Psychiatrists of America in Maryland. Through that organization, her writings, appearances, and community outreach, and international collaborations, Dr. Newton redefined how we look a Black psychiatry today.

In 1969, she founded the Black Psychiatrists of America (BPA) to create resources for psychiatrists who recognize that European psychiatry training is inadequate to address the healing that Black people throughout the Diaspora need. She grew that organization into an international organization. She later went on to serve as a President before becoming the CEO & Medical Director serving on its Council of Elders.

Beyond her role, this organization is her legacy and has grown into a hub and a resource for thought leadership in Black psychiatry.

As a behavioral science specialist, Dr. Patricia Newton founded and became the president and medical director of Newton & Associates and President of Newton-Thoth, Inc. According to her bio, her clinical psychiatry focus involved anxiety disorders with special emphasis on PTSD, depression, chronic mental illness, and transcultural psychiatry encompassing the interface of Western and Traditional African healing systems.

Dr. Patricia Newton also paved the way by integrating African spirituality as a foundational part of Black mental health. She was enstooled as both a queen mother and female king (Divisional Chief) in Ghana, West Africa, where she received the traditional name Nana Dr. Akosua Akyaa. Her positions were not honorary titles. They were actual positions with full rights and entitlements that make her an Ashanti Royal.

She pioneered work with traditional healers domestically in the US and internationally in Africa, South America, and Brazil. In her work internationally, she engaged psychiatrists and other wellness professionals in Africa, South America, the Caribbean. Through those interactions, she pioneered techniques for the chronic mentally ill. She also developed cultural competency mental health standards for professionals to help HIV/AIDS.

Also, according to her bio, she served on the academic faculty for over sixteen years at Johns Hopkins School of Medicine while becoming the first female chairperson of the Department of Psychiatry at Baltimore’s Provident Hospital.

Dr. Newton attended medical school at the Washington University School of Medicine in St. Louis, MO, and her psychiatric training there as well. Additionally, she was one of the first American Psychiatric Association APA/NIMH Fellows as a psychiatric resident that permitted her to attend the inaugural meeting of the BPA’s Transcultural Psychiatry Conference in Haiti in 1979.

Moreover, her innovations include culturally competent holistic treatment in chemical dependency and prevention, having her work embraced internationally in Africa, the Caribbean, and in Great Britain with a community-based clinic named in her honor there.

Dr. Mawiyah Kambon, Black Therapy Central co-founder worked closely with Dr. Newton over decades through various collaborations, organizational interactions, and at overlapping speaking engagements. Dr. Kambon will be doing a special tribute to her on an upcoming episode of the Black Therapy Central Show.