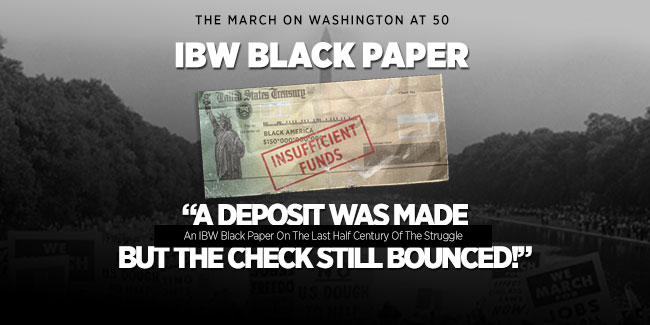 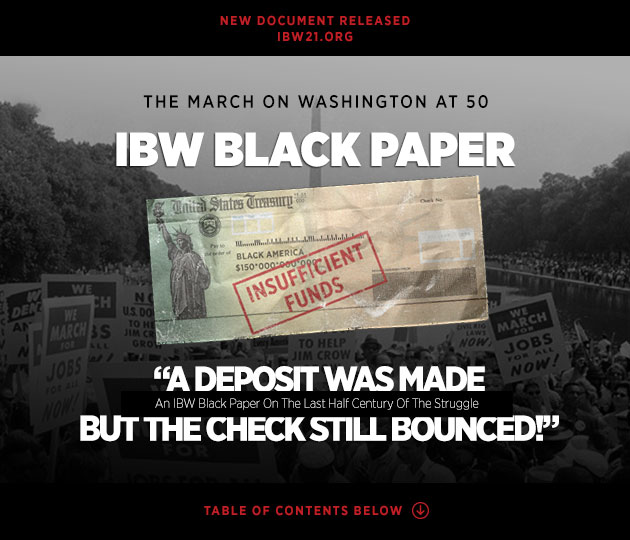 The institute of the Black World 21st Century is delighted to finally release this Black Paper – which has been nearly three years in production. Originally targeted for release in August of 2013 to coincide with the 50th Anniversary of the March on Washington, the contributions to this volume expanded considerably beyond what was originally anticipated. Hence, additional time was required to edit and format it for release.

A lot has transpired in the past two years, not the least of which has been the epidemic of killing of unarmed Black men and women by the police and the dramatic rise of the Black Lives Matter Movement as a powerful response. These developments have in no way dated the basic themes and conclusions of the stellar collection of articles and essays in this Black Paper. The “promissory note” is still coming back marked “insufficient funds.” Therefore, the analyses and prescriptions for action in the Black Paper should serve to embolden Black people and our allies to intensify the struggle for racial justice and transformative change in this nation.

This IBW Black Paper is focused on the last half a century of struggle from 1963 to the present in recognition of the 50th Anniversary of the Historic “March on Washington for Jobs and Freedom.” It is an effort to offer a perspective, a 50-year reflection on the progress, or lack thereof, of African-Americans since 1963, and an effort to suggest strategic directions for the future, which will hopefully re-ignite movements for democracy and social change. We perceive this Black Paper as a major contributor to the discourse regarding how we as Black people see ourselves evolving as a citizen nation in the neo- Civil Rights, neo-Black Power era of Obama and beyond. Over the last 50 years we argue that a deposit was made into the account by America (by providing relative “equality” for some Black folks), but the check still bounced because it did not provide “equality“ for the overwhelming majority of Black folks.

The messages of this Black Paper are directed at a cross section of Black America: everyday people, activists, organizers, scholars, workers, planners, as well as the progressive social justice movement. This we feel is necessitated because of the general assault on Black critical thinking and the resulting intellectual timidity to discuss Black issues and concerns. We categorically reject the oft-repeated assertion that targeting conversation and analysis to Black people, or focusing on Black issues is politically incorrect in today’s “post racial environment.” IBW regards such distorted thinking as fundamentally flawed and incorrect (whether it comes from Black folks, white folks or other folks) and calls on sober minded persons of all races to join us in this 50 year reflection, analysis and dialogue. By extension then, the messages of this Black Paper are thus also directed to all people and communities of conscience and good will who still dream of a socially just and democratic society which also respects the unique distinctiveness of all of its people as Martin and Malcolm attempted to do 50 years ago.

We hope that you will find this Executive Summary and full Black Paper useful in the dialogue on building a democratic and just society in America, free of all forms of domination, oppression and exploitation.

Establishes socio-cultural significance of IBW Black Paper around addressing State of Emergency in Black America. “In the best tradition of scholar activism,” Dr. Daniels writes, “the Black Paper is comprised of historical compendiums of pertinent data,” representing “a call to action.”

Explores the content and importance of the Black Paper. The Black Paper offers “a 50-year reflection on the progress, or lack thereof, of African Americans since 1963, and an effort to suggest strategic directions for the future, which will hopefully re-ignite movements for democracy and social change.”

Provides the historical context of the Black Paper. Dr. Sanyika “argues/contends that African American social movements are an absolute requirement to achieve even the most modest levels of social justice in America, and are needed to address the racial divide between blacks and whites, as well as the deepening class divide among African Americans.”

“The history of economic growth in America has depended greatly on the strategy of wealth accumulation through home buying in promising neighborhoods and realizing equity growth in that home over time, Atty. St, Juilen argues.” St. Julien explores the modern evolution of this devastating decline in home ownership among African Americans, including its consistent discriminatory character, culminating most recently in the mortgage meltdown, disproportionately impacting African Americans most.

Dr. King and Ms. Russell explore the evolution and current state of black public education since 1963, pointing the way forward for progressive change in light of this history. The authors argue that “devastating educational ‘reforms’ ushered in by corporate elites, lobbyists, and politicians are undermining public education, particularly for Black students.”

Building off long-standing efforts linking economic development, health, and “environmental stewardship, authors Grant, Wright, and Dr. Wood trace the compelling and tragic loss of landownership, by African Americans, most often due to racism and discriminatory policies, resulting in a serious decimation of ownership and wealth accumulation in contemporary times. In light of the recent Pigford case, the authors demonstrate that “today….Black farmers are at the center of larger social movement that link health, hunger, and independence in one broad vision for social justice.”

Dr. James explores the contours in the development of the African American family over the last fifty plus years, in both policy and practice. “Today, many of the problems highlighted by scholars during the era of the 1960s, have worsened for African Americans”

Dr. Pollard critically examines the state of the black church and black religion in the intervening years since the mobilization of black clergy and religious communities, culminating in the prophetic speech of Dr. Martin Luther King Jr on the steps of the Lincoln Memorial. Tracing its dualistic sacred and social dimensions, Dr. Pollard calls the Black church to assume its historical role of the conscience of the nation, noting that “Today Black churches are at a crossroads.”

Citing starling statistics of historical disparities and miscarriages for justice, Attorney Taifa examines efforts to transform criminal injustice in America. “Today, 50 years later, the United States has moved from overt racist lynchings and explicitly blatant discrimination as the order of the day to mass incarceration as its punishment of choice.”

Bill Fletcher examines the shifts and changes in the condition of Black workers and organized labor since 1963. Due to social, political, and policy pressures impacting the transformation of labor unionism, “Black activists within the labor movement have, Fletcher argues, “been confronted with a very difficult situation.”

Dr. Reese examines the post-1963 effort by African Americans to develop viable and sustainable financial institutions to drive significant economic growth. “From 1865 to 1965,” Dr. Reese reasons, “the talented tenth of Black America devoted much of its time, talents, and treasure to create and build Black institutions to serve Black America.” He concludes that in the years since the 1963 March on Washington and the passage of the 1964 Civil Rights Act, “Black financial service firms have made no gains compared with their White-owned peers.”

Dr. Fauntroy examines the success and challenges of the Voting Rights Act, as an illustration of larger political changes impacting African America since the 1963 MOW. Citing that the 1965 Voting Rights Act was “the most important change in Black politics following the March,” he also notes that “the VRA…changed the face of American government…” creating “an environment whereby White America became accustomed to seeing Black candidates on ballots around the nation.”

Mr. Fraser explores the continuing racial wealth gap that continues to stagger black economic development, more than 50 years since the March on Washington. Fraser contends that “the economic fortunes of today’s Black households are still tied to the explicitly racist economic institutions in America’s past-especially those that existed during key phases of wealth redistribution.”

George Curry explores significant historic changes in the state of black newspapers, magazines, journalists, and media in the last half century. More than fifty years later, Curry argues that “a handful of Blacks have ascended to the upper rungs of management but their ranks and the level of reporters and editors below them are thinning as the news industry-newspapers, magazines, radio stations, TV stations and cable networks-constricts from rapid consolidation and the emergence of alternative digital platforms.”

Dr. Kamara demonstrates the continuities of the American civil rights and black power movement and independence movements on the African continent. Demonstrating interconnected synergies of Pan African relationships, experience and identification, using the example of W. E. B. Du Bois, Dr. Kamara argues effectively that “Du Bois symbolized the necessary link between scholarship and activism from which change emanates.” Mediated in the larger global 21st century world, Dr. Kamara provides instructive illustration of the historic “synergistic impact of ideas and influences” between social justice movements in Africa and America for reenergizing a revitalized Pan African Movement.

Don Rojas traces the parallels of civil and human rights struggles and influences in the United States and the Caribbean, culminating in recent efforts by CARICOM to push for reparations redress. Noting “the long and rich history of Caribbean-born political leaders who have played pivotal roles in the African American freedom struggles throughout the 20th Century,” Rojas makes the case for the understanding the broader impact of interrelated influences in strengthening a re-energized Pan African movement.