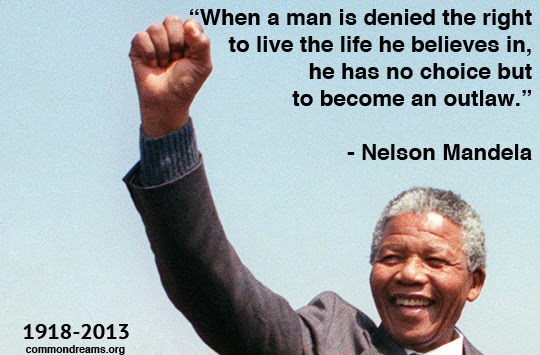 You Are Here: Home » Blog » News & Current Affairs » 12 Mandela Quotes That Won’t Be In the Corporate Media Obituaries

On “sanitizing” the legacy of anti-apartheid leader Nelson Mandela

Nelson Mandela, who died yesterday at age 95, was a South African anti-apartheid revolutionary who served as President of South Africa from 1994-1999.

During the 1950’s, while working as an anti-apartheid lawyer, Mandela was repeatedly arrested for ‘seditious activities’ and ‘treason.’ In 1963 he was convicted of sabotage and conspiracy to overthrow the government, and sentenced to life imprisonment. Mandela served 27 years in prison before an international lobbying campaign finally won his release in 1990.

In 1994, Mandela was elected President and formed a Government of National Unity in an attempt to defuse ethnic tensions. As President, he established a new constitution and initiated the Truth and Reconciliation Commission to investigate past human rights abuses and to uncover the truth about crimes of the South African government, using amnesty as a mechanism.

Nelson Mandela was a powerful and inspirational leader who eloquently and forcefully spoke truth to power. As tributes are published over the coming days, the corporate media will paint a sanitized portrait of Mandela that leaves out much of who he was. We expect to see ‘safe’ Mandela quotes such as “education is the most powerful weapon which you can use to change the world” or “after climbing a great hill, one only finds that there are many more hills to climb.”

We wanted to share some Nelson Mandela quotes which we don’t expect to read in the corporate media’s obituaries: