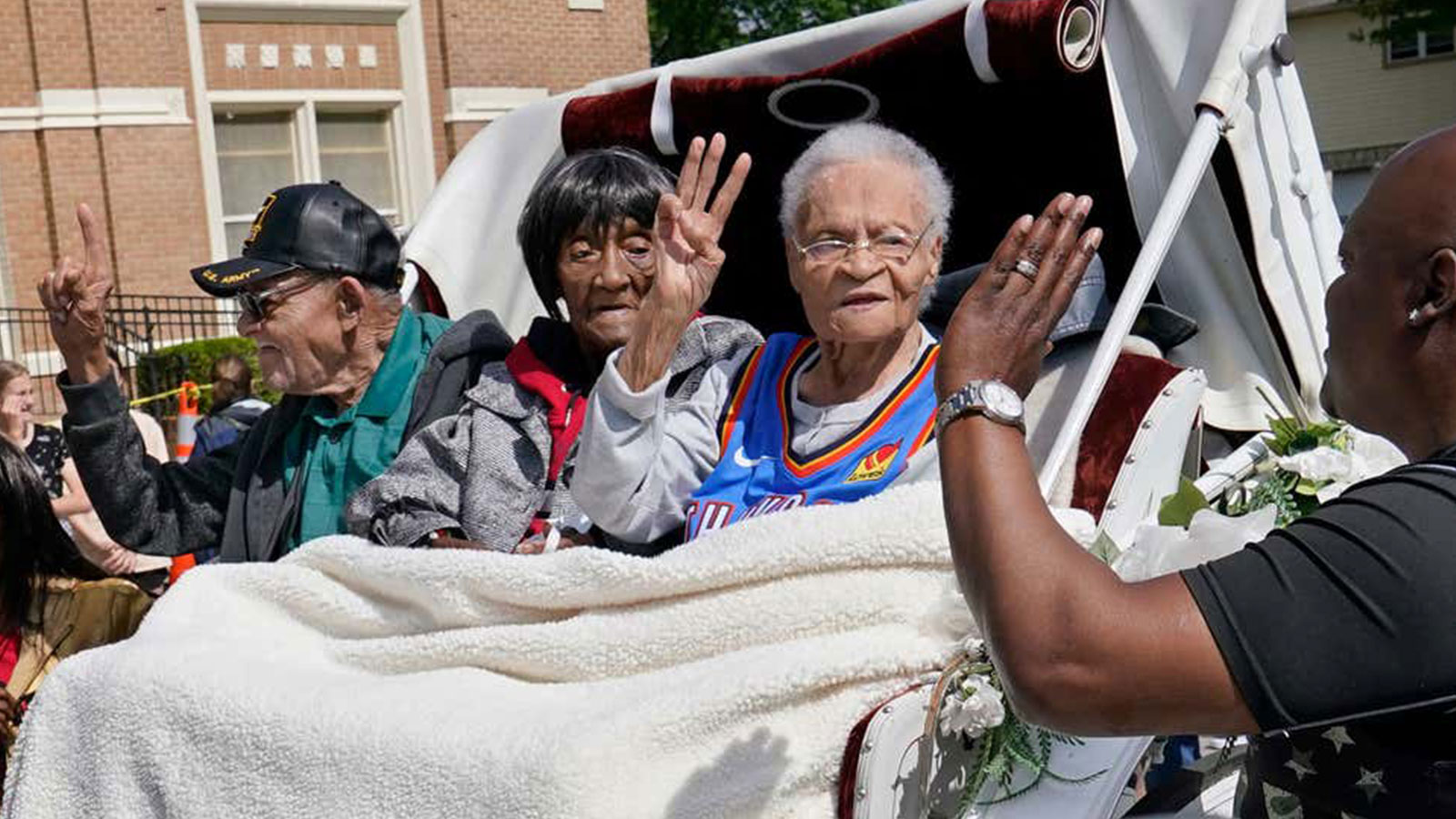 While in Ghana, the siblings will meet government officials, visit historic sites and participate in a traditional naming ceremony.

Viola “Mother” Fletcher and Hughes “Uncle Red” Van Ellis, sibling survivors of the 1921 Tulsa Race Massacre, and their grandchildren were welcomed into Ghana on Saturday to kick off their week-long visit to the African country.

According to Paris-based France 24, the trip is part of a government campaign to give African descendents an opportunity to come “back home.” Fletcher, 107, and Van Ellis, 100, arrived in Accra, Ghana’s capitol, to a crowd of onlookers and government officials waiting to receive them.

“I had everything a child could need… But within a few horrible hours, all of that was gone,” said Fletcher. ”Now after all these years, I’m so happy to be fulfilling a lifelong dream of going to Africa and I am so pleased that [it] is to beautiful Ghana.”

The Tulsa World reports that the trip all-expense-paid and is co-sponsored by Virginia-based social media platform Our Black Truth and the Diaspora Africa Forum, based in Ghana. Democratic state Rep. Regina Goodwin of Tulsa told the World that the trip stemmed from a conversation that Fletcher had with Our Black Truth co-founders Michael and Eric Thompson earlier this year.

Fletcher mentioned to them that she’d always wanted to go to Africa.

“She spoke it into existence,” Goodwin said. “And when good people send out good energy, good people with money come to the rescue.”

Michael Thompson, who will accompany the group to Ghana, said he was excited to be able to “make the dream come true.”

“It’s a momentous occasion,” he said. “Our goal is to replace some of these horrific memories of Black Wall Street with some great memories.”

From May 31 through June 1, 1921, more than 300 Black residents were murdered and hundreds of Black-owned businesses were destroyed by a white mob that descended upon Greenwood, a neighborhood in Tulsa, Okla.

Greenwood was known as “Black Wall Street” due to its status as a thriving business district for its affluent Black residents. This year marked the 100th anniversary of the massacre, which is infamously known as one of the worst episodes of racial violence in America’s history.

Fletcher and Van Ellis, along with 106-year-old Lessie Benningfield Randle, appeared before Congress in May and testified as survivors of the Tulsa Race Massacre to push for reparations.

More from the World:

Tulsa attorney Damario Solomon-Simmons, who is representing the survivors and others in a state lawsuit seeking massacre reparations, said the gesture to honor the survivors with the trip was “very powerful and emotional.”

“It’s not reparations; it’s a gift of love from our people showing how our treasures ought to be treated,” he said.

The World reports that while in Ghana, the survivors and their family will be following strictly observed COVID-19 protocols. They will also have opportunities to meet President Nana Akufo-Addo, visit several historical sites and take part in a traditional naming ceremony.

During that ceremony, according to the World, Fletcher will be honored as a Queen Mother and Van Ellis as a Chief.

Source: The Root
Featured Image: 2 Survivors of the Tulsa Race Massacre Arrive in Ghana for Week-Long ‘Dream’ Trip to Africa