A Demagogue, Fascist, and Serious Threat: UK Mobilizes to Make Sure Trump Knows He ‘Is Not Welcome’

You Are Here: Home » Blog » News & Current Affairs » A Demagogue, Fascist, and Serious Threat: UK Mobilizes to Make Sure Trump Knows He ‘Is Not Welcome’ 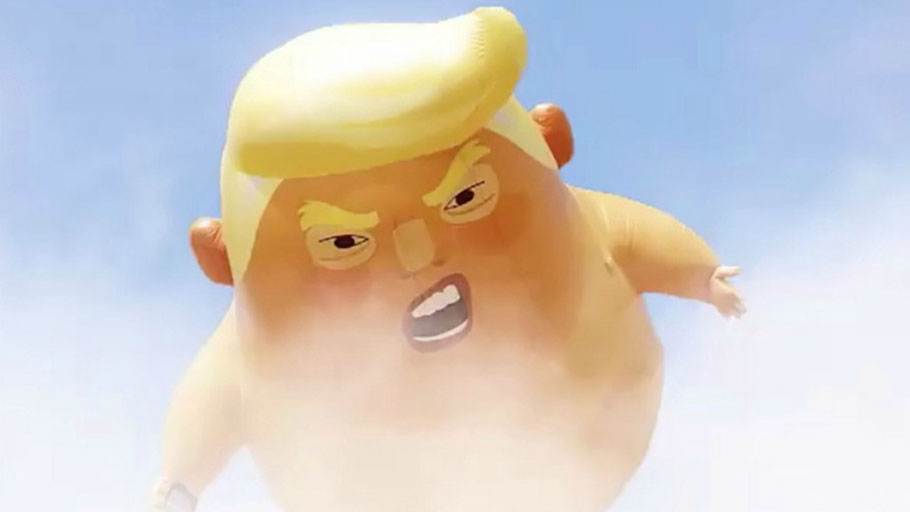 The Trump baby blimp is set to fly over London as part of mass protests against the U.S. president’s state visit.

“Donald Trump is just one of the most egregious examples of a growing global threat. The far-right is on the rise around the world, threatening our hard-won rights and freedoms.”

With the city of London effectively on “lockdown” in anticipation of the protests—complete with the now-famous Trump Baby Blimp—that are expected to flood the city’s streets on Tuesday, U.S. President Donald Trump touched down in the United Kingdom Monday for his first state visit shortly after tweeting an attack on London Mayor Sadiq Khan.

“Sadiq Khan, who by all accounts has done a terrible job as Mayor of London, has been foolishly ‘nasty’ to the visiting President of the United States, by far the most important ally of the United Kingdom,” Trump tweeted just before landing at the Stansted Airport in London on Monday. “He is a stone cold loser who should focus on crime in London, not me.”

“We know Trump isn’t a joke—he is responsible for rampant xenophobia, sexism, and transphobia and the creeping rise of far-right politics.” —Anna Vickerstaff

Trump’s attack on Khan came after the London mayor—who granted permission for protestors to fly the Trump baby blimp during Tuesday’s mass demonstrations—accused the U.S. president of behaving like “the fascists of the 20th century to garner support” and said he would join the U.K. Labour Party in boycotting the state visit.

“Donald Trump is just one of the most egregious examples of a growing global threat,” Khan wrote in an op-ed for The Guardian on Saturday. “The far-right is on the rise around the world, threatening our hard-won rights and freedoms and the values that have defined our liberal, democratic societies for more than seventy years.

Khan further explained his opposition to “rolling out the red carpet” for Trump in an interview Sunday on Sky News:

.@SadiqKhan tells Sky News on #Ridge that the UK shouldn’t “roll out the red carpet” and give @realDonaldTrump a state visit.

Khan’s view of Trump as the face of a global far-right movement was echoed by the organizers of Tuesday’s demonstrations, which are expected to bring hundreds of thousands of people into the streets across the U.K.

Anna Vickerstaff, part of the team of demonstrators that will be “babysitting” the Trump blimp Tuesday, said the protests against the U.S. president are about far more than displaying a silly balloon designed to humiliate Trump.

“We know Trump isn’t a joke—he is responsible for rampant xenophobia, sexism, and transphobia and the creeping rise of far-right politics,” Vickerstaff wrote in an op-ed for The Independent on Monday. “His climate denial and persistent facilitation of the fossil fuel industry is a death sentence for communities in the global south. But if flying a balloon caricature is what gets under his skin—then that’s exactly what we’re going to do.”

“Our balloon,” wrote Vickerstaff, “is part of a proud history of political satire in the U.K. that sends a clear, orange, message to Trump and his politics of hate that they are not welcome here.”

‘We’re flying the Trump baby blimp again – because the US president doesn’t deserve our respect’https://t.co/wkRNdWVgBk

According to the U.K.-based Metro, a “huge police and security operation” is in place as London authorities prepare for the mass protests against the U.S. president’s three-day state visit.

In addition to the Trump baby blimp, the Metro reported, a “16ft talking robot of Mr. Trump sitting on a gold toilet is also expected to make an appearance. It depicts the American leader with his trousers round his ankles while tweeting and says some of his well-known phrases such as ‘stable genius’ and ‘no collusion,’ as well as breaking wind.”

Ahead of Trump’s arrival in the U.K., The Guardian expressed the view of many Britons when it declared in an editorial Sunday that “the president is not welcome.”

“Mr. Trump is a demagogue who represents a threat to peace, democracy, and the climate of our planet,” the newspaper said. “As elected leader of the U.K.’s closest ally, he can’t be ignored. But making him, his wife, and four adult children the honored guests of the Queen risks legitimizing his destructive policies, his cronyism, and his leanings towards autocracy.”