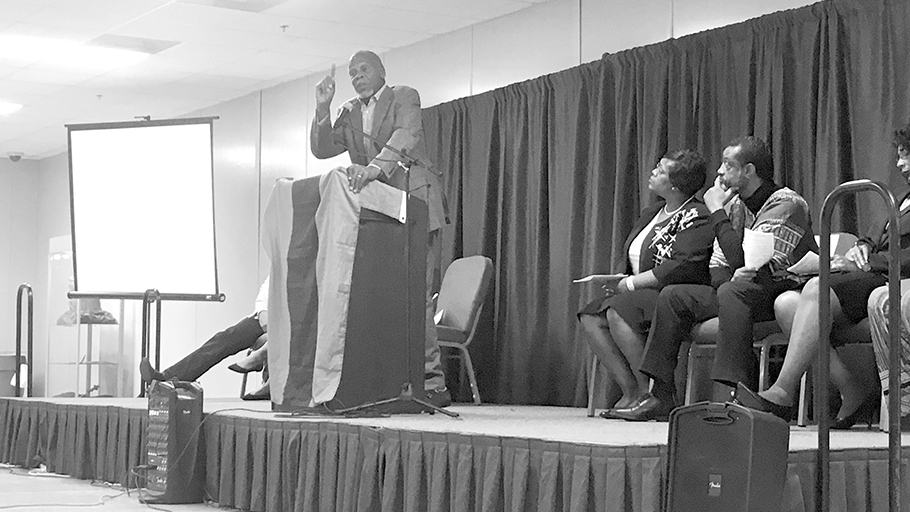 Reparations? Yes. When? Now. This was the rallying cry when the National African American Reparations Commission convened in New Orleans for a benefit reception on Nov. 30, 2017. The commission arrived in the Crescent City with actor, humanitarian, and activist Danny Glover as its keynote speaker, alongside local activists and cultural ambassadors to discuss how reparations can uplift the Black community.

“We have to make demands. We can’t just sit around the table and accept what’s going on,” Glover said. “The whole idea of reparations is demanding justice, it’s all about that.”

Civil rights activists from across the country and around the world gathered at Southern University of New Orleans to discuss the importance of reparations for people of African descent across the country, and to raise funds in support of the commission’s work.

This year’s benefit included special guests Mireille Fanon Mendes-France, the president of the Frantz Fanon Foundation, Ester Ogulari a human rights activist from Colombia, and Dara Cooper of the Movement for Black Lives. Dr. Lisa Mims-Devenzin, SUNO’s chancellor and Dr. Clyde Robertson, the director of the Center for African and African American Studies at SUNO, welcomed the public to this year’s event, and Chief Shaka Zulu, chief of the Yellow Pocahontas Mardi Gras Indians were the featured cultural performance, alongside spoken word artist Michael “Quess” Moore. The benefit was convened by Dr. Ron Daniels of the reparations commission.

The National African American Reparations Commission (NAARC) was established in April 2015. The organization consists of professionals in fields like medicine, law, academia, and civil rights to fight for advocacy and compensation of the African-American community. Not only does the NAARC want compensation, but the also demand for the restoration of the African-American reputation.

The NAARC was convened by the Institute of the Black World 21st Century, and the Caribbean Community Market (CARICOM) Reparations Commission helped inspire its model for seeking reparations in the United States. The NAARC designed a Preliminary Reparations Program, which serves as a public educational tool to advance the reparations movement through a national dialogue. The program will encourage people of African descent to support the concept of reparations as a tool for uplifting Black people.

However, this year’s speakers reminded the public that the reparations movement is not new. The commission considers itself as following in the legacy left through the works of activists like Malcolm X, Congressman John Conyers, and the Nation of Islam. The commission says it dedicates its work to Queen Mother Moore, a Louisiana native and a civil rights activist.

Other guest speakers at this year’s benefit reception in New Orleans included Dr. Julianne Malveaux, the former president of Bennett College for Women in North Carolina who joined Glover at the podium. Malveaux explained how reparations can be used for education that leads to other opportunities for the Black community.

The support of celebrities and public figures are important to helping in explaining these three things to ordinary citizens. For this reason, Glover’s presence at the benefit helped to highlight the work of the commission.

While most people know Glover as the notorious character Mister, from The Color Purple, starring Whoopi Goldberg, most people do not know that Glover has been an avid participant in activism for almost his entire life. Glover said he started off as a paperboy in San Francisco, waking up at sunrise to read to find out what was happening in the world. “Every morning, I would get up at 4 to 4:30 a.m. to deliver my papers at 14 years old, which I still have a habit of getting up at 4:30 a.m.”

By the time Glover graduated from San Francisco State University, he joined forces with peers to lead the longest student strike in United States’ history in November, 1968.

“Sometimes we have to reflect on the history that has happened to us,” Glover said as he began to tell the audience about his family’s history in Louisville, Ga. Glover said his great grandmother Mary Brown, who although was in his life for a short period of time, helped shape his fight for human rights.

Brown shared with Glover her life’s struggle, he told the audience. She was emancipated by the time she was 10 years old, and then faced Jim Crow laws that he said made her feel no difference between being a free citizen and being a slave.

“We think of slavery as one singular moment when we see the antebellum encampments and plantations, but it was an expansion to that, which brought this country the first tool to the industrial revolution. That was cotton,” Glover explained. “This made this country, by 1840, the richest country economically in the world. Which was clearly built on the backs of us,” he added.

Glover urged the audience to take the feelings of the African-American community and use them to take a stand for the reparations movement. “One thing I learned now is that we need to take ownership of it and start making a change now,” said Dr. Mary Louise Alexander Lee, a New Orleans native, who attended the benefit reception.