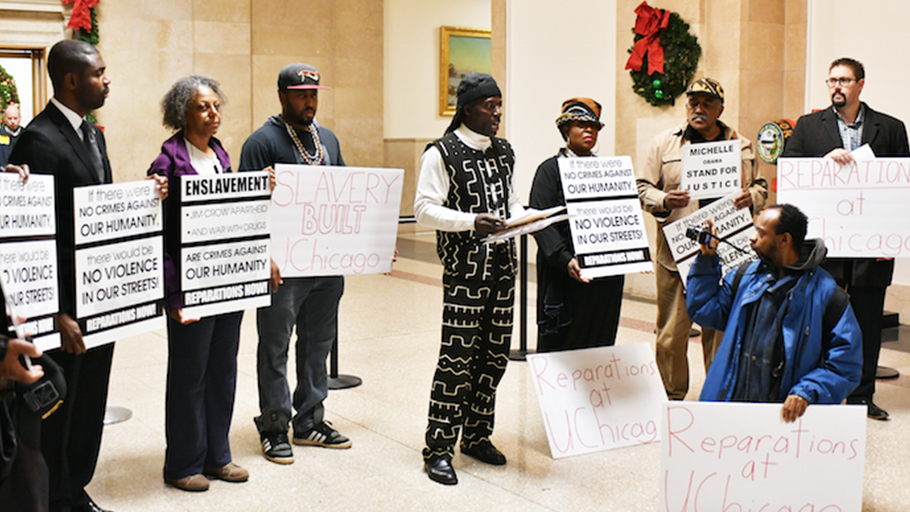 Protesters at City Hall demand reparations from the University of Chicago, which profited from the sale of land donated by slaveowner Stephen A. Douglas. Photo by Robert Earl.

The National Coalition of Blacks for Reparations in America held a news conference to lay out a multitude of demands in respect to the University of Chicago’s founding. The group is calling on the city to void all contracts with the University until it complies with a 2002 ordinance requiring all companies conducting business within the city to disclose all records in respect to slavery.

The Slavery Era Disclosure Ordinance was modeled after California legislation passed two years earlier requiring insurers doing business with that state to disclose their records on slave policies. The Chicago ordinance goes further, requiring all companies that do business with the city—insurance companies included—to make such disclosures.

Currently the university’s trustees only recognize 1890 as the official starting point in its origin narrative. Yet serious students of the university’s institutional history have long known that the University of Chicago actually began much earlier, in 1856, with the founding of a small Baptist college on 35th Street and Cottage Grove Avenue.

In its report the Reparations group writes, “Black people do not need a seat at the University’s reparations table. They need to own that table and have full control over how reparations are structured.” The article also argues that “establishing an African American Studies department should be a no-brainer,” as should “a concerted effort to recruit and develop faculty of color while vigorously recruiting and mentoring underrepresented students to attend the university.

“It was really about asking the right questions,” Guy Emerson Mount, University of Chicago Postdoctoral Fellow, and co-founder of Reparations at UChicago Working Group, said. “We had a conference to talk about reparations from the university after what happened with Georgetown.”

Georgetown University, which last year had to respond to the story that 272 slaves were sold to help secure the future of the school, agreed to offer preferential admission to slave descendants in response to the 1838 sale, worth the equivalent of $3.3 million today.

University of Chicago’s history goes back to the selling of 142 slaves for the equivalent of $1.2 million today. That money was used to complete the move from 35th and Cottage Grove to its current Hyde Park location. But in comparison to Georgetown, the University of Chicago had no history prior to the inception of the donation of slave money and owes their entire history to Stephen Douglas and his slave money according to the report.