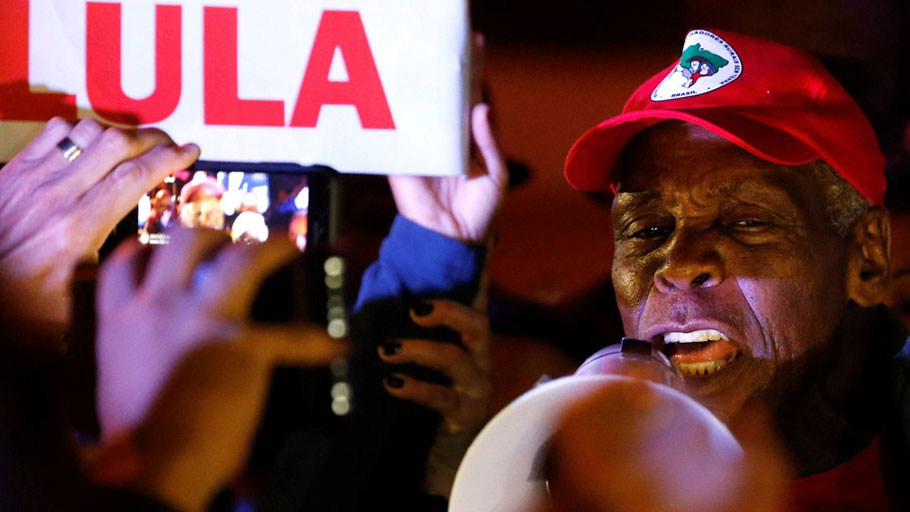 Glover, a UN Goodwill Ambassador, met with Lula in March to express solidarity and support for his presidential candidacy. Photo by Reuters

On Monday, Glover had breakfast with the family of Marielle Franco, the city-council member and LGBT activist murdered in Rio de Janeiro.

During a trip to Brazil to show solidarity with popular movements and leaders, actor Danny Glover arrived in Curitiba where former President Luiz Inacio Lula da Silva is currently imprisoned to join occupier protesters at the Free Lula Vigil.

The trip comes after the actor, famous for his roles in films like ‘Lethal Weapon’ and for producing documentaries such as ‘The Black Power Mixtape,’ traveled to Rio de Janeiro to meet with social movements.

On Monday, Glover had breakfast with the family of Marielle Franco, the City Council member and LGBT activist murdered in Rio de Janeiro.

During the weekend, Glover visited favela communities in Rio who had experienced police raids as a result of the military presence in the city.

“I visited the Rochina community of Rio de Janeiro to bring attention to the devastating effects of the daily police raids happening there, and to help raise the voices of their residents who want the violence to STOP & and gov’t accountability!” Glover Tweeted.

Glover, who is also a United Nations Goodwill Ambassador, met with Lula in March to express solidarity and support for his presidential candidacy.

“I came here to demonstrate my solidarity and to say that there are others in my country who also have solidarity with you. We have to use our voice because we know that the moment is important not only for Brazil but for all the Americas,” Glover said after the visit.

“We are also fighting the far right in our country, and his (Lula’s) presidency was a remarkable example of policies for the poorest.”

Lula, Brazil’s most popular politician and a poll favorite for upcoming presidential elections, was imprisoned in March after Brazil’s Supreme Court rejected his habeas corpus appeal against a 12-year prison sentence previously issued over corruption and money-laundering charges.

Legal experts and observers, however, argue that his sentencing stems from a carefully orchestrated ‘lawfare’ and media campaign to sideline one of Brazil’s most popular politicians from participating in this year’s presidential election.

On Race: The Moral High Ground