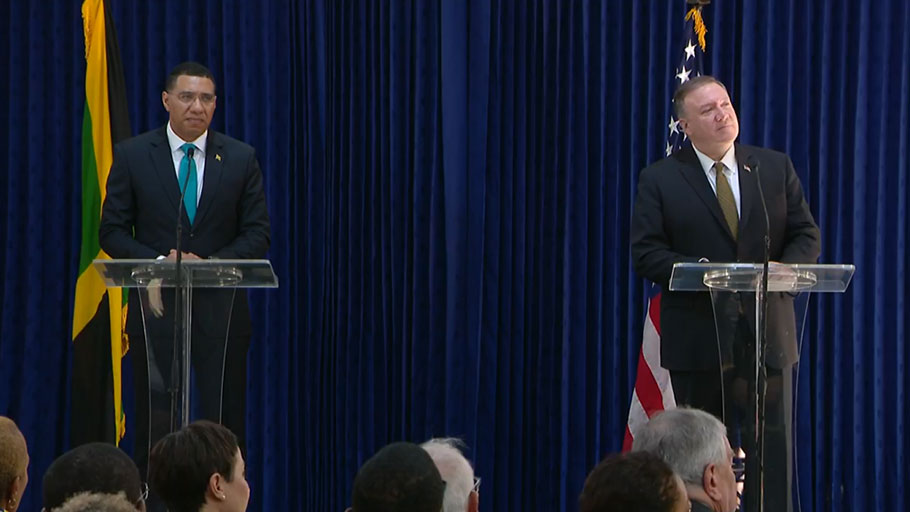 By the Jamaica Observer —

KINGSTON, Jamaica – United States Secretary of State  and Prime Minister Andrew Holness have both denied that the decision to invite select Caricom states to a meeting in Kingston today (January 22) is an attempt to split the regional grouping.

“There is no intent for the United States to divide Caricom. Not yesterday, not today, not tomorrow,” Pompeo told journalists at a joint media briefing with Holness at the Office of the Prime Minister in Kingston this morning.

“That’s true of Jamaica, as well as it is true for many of the folks I will visit with this afternoon. We want to invite them [Caricom members] all to be part of the economic prosperity, security zone that is this region,” added Pompeo as he declared his appreciation for the leadership displayed by Jamaica in the region.

Critics of today’s meeting have charged that Pompeo, as part of the agenda of the Donald Trump Administration, is trying to divide Caricom into states which line up behind the US on Venezuela, and on the next secretary general of the Organization of American States (OAS) on one side, and the states which are refusing to toe the American line on the other side.

The Trump Administration does not recognise the Government of President Nicolás Maduro in Venezuela and is also seeking votes for the re-election of Luis Almagro as General Secretary of the OAS in the election set for March 20.

But many Caricom states still recognise Maduro as the legitimate president of the Bolivarian Republic while supporting Ecuadorian diplomat, Maria Fernanda Espinosa, for the top job at the OAS.

Addressing the OAS issue at this morning’s media briefing Pompeo declared that the US accepts the individual positions of Caribbean states.

“We made it very clear who we think should be the next leader of the OAS. We have made that very clear because we think he [Almagro] has demonstrated his ability to return financial stability to the institution and return this institution to a really important place … for all member states of the OAS,” said Pompeo.

According to the US Secretary of State, the Trump Administration welcomes dialogue with all members of Caricom as it is convinced that there are common interests.

For his part, Holness said Jamaica would not engage in any policy that would divide Caricom.

“Caricom is an important fraternity of countries. We are a trading bloc with our custom union, but more than that it is the fraternity and we want to keep it that way,” said Holness.

“In modern diplomatic relations, and in the exercise of foreign policy, we all must respect the sovereignty of countries to determine how the structure their foreign policy.

“When friends asked to be hosted, or for us to host them, we are friends so we do that. We are friends with the United States and we are happy to host [the Secretary of State] here, not to the exclusion of any country, and if anyone wanted to attend they would just have had to say so [and] from my perspective, we would have done everything to ensure that they were present,” added Holness.

This article was originally published in the Jamaica Observer.