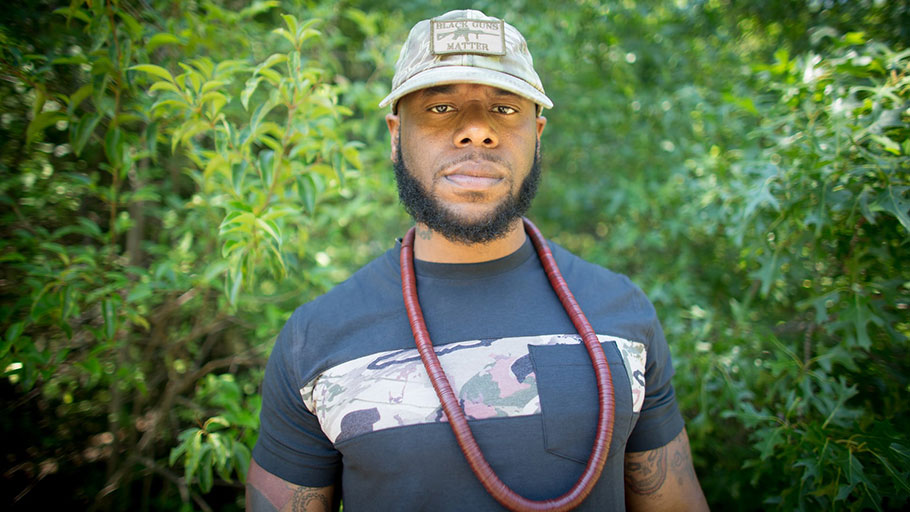 Rakem Balogun on being secretly watched by the FBI: ‘It’s tyranny at its finest.’ Photograph: Allison V Smith for the Guardian

Exclusive: Rakem Balogun spoke out against police brutality. Now he is believed to be the first prosecuted under a secretive US effort to track so-called ‘black identity extremists’

By Sam Levin, The Guardian —

Rakem Balogun thought he was dreaming when armed agents in tactical gear stormed his apartment. Startled awake by a large crash and officers screaming commands, he soon realized his nightmare was real, and he and his 15-year-old son were forced outside of their Dallas home, wearing only underwear.

Handcuffed and shaking in the cold wind, Balogun thought a misunderstanding must have led the FBI to his door on 12 December 2017. The father of three said he was shocked to later learn that agents investigating “domestic terrorism” had been monitoring him for years and were arresting him that day in part because of his Facebook posts criticizing police.

“It’s tyranny at its finest,” said Balogun, 34. “I have not been doing anything illegal for them to have surveillance on me. I have not hurt anyone or threatened anyone.”

Balogun spoke to the Guardian this week in his first interview since he was released from prison after five months locked up and denied bail while US attorneys tried and failed to prosecute him, accusing him of being a threat to law enforcement and an illegal gun owner.

Balogun, who lost his home and more while incarcerated, is believed to be the first person targeted and prosecuted under a secretive US surveillance effort to track so-called “black identity extremists”. In a leaked August 2017 report from the FBI’s Domestic Terrorism Analysis Unit, officials claimed that there had been a “resurgence in ideologically motivated, violent criminal activity” stemming from African Americans’ “perceptions of police brutality”.

The counter-terrorism assessment provided minimal data or evidence of threats against police, but discussed a few isolated incidents, notably the case of Micah Johnson who killed five officers in Texas. The report sparked backlash from civil rights groups and some Democrats, who feared the government would use the broad designation to prosecute activists and groups like Black Lives Matter.

Balogun, who was working full-time for an IT company when he was arrested, has long been an activist, co-founding Guerrilla Mainframe and the Huey P Newton Gun Club, two groups fighting police brutality and advocating for the rights of black gun owners. Some of the work included coordinating meals for the homeless, youth picnics and self-defense classes – but that’s not what interested the FBI. 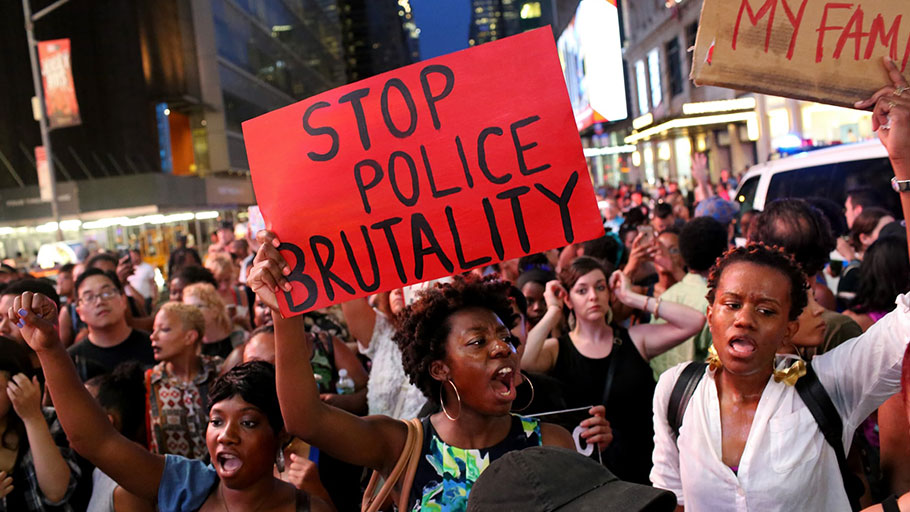 A march in the wake of the deaths of Alton Sterling and Philando Castile at police hands. Photograph by Yana Paskova, Getty Images

The FBI, Keighley said, learned of the protest from a video on Infowars, a far-right site run by the commentator Alex Jones, known for spreading false news and conspiracy theories.

The reference to Infowars stunned Balogun: “They’re using a conspiracy theorist video as a reason to justify their tyranny? That is a big insult.”

Keighley made no mention of Balogun’s specific actions at the rally, but noted the marchers’ anti-police statements, such as “oink oink bang bang” and “the only good pig is a pig that’s dead”. The agent also mentioned Balogun’s Facebook posts calling a murder suspect in a police officer’s death a “hero” and expressing “solidarity” with the man who killed officers in Texas when he posted: “They deserve what they got.”

This has been a nightmare for my entire family. It was like living like a dog confined to a small backyard

Keighley, however, later admitted the FBI had no evidence of Balogun making any specific threats about harming police.

At the time of his Facebook posts, Balogun said he was angry and “venting” about the high-profile cases of police killing innocent black men and women in America, including Alton Sterling and Philando Castile. He was particularly disgusted with the way the media and law enforcement officials portrayed the killings as justified and said that when he wrote those posts “I just mimicked their reactions to our killings.”

In a letter Balogun wrote to the Guardian from jail, he said he felt he had been “abducted” by the FBI, a “prisoner of war on free speech and the right to bear arms”. Authorities were targeting him for promoting black-led community groups and fighting “government abuse”, he wrote, adding he was never a threat to anyone: “Violence is the method of our oppressor, our method is hard work, love and unity.”

When he was arrested, police confiscated his .38-caliber handgun and an unloaded AK-style assault rifle – and also, he said, took his book Negroes with Guns by the civil rights leader Robert F Williams.

“They were really desperate,” Balogun said. “This is pretty much like Stalin 1950 – ‘You show me the man. I show you the crime.’”

The prosecution’s case eventually unraveled – but in the process, so did Balogun’s life.

The government’s own crime data has largely undermined the notion of a growing threat from a “black identity extremist” [BIE] movement, a term invented by law enforcement. In addition to an overall decline in police deaths, most individuals who shoot and kill officers are white men, and white supremacists have been responsible for nearly 75% of deadly extremist attacks since 2001.

The BIE surveillance and failed prosecution of Balogun, first reported by Foreign Policy, have drawn comparisons to the government’s discredited efforts to monitor and disrupt activists during the civil rights movement, particularly the FBI counterintelligence program called Cointelpro, which targeted Martin Luther King Jr, the NAACP and the Black Panther party. 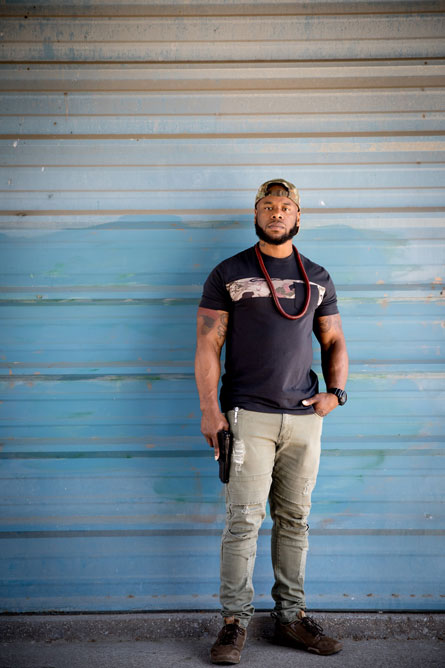 Rakem Balogun in his hometown of Dallas, Texas, days after being released from prison. Photograph by Allison V Smith for the Guardian

Michael German, a former FBI agent and fellow with the Brennan Center for Justice’s liberty and national security program, said the BIE assessment was “extraordinarily overbroad” and that the concept was spreading to law enforcement agencies across the US as more black activists were facing surveillance and police harassment.

Authorities have not publicly labeled Balogun a BIE, but their language in court resembled the warnings in the FBI’s file. German said the case also appeared to utilize a “disruption strategy” in which the FBI targets lower-level arrests and charges to interfere with suspects’ lives as the agency struggles to build terrorism cases.

“Sometimes when you couldn’t prove somebody was a terrorist, it’s because they weren’t a terrorist,” he said, adding that prosecutors’ argument that Balogun was too dangerous to be released on bail was “astonishing”.

“It seems this effort was designed to punish him for his political activity rather than actually solve any sort of security issue.”

The official one-count indictment against Balogun was illegal firearm possession, with prosecutors alleging he was prohibited from owning a gun due to a 2007 misdemeanor domestic assault case in Tennessee. But this month, a judge rejected the charge, saying the firearms law did not apply.

The US attorney’s office and the FBI declined to comment.

For Balogun, who said that the Tennessee case stemmed from a dispute with a girlfriend and that he was pressured to plead guilty to get out of jail, the decision felt like a “victory”.

But since his release one week ago, Balogun has also been forced to confront the harsh reality of life post-incarceration: he lost his vehicle, job and home; his son was forced to move and transfer schools and Balogun missed much of the first year of his newborn daughter’s life.

“This has been a nightmare for my entire family,” he said, adding that he was still recovering from the monotony and isolation of incarceration: “It was like living like a dog confined to a small backyard.”

Balogun said he also had to accept the fact that the government would probably continue to monitor to him and could seek new ways to disrupt his life. But the threat wouldn’t stop him from organizing and speaking out, he added: “As long as my community needs me to serve them, I’ll be there.”