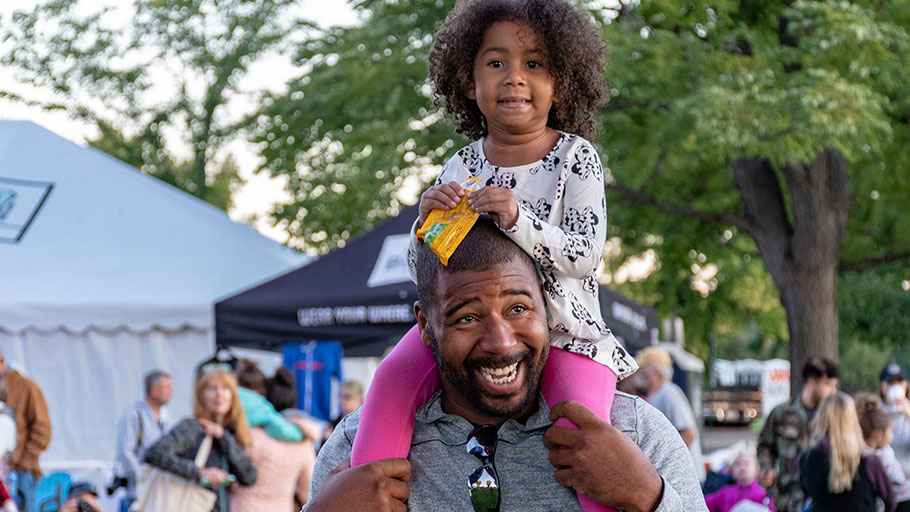 As Father’s Day approaches, the conversation among some Black fathers in the District has focused on how best to counter the barrage of messages that frame them as negligent, despite recent data that proves otherwise.

In the spirit of meeting that goal, upcoming community gatherings will serve as celebratory platforms to examine the social and emotional hurdles that many Black men have overcome in becoming a permanent fixture in their families.

For one such father, Antonio Beard, providing an example for his 5-year-old son and three older stepchildren has been his greatest achievement.

“I couldn’t allow what was happening with my son’s mother affect my situation with him,” said Beard, a Ward 7 resident and co-founder of the Lead by Example Foundation, co-sponsor of a Father’s Day Sip-and-Paint event taking place on Saturday afternoon at Fort Dupont Stoddert Community Center in Southeast, courtesy of ANC Commissioner Brittany Hughes (SMD 7F05). “Sometimes you both might not be the best fit, but your child should be your main focus.”

Beard said the pain of not having his father around compelled him to instill good values in and share special moments with his children, including morning pep talks, baseball games and trips to his job.

“One thing I learned is that you’re good as long as you spend time,” he said. ” It’s challenging, but something I like to do.”

Beard and other local fathers fit the profile of Black men highlighted in a 2013 study by the Centers for Disease Control and Prevention showing members of that demographic, whether in a nuclear family or as a co-parent, having more of a presence in the lives of their young ones, compared to their racial counterparts.

On Sunday, some of these fathers, stepfathers and grandfathers plan to take over the U Street corridor in a march against negative stereotypes during an event hosted by Kristi Love Events, DCity Smokehouse and We Act Radio.

Community advocates say that fallacies about Black male parenting often stem from a misunderstanding of social structures within Black communities that have been precipitated by mass incarceration. For instance, data shows that while 1.7 million Black men don’t live with their children, nearly 2.5 million Black men share the same address as their offspring, often cohabitating with their unmarried partner in what’s been called “shotgun pregnancies.”

During the last decade, that type of living arrangement surpassed shotgun marriages, according to data from the National Center for Health Statistics. In many cases, co-parents don’t legally marry, often making the term “single mother” synonymous with absent father, when that might not even be the case.

Since the turn of the century, organizations in the D.C. metropolitan area such as The 100 Fathers Inc. have taken the mantle in celebrating fathers and connecting upstanding Black men with children lacking a positive male presence.

Upcoming events such as the Fatherhood Legislative Summit at the Mayors Conference Center in Northwest on Friday, a field day at the Marvin Gaye Recreation Center on Saturday, and an award ceremony at Union Temple Baptist Church on Sunday build upon The 100 Fathers Inc.’s previous collaborations with the Nation of Islam and Alliance of Concerned Men to engage fatherless youth and show new fathers how to lead their home.

“Because we often didn’t advocate for ourselves, we had to take whatever was given to us as far as the societal look on fathers and Black men,” Franklyn Malone, CEO and president of The 100 Fathers, Inc., said in his indictment of governmental and nonprofit organizations he said haven’t straightened the record about Black fathers.

“People don’t know the real facts about Black fathers, or provided spaces or them to flourish,” said Malone, a father of four. “When you go on the Department of Health website, you don’t see fathers. We are part of the families. There’s very little mention of the father and that’s the problem.

“The family unit is the most important for the Black family,” he said. “We need to work together to save our children.”

For some Black fathers, saving their children and families requires a level of emotional availability they’ve been conditioned to suppress. Relationship experts say unresolved childhood trauma and misleading messages from family members, peers and family members about how to express Black masculinity hinders some Black men’s ability to form healthy, open relationships.

During its “Men Hurt Too Conference: Celebrating Men Survivor Stories” event, scheduled to take place Saturday afternoon at the Deanwood Community Center in Northeast, local nonprofit Domestic Violence Wear Many Tags (DVWMT) will feature Black men who overcame the shame of victimhood in abusive relationships with their mothers and significant others.

DVWMT founder QueenAfi said the event, part of Men’s Mental Health Awareness Month, will aid in attempts to broaden the conversation about domestic violence and allow Black men to share their feelings without pushback.

“A lot of men don’t know how to show their emotions,” QueenAfi said. “When they do, it comes off in a way that the other person might not understand. We have to start providing men a place to share their feelings. It’s something they truly need to be emotionally well. They must be able to share in a safe space without feeling judged.”

This article originally appeared in the Washington Informer.