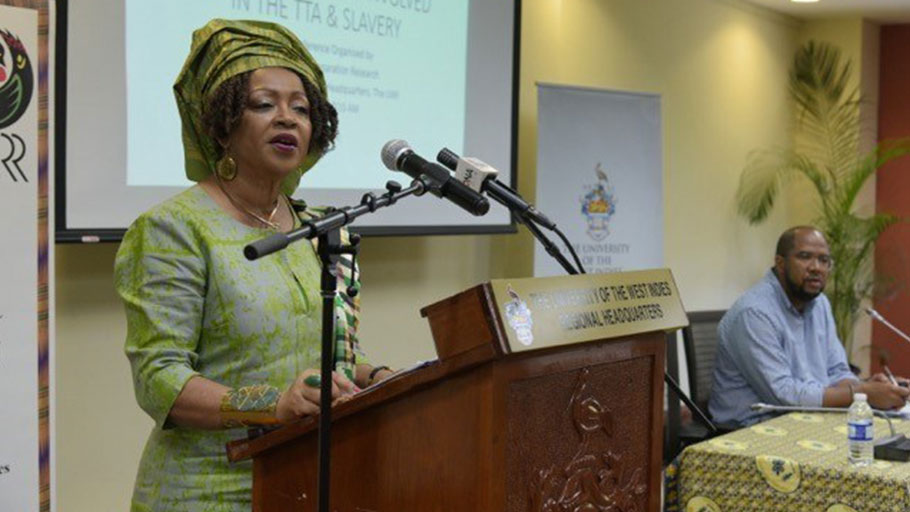 You Are Here: Home » Blog » Reparations » CARICOM Reparations Commission Expands List of Countries to be Targeted for Reparations

(Issued on behalf of the CARICOM Reparations Commission) This announcement was made by the Vice-Chair of the CARICOM Reparations Commission (CRC), Prof Verene Shepherd at a press conference held at the Regional Headquarters of The University of the West Indies (UWI) on June 10. She also revealed that the CRC was in the process of preparing a new round of letters of demand to be presented to additional countries identified as participants in the trafficking of enslaved Africans to the Caribbean. 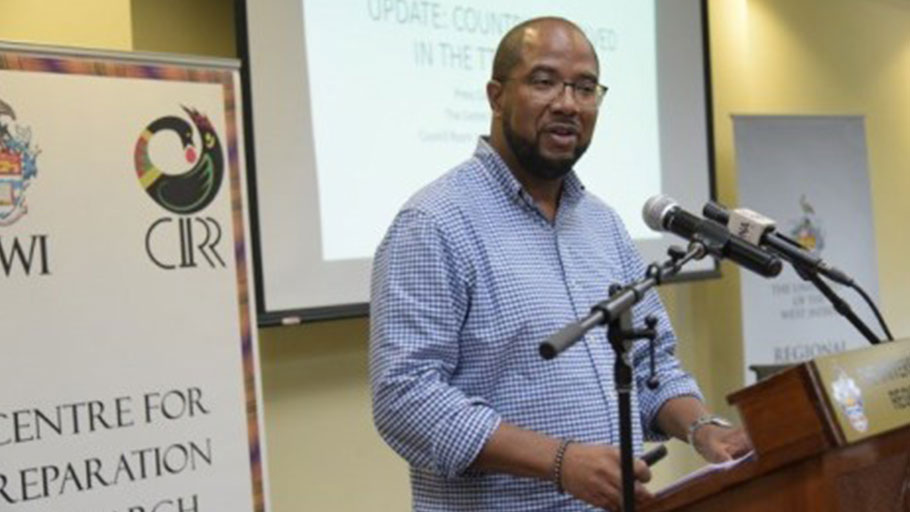 Dr. Ahmed Reid giving his presentation at the press conference.

The Press conference was called by the Centre for Reparation Research (CRR) at the UWI to share with the Caribbean public, findings from the 2018 expanded Slave Voyages Database created by Prof David Eltis and his team of researchers. This database 2.0 created in 1999 and updated in 2008 and 2018, has revealed 1,000 additional voyages undertaken by slavers from European states that were participants in one form or another in the trade in Africans to CARICOM member states and Cuba and or slavery. Among the less-publicised names are Sweden, Switzerland, Russia, Norway Hanse Towns Brandenburg and the Duchy of Courland (Latvia).

The Slave Voyages Database brings together the work of scholars over four decades and across five continents to track the movements of ships, their countries of origin and the numbers of people who were forcibly taken halfway across the world to the Caribbean. 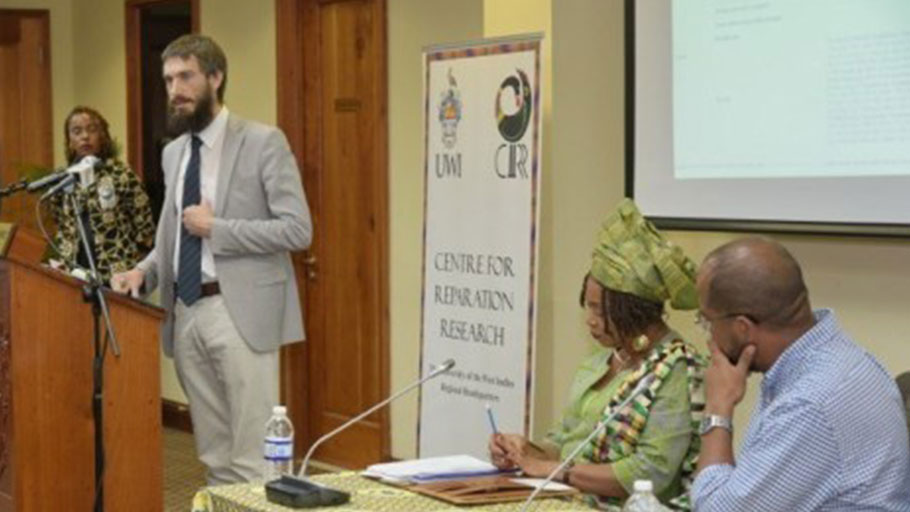 In a graphic and compelling presentation, CUNY historian Dr Ahmed Reid who is also Chair of the United Nations Working Group of Experts, introduced the latest 2018 findings, highlighting details of over 36,000 voyages between Africa and the Americas, as well as information on 11,400 voyages between the countries of the Caribbean and the Americas. It identifies colonial Kingston, Jamaica as a major trans-shipment port in the 19th century in the trafficking of enslaved Africans mainly to the Spanish Caribbean and reinforces the fact that the trafficking was a global enterprise.

Dr Reid’s presentation also identified the major players and their percentage participation in the trans-Atlantic trade in enslaved Africans; the total number of Africans that were captured and transported – numbering some 12.5 million and the mortality rate which, he said, was an average of 14%. Included in the expanded database are the names of over 92,000 Africans who were actually trafficked, identifying them by sex but more shockingly by ages that ranged from infants as young as a year old to men as old as 77 being captured, sold and relocated far away from their homeland. As Prof Shepherd reiterated, these names not only represent a digital memorial to the lives of the enslaved but personalizes the crime against humanity.

Among the recently revealed ‘less well-known countries’ highlighted in Dr Reid’s presentation, Russia came in for special attention. The records show an 1838 voyage by the vessel Goliubchick, flying the Russian flag departing the port of Odessa and landing in Matanzas, Cuba that same year with a cargo of 306 Africans who had survived the voyage from the original 340 who boarded. Mr Aleksel Alexeevich Sazonov, head of the consular section of the Russian embassy in Jamaica rose to the defense of his country and in a statement, questioned the completeness of the research and suggested that a vessel flying a country’s flag did not necessarily imply that the vessel actually originated in that country.

Prof Shepherd had earlier observed that as the database becomes more widely known, countries implicated will be engaged in denial and cautioned against too quick a denial as the Slave Voyages Database is an active research project.

Responding to the question of what was the next move and how these findings would be used, Prof Shepherd said the findings not only strengthens the case that CARICOM is building against involved and complicit States but also holds them accountable and makes them aware of their responsibility in ways they would never before have confronted. The new findings also enhance the CARICOM Reparations Commission’s work in carrying out the mandate given to it in 2013 by the Heads of Government of CARICOM Member States. In this regard, the Commission was in the process of writing a new round of letters of demand to be issued to complicit States including the new ones identified in the expanded database.