You Are Here: Home » News & Current Affairs » Chicago Is About to Offer the Nation’s First Reparations Program for Victims of Police Violence 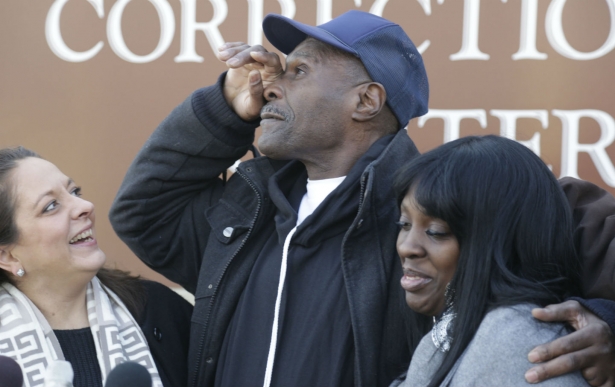 Stanley Wrice speaks with the media after being released from prison after claiming for decades that he was coerced into confessing to a rape by Lt. Jon Burge. (AP Photos/M. Spencer Green)

On November 2, 1983, Darrell Cannon found himself in the Chicago Police Department’s Area 2 headquarters with a shotgun barrel stuck in his mouth as a white officer yelled, “Blow that nigger’s head off!” The officer pulled the trigger, but no round was fired, so he pulled it again. But the shotgun wasn’t loaded; it was just one of the tactics that the three CPD officers present that day would use in trying to get a murder confession out of their suspect. Another was applying repeated electric shocks to his penis and testicles until he finally confessed to a murder that he didn’t commit. Cannon served a 24-year sentence and was exonerated after his release.

From 1972 to 1991, at least 110 African-American men experienced similar forms of torture at the hands of CPD commander Jon Burge and the detectives who reported to him. Like Cannon, many of these people were coerced into making false confessions; more than 20 are still in prison today for crimes they may not have committed.

Now, over 40 years after this torture began, the victims and their families may finally get justice for the CPD’s crimes: Chicago is poised to offer what appears to be the country’s first formal program of reparations for police violence.

A long, winding legal road led the city to its reparations proposal. Allegations of torture by the CPD began way back in 1982 but only gained official notice in 1987, as the state Supreme Court considered the appeal of Andrew Wilson, a convicted cop killer who received Burge’s shock treatments. Wilson, who was ultimately found guilty, later filed a civil suit over the torture. During the trial, Wilson’s attorneys at the People’s Law Office received anonymous letters in CPD envelopes naming more victims. The judge wouldn’t allow the letters into evidence, and Wilson’s suit dragged on until 1996. But the whistleblower letters sparked an investigation identifying more than 100 other victims. Several more civil suits followed.

In 2008, Burge was finally arrested on charges of perjury and obstruction of justice related to one of those suits. He was convicted two years later and served four and a half years in prison before being released in 2014. When Burge was convicted, more torture survivors wanted to pursue civil cases but could not, due to the statute of limitations on their alleged assaults. To many, justice had not been fully served.

For years, victim advocates campaigned without success for an official apology from the city. In 2013, Mayor Rahm Emanuel finally offered one, calling this history a stain on the city’s reputation. “But then we called for more than that,” says Flint Taylor, who represented Wilson and other victims at the People’s Law Office and negotiated the terms of the reparations ordinance with the city. “There should be reparations for people who didn’t have lawsuits.”

The People’s Law Office, along with a coalition of other lawyers, activists, families, and community organizers, created the Chicago Torture Justice Memorials (CTJM) and wrote the first draft of an ordinance to provide those reparations. It was the brain child of attorney Stan Willis and his group Black People Against Police Torture, which is no longer in existence. In October 2013, Aldermen Howard Brookins and Joey Moreno introduced it to the City Council, where it failed to get a committee hearing or garner the mayor’s explicit backing for more than a year. But in March, with Emanuel facing a tight reelection campaign, the mayor signaled his support. The city finally presented a renegotiated version of the ordinance to the City Council on April 15. “The national context for this was absolutely critical,” says Martha Biondi, chair of the African-American studies department at Northwestern University and part of the negotiating committee. “The struggle for the reparations ordinance became the heart of the Black Lives Matter movement locally in Chicago.”

The ordinance consists of three overarching components: public recognition of the torture, including memorials; recovery services for victims and their families, including job placement, mental-health counseling, and free tuition to city colleges; and a $5.5 million fund for financial reparations. It will also require that Chicago public schools teach the history of Burge’s torture regime in eighth and 10th grades.

Originally, the ordinance called for a $20 million fund. The city and the negotiating team agreed to lower that number based on an estimate that just 50 to 65 people will be eligible to apply, rather than the initial estimate of more than 100. The remaining victims are either deceased or still eligible to pursue civil suits. “For me, the reparations ordinance is a great example of what is possible when people fight together,” says Mariame Kaba, a prison-abolition activist and founding director of Project Nia. “It models what we should be doing for people who are victimized. We need to be providing [health services]—and we need to memorialize these kinds of things.”

Kaba and other local organizers also credit the protests that have kept police violence in the headlines since Michael Brown’s death. “Less and less are people under illusions that police killings and brutality occur in isolated incidents by ‘bad cops,’” says Aislinn Sol, an organizer for Chicago Black Lives Matter. “This increasing mass sentiment is what forced Rahm to [support] the ordinance now.”

On May 6, the reparations ordinance will come before the City Council for a vote. It already has the support of 27 of the 50 aldermen. If passed, it will take years for the benefits to come into full effect, and victim advocates say this isn’t the end of their fight. They note that Burge is still collecting a $54,000 pension from the city, among other issues they want addressed. But as more and more videos of police killing black people emerge around the country, there’s hope among this city’s reformers that justice can in fact be served—not just in Chicago, but everywhere.