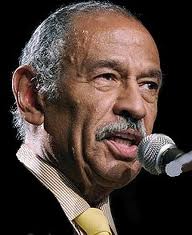 U.S. Rep. John Conyers Jr. said he will re-introduce in the 113th Congress legislation that calls for a seven-member commission to study reparations for African Americans.

“It is the most important piece of legislation I have ever introduced, and I will re-introduce HR40 in the 113th Congress,” Conyers (D., Mich.) told the 400 attendees at the “Revitalizing The Reparations Movement” conference on Saturday at Chicago State University. The 113th Congress first met Jan. 3, 2013.

He made his comments in the wake of 14 Caribbean nations demanding reparations and apology from Britain and other European countries for the trans-Atlantic slave trade. If the countries fail to negotiate with the Caribbean nations, they will sue them in the World Court, which is located in The Hague, The Netherlands. Thus far, Sweden is the only country that has indicated a willingness to negotiate reparations.

Conyers said the actions by the Caribbean nations will revitalize the reparations movement in the United States. “I think it is going to be a springboard for reparations,” he said.

Conyers first introduced the legislation, titled “Commission to Study Reparation Proposals for African Americans Act,” in 1989 during the 101th Congress. The bill was referred to the House Judiciary Committee, where Conyers is the ranking member.

The eight-page piece of legislation, which was co-introduced by U.S. Rep. Bobby Scott (D., Va.), said the 4 million Africans and their descendants were enslaved in the United States and colonies that became the United States from 1619 to 1865.  The government sanctioned slavery from 1789 through 1865, enabling it to flourish. At the same time, it deprived Africans of life, liberty, citizenship rights, and their cultural heritage. In addition, slavery denied
them the fruits of their own labor.

The Commission to Study Reparation Proposals for African Americans Act would study the lingering negative effects of slavery and discrimination and recommend appropriate remedies in consideration of the Commission’s findings.  In addition, the Commission would examine defacto discrimination against freed slaves and their descendants from the end of the Civil War to the present, including economic, political, and social discrimination.

The Commission will hold hearings and submit a written report.

Conyers said he wants to hold hearings in Washington, D.C., about reparations for African Americans.”If the Republican Congress blocks the hearings, I will hold them throughout the country,” he said.