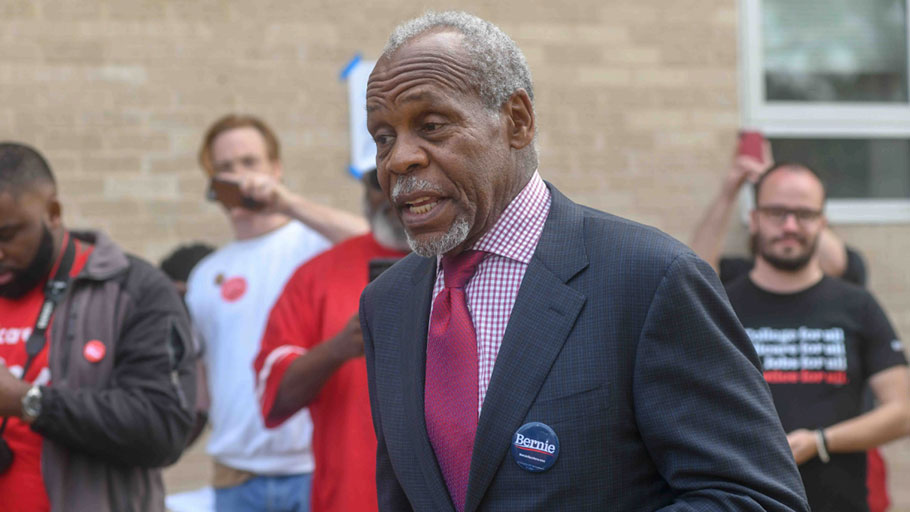 By Luke Ramseth and Justin Vicory —

Actor and director Danny Glover visited churches and pumped up attendees of a get-out-the-vote event in Jackson on Sunday as he rallied support for Sen. Bernie Sanders’ presidential bid.

“This is about a transformation,” Glover told about 30 volunteers gathered at Callaway High School in North Jackson on Sunday, discussing Sanders’ Medicare-for-all proposal, his Thurgood Marshall education plan and his pitch to eliminate college student debt.

“We’re in a fight, and we knew it was going to be a fight,” the star of the “Lethal Weapon” movie franchise said.

Sanders, of Vermont, had been scheduled to visit Jackson himself for a Friday rally ahead of the Tuesday primary. But he opted to campaign in Michigan instead, which also votes Tuesday and is seen as a crucial state in his effort to beat former Vice President Joe Biden for the Democratic nomination.

Speaking at At New Mt. Zion Missionary Baptist Church on Sunday morning, Glover, 73, apologized for Sanders’ schedule change, saying “he tried to do everything he could to make it down here.”

Biden has easily won other Southern states with nominating contests so far. He spoke at a Jackson church service Sunday morning and hosted a rally at Tougaloo College along with the actress Vivica A. Fox and and former Massachusetts Gov. Deval Patrick

Glover visited several Jackson churches Sunday morning, before motivating Sanders volunteers who had gathered to knock on doors with a short afternoon speech.

“I believe in (Sanders’) platform and our responsibility to do the right thing,” Glover said at New Mt. Zion. “To vote for the kind of change, transformative change, that we need at this moment. No one steps in front of us and tells the truth like Bernie Sanders.”

Lumumba said he felt Sanders’ platform — including a focus on rebuilding infrastructure, eliminating college student loan debt and a Medicare-for-all national health care plan — would benefit Jackson and its residents.

Sanders was the national Democratic front-runner in recent weeks following nominating contests in Iowa, New Hampshire and Nevada, but Biden surged after winning nearly half the votes cast in the South Carolina primary.

At the canvassing event, Glover touted his work alongside Sanders to try to unionize Nissan workers in Mississippi in recent years. And in motivating volunteers who were preparing to knock on doors in North Jackson, he drew comparisons between Sanders’ policy proposals and the Civil Rights movement.

“Mississippi has always been the ground zero,” Glover said. “Young students came down here, and started organizing people to vote, it was where they began to talk about voter’s rights.”

Glover said Sanders’ policies should appeal to African American voters, and they have garnered support from younger black voters. But he acknowledged Biden’s continued strength with older African Americans.

”I think there’s some history they have with Biden, that they have to Obama,” he said. “We can’t discount that at all. I think there is somewhere where the message hasn’t penetrated, the way we would have wanted it to. But there are so many maybes.”

Moderate candidates such as South Bend, Indiana, Mayor Pete Buttigieg and Minnesota Sen. Amy Klobuchar dropped out and endorsed Biden, leading to a strong showing by Biden on Super Tuesday. After disappointing showings, billionaire Mike Bloomberg and Massachusetts Sen. Elizabeth Warren also dropped out, paving the way for a two-man race between Biden and Sanders.

For candidates to receive any delegates — the key to winning the Democratic nomination — they need to receive at least 15% of the vote.

As a smaller state, Mississippi has relatively few delegates, but Biden has a chance to nab all 36 of them if Sanders performs worse than he did in 2016. That year, former Secretary of State Hillary Clinton won more than 82% of the vote. Sanders got about 17%.

Madison resident Dana Maxwell, 51, attended the Jackson canvassing event for Sanders with her son, Hudson, who was wearing a red shirt that said, “Medicare for y’all.” She has volunteered for months by sending text messages to voters in support of Sanders, but it was her first time knocking on doors, joining several other first-timers at the event.

“I feel optimistic,” Maxwell said of Sanders’ chances against Biden in Mississippi. “The South is difficult, it’s such a Republican-controlled area. It’s hard, but you look at Bernie’s record — he came down and fought for the union at Nissan. Biden wasn’t here for that. Bernie voted against the crime bill, NAFTA, and (he supports) Medicare for all.”

This article was originally published by the Clarion Ledger.