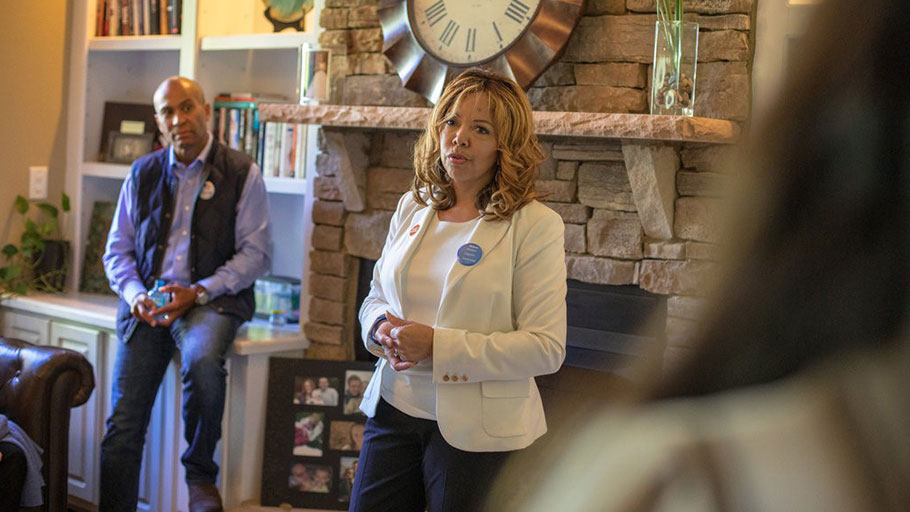 Lucy McBath speaking to a group of supporters in Atlanta early this month. Photo: Lynsey Weatherspoon, The New York Times

ALPHARETTA, Ga. — An air of solemnity hangs over Lucy McBath’s bid for Congress.

It is present in her campaign stump speech, when she recounts the 2012 murder of her son, Jordan Davis, a black teenager who was shot and killed by a white man at a gas station when the 17-year-old refused to lower the volume of the rap music playing in his car.

It is present in her interactions with voters in Georgia’s Sixth Congressional District, who often greet Ms. McBath with weary eyes and deep condolences before discussing policy issues like health care or asking for the requisite candidate selfie.

“What I’m doing today is still mothering his legacy,” Ms. McBath said at a meet-and-greet event in this Atlanta suburb. “I’m extending what I would do for my son to my community.”

Voters listening to Ms. McBath remark on how different she is from other politicians — how quiet the room gets when she talks, how personal her stories are.

“You feel for her as a mother,” said Cheryl Brown, 60, who for years before meeting Ms. McBath, kept a Jet Magazine cover featuring Jordan Davis at her Atlanta-area home. The cover read, “Is Your Child Next?,” and it resonated with Ms. Brown because she, too, fears her black son could fall victim to racist violence.

More than anyone else running for Congress, Ms. McBath, the Democratic nominee in a Republican-leaning race, is redefining social justice in politics this year, in large part through her deep personal connection to the Black Lives Matter movement. Yet she is also far from the only candidate this election cycle to explicitly discuss issues of racial injustice and violence against minorities.

Many Democratic candidates across the country, after years of tiptoeing around issues of race out of fear of alienating white voters, are slowly adopting the language of anti-racist activists. It is an attempt to connect more closely with black voters, in particular, whose turnout will be key in several of November’s most hotly contested midterm elections. Republicans have poured money into advertisements that lambaste Democrats on that move, casting their evolution as a sign of a corroding culture that’s too politically correct.

A new advertisement from the National Republican Campaign Committee about who “owns” the Democratic Party, for instance, begins with an image of Colin Kaepernick, the former N.F.L. quarterback who knelt during the national anthem to protest police brutality. 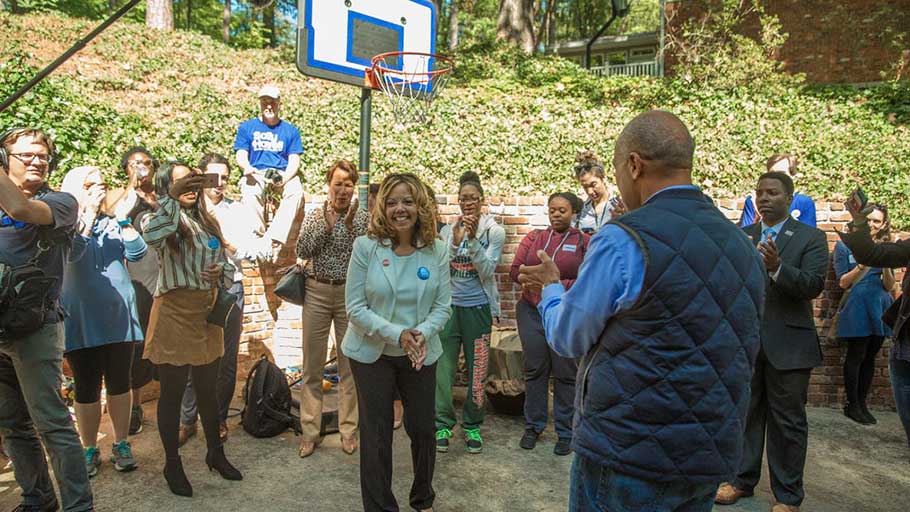 It is a clash that is playing out repeatedly in critical races from Maine to Texas. Observers said such explicit appeals to racial politics are a sign of how cultural fights and political ones have fused in contemporary politics, especially in the era of President Trump and several high-profile police killings of young black people such as Botham Jean in Dallas, who was killed in his own apartment in September.

Ms. Brown’s husband, a 59-year-old attorney named Mark Brown, said he considered his vote for Ms. McBath to be a rebuke against those who have “caricatured the Black Lives Matter movement.”

“This isn’t kids protesting in the street with signs,” he said. “This is a middle-aged black woman talking about her lived experience.”

Republicans are locked into the moment, too, but from the opposite direction.

Fueled by Mr. Trump’s attacks on protesting N.F.L. players like Mr. Kaepernick and the president’s dismissals of any discussion of police brutality as anti-police, Republicans have raced to mimic his language.

Senator Ted Cruz, locked in a re-election battle in Texas, in August unveiled a television advertisement touting his pledge to stand for the national anthem. Other Republicans in tough races have run similar ads, like Brian Kemp, the party’s nominee for governor of Georgia, and Marsha Blackburn, the Tennessee Senate candidate.

Representative Bruce Poliquin, a Maine Republican who is in a highly competitive fight for re-election this fall, immediately called for residents to boycott Nike on his campaign Facebook page in September after Mr. Kaepernick became the face of the shoe company’s recent “Just Do It” marketing campaign.

In Wisconsin’s First Congressional District, also considered a key race, Republicans recently attacked the Democratic nominee, Randy Bryce, for once tweeting “when the police become the terrorists” in response to a local report about police misuse of power.

In a television advertisement released in September, Republicans deployed Mr. Bryce’s brother, a police officer, as a spokesman. He argued the tweet is a reason to vote for his brother’s opponent.

“When people refer to police officers as ‘terrorists,’ that hits a little too close to home,” said James Bryce, as the tweet flashed across the screen. “I don’t want to be represented by someone who has shown contempt for law enforcement.”

Mr. Trump, to big applause, alludes to Mr. Kaepernick’s protest at almost every campaign rally. During a recent stop in Minnesota’s 1st Congressional District, where the Democratic nominee, Dan Feehan, had previously expressed support for Mr. Kaepernick’s protests, the crowd erupted when Mr. Trump said, “We’re proud to stand for our national anthem.”

Mr. Feehan is an Iraq War veteran but in an increasingly conservative portion of the state, which stretches across Minnesota’s southern border. It is one of the few seats election experts think could flip from Democrats to Republicans this November, and Republicans see the line of attack as especially potent.

On the Democratic side, some candidates have tried to make explicit appeals to racial justice to inspire new voters. Mandela Barnes, the party’s candidate for Wisconsin lieutenant governor, donned Mr. Kaepernick’s jersey while on the campaign trail, and had a Twitter row with Gov. Scott Walker, a Republican, regarding the same issue. Representative Beto O’Rourke of Texas, trying to unseat Mr. Cruz, went viral with his speech to black audiences regarding the death of Mr. Jean, who was killed in his apartment after an off-duty police officer said she mistook him for a burglar.

Even in fights among Democrats, Ayanna Pressley, the Boston city councilor who defeated incumbent Representative Michael Capuano, used her support of Mr. Kaepernick’s protests to draw a rare point of daylight between herself and Mr. Capuano. She was battling to represent Massachusetts’ only congressional district with a majority of nonwhite voters, and some in the city believe the issue helped push Ms. Pressley over the top.

“Both in terms of issues and platforms, any candidate that claims to be progressive cannot have a viable campaign without centering issues of racial and economic justice,” said Janaé Bonsu, the recently named co-director for Black Youth Project 100, one of the main activist groups born out of the Black Lives Matter movement.

Carol Anderson, a professor of African-American studies at Emory University in Georgia, pointed to previous examples of how grass-roots movements about racial justice have long had an electoral impact, sometimes unintended. In the 1960s and ’70s, for example, the Democratic Party’s embrace of civil rights legislation led to Richard Nixon’s “Southern Strategy,” which helped Republican conservatives dominate the South for decades. 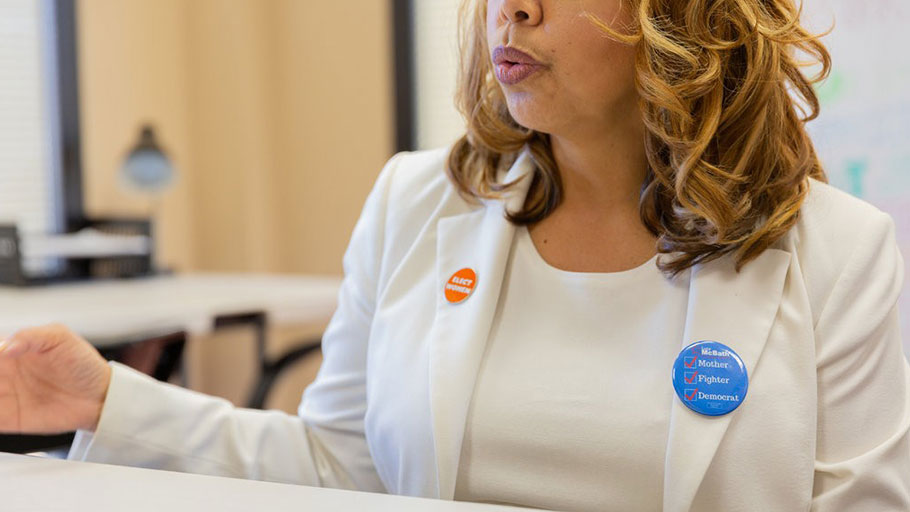 Professor Anderson said scholars may come to see the Black Lives Matter movement as a similarly transformative political moment, which realigned the rhetoric of both political parties and their candidates for years to come.

“For those who are dealing with worrying that their babies are going to be shot by cops, that movement gave voice to that angst,” Ms. Anderson said. “But I think for the Republicans, what it did is it provided another target for them to continue to troll in racism.”

Republicans push back against that characterization of racial bias. In interviews, conservative political operatives said their party’s willingness to attack Democrats on issues such as standing for the national anthem or supporting the police does not come from a place of bigotry, but an attempt to point out what they characterize as Democrat extremism.

Even those who denounced the lines of attack on moral grounds, like Republican strategist Evan Siegfried, said it could be effective.

“A sizable portion of America and the Trump base feel that the country isn’t what it used to be and that patriotism is under assault,” said Mr. Siegfried. “It successfully preys on the feeling that America has become a strange, if not foreign, place that no longer reflects their values.”

Ms. McBath remains an underdog running against the Republican incumbent, Karen Handel. However, the National Republican Congressional Committee announced a round of television advertisements supporting Ms. Handel this week, a sign that Republican officials think the race may be tightening in its final weeks.

In an interview, Ms. McBath stressed that she was not a single-issue candidate, but it was nevertheless important for her to acknowledge that her son’s murder, and the political activism that followed, was her entry point into politics.

“At the end of the day, whatever you think about me; whatever happens or whatever I become in the future, I’ll still always be Jordan’s mom,” Ms. McBath said.

Placing her son’s death at the center of her political messaging has made the campaign more special, Ms. McBath said, but will also make election night more viscerally personal.

“I’m risking my son’s legacy for the people of this district,” she said, wearing a button that outlined the three titles she hopes will propel her to Congress: “Democrat. Fighter. Mother.”