Every state is a battleground

You Are Here: Home » News & Current Affairs » Every state is a battleground 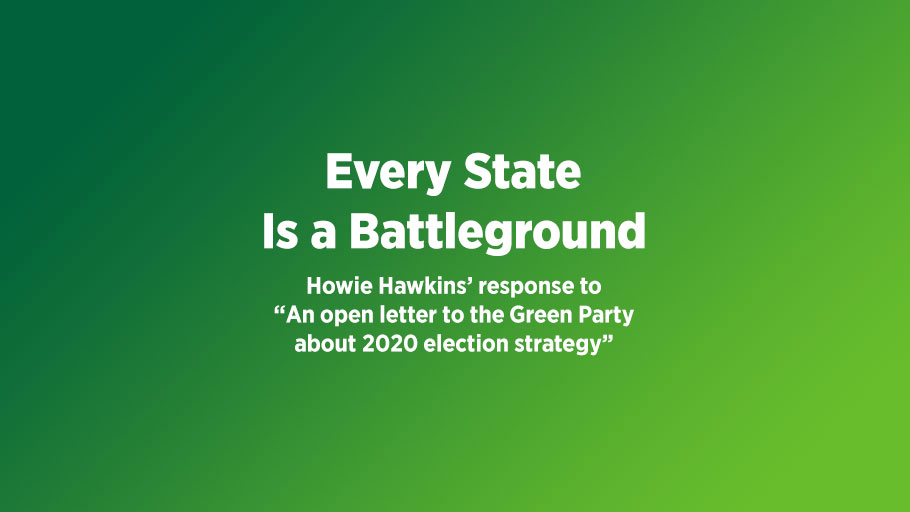 For the Greens, every state is a battleground. No state is safe. Greens in every state want a presidential candidate who campaigns in their states in support of their local candidates and causes. Greens in every state are fighting Democrats every day on fracking, oil and gas pipelines, single-payer, school privatization, living wages, police brutality, bloated military budgets and forever wars, and the Greens’ very right to appear on ballots. In fighting escalating rents, gentrification, displacement, and homelessness, Greens find local Democrats are thick as thieves with their banker and real estate developer campaign donors, as Trump himself was with the Democratic machine New York City before he ran for president. Of course, the Greens are fighting the Republicans on these issues, too.

The Left Can’t Outsource Fighting the Right to the Democrats

The signers say Greens “refuse to recognize the special danger of Trump” and that Greens say there is “no difference between Democrats and Republicans.”

I did not say any of that in my article, or in 2016, or ever. In my view, Trump’s racism, corruption, and narcissistic sociopathy make him not just a man with bad policies, but a bad man as well. He was the greater evil compared to Clinton. He’s a greater evil than previous Republican presidents. He is an ever present danger right now in office.

What is different about Trump from previous Republicans is his vicious public scapegoating, which has given permission to institutional gatekeepers to increase covert discrimination and to white nationalists to inflict slurs, vandalism, and violence against immigrants, people of color, Muslims, Jews, LGBTQ people, and women.

Recognizing the danger of Trump does not mean that electing any damned Democrat should trump all other considerations. The Democrats might beat Trump, but they won’t beat Trumpism because they have enabled it. In office the Democrats join the Republicans to support the basic policies that the capitalist class cares about: neoliberal economic austerity at home and neoconservative imperialism abroad. The Democrats should have crushed Trump in a landslide in 2016 because the hard right Republicans he reflects are a shrinking political minority in the US. But they lost to Trump because most working people didn’t vote at all since Clinton personified their corporate bosses who disrespect and mistreat them.

One difference among the Democrats is that the corporate wing will not return the favor of support that Sanders has given to them by pledging to support to any Democratic nominee. Obama has made it known that he opposes a Sanders nomination. Clinton recently refused very publicly to say she would support Sanders if he is the nominee. The signers of this Open Letter have bigger problems inside the Democratic Party than they do with the Greens.

The signers note that I say in my article that “Greens want to get Trump out as much as anybody.” Then they ask “how can that be if Greens would vote for a Green candidate, and not for Sanders, Warren, or any Democrat in a contested state knowing that doing so could mean Trump’s victory.”

That can be because there are stronger ways to fight Trump than depending on the Democrats. Trump is dangerous now. The Democrats should have impeached him long ago. Trump was committing crimes in plain sight from the moment he took office. He also should have been impeached for corrupt self-enriching emoluments, nepotism, campaign finance felonies, racist policies and provocations that incited violence, atrocities against migrants at the borders, war crimes, gutting federal regulations and agencies, and constant obstructions of justice.

Instead, the Democrats have belatedly chosen to go small instead of big by impeaching him just on the Ukraine extortion scheme and cover-up, as if all his other crimes are acceptable. Instead of beating Trump up politically on multiple grounds for a protracted period of time, the Democrats have given Trump a short Senate trial peppered with militaristic messaging in support of the US proxy war with Russia in Ukraine. The Democrats short, narrow, and often jingoistic impeachment trial fails to show the people how Trump’s crimes hurt them as workers, consumers, minorities, and women, undermined peace, and harmed the environment.

That is typical for how the Democrats enable Trumpism. Democratic support for bipartisan militarism abroad enabled Trump to successfully appeal to voters who want to end the endless wars, although that was a big lie by Trump. Decades-long Democratic support for pro-corporate economic policies has created the growing economic inequality and insecurity that are the social conditions in which Trump and the Republicans have been able to expand their base among downwardly-mobile whites with racist, xenophobic, and mysogynist scapegoating. The previous Democratic administration refused to prosecute the corporate criminals who stole 14 million homes or the war criminals who tortured people. The Democrats left them walking free and they walked right into the Trump administration. For details on that, see my article, “The Rich White Man’s Justice System Protects Trump and His Cronies.”

The Democrats have helped to normalize Trump by joining with him to overwhelming support military budget increases, the US Mexico Canada Trade Agreement (NAFTA 2.0), and the prosecution of Julian Assange and persecution of Chelsea Manning.

The left is more powerful when it makes its demands independently of either pro-corporate, pro-war party. Instead of depending on the soft-right Democrats to fight the hard-right Republicans, the most effective way to fight the right is to build an independent left movement and party with its own program, actions, and candidates. Instead of futilely begging the politicians of the lesser evil between the two capitalist parties to say and do the right things, the left should speak to the public for itself and build its own independent power.

The signers claim “Voting Green in the swing states is a feel-good activity (‘vote your hopes, not your fears’) as if fear of climate disaster, for example, shouldn’t be a motivator for political action.”

Greens are not political dilettantes who cast votes just to feel good. We vote to make politicians meet our demands if they want our votes. We vote to show people who agree with our demands that they are not alone. We don’t waste our votes affirming Democrats like Clinton who exemplified the elite consensus for the neoliberal economics and neoconservative imperialism that has given us unabated global warming, growing economic insecurity, and endless wars. We used our vote for Jill Stein to demand a Green New Deal, improved Medicare for All, a job guarantee, student debt relief, ending US military aggression, and fair elections.

The climate crisis is a prime reason why Greens don’t support Democrats. The last Democratic administration’s “all of the above” energy policy was a euphemism for fracking the hell out of the country. Obama still brags about how the US became the world’s largest oil and gas producer under his administration. Clinton had her delegates to the Democratic Platform Committee vote against all the climate policies proposed by the Sanders campaign. The one Sanders plank that was adopted was later reversed by the Democratic National Committee in August 2018 when it re-committed the party to taking fossil fuel industry money and went back on the record for the “all of the above” energy policy, the language that Sanders got removed from the 2016 Democratic platform. Trump calls climate change a hoax, but the Democrats act as if it is a hoax.

Yes, let’s be realistic. The Democrats are not going to bring us Medicare for All, a Green New Deal, or deep cuts in the war budget. Progressive Democrats are allowed to make speeches. But the corporate Democrats make the decisions.

One would think that after the last two Republican presidents first assumed office after losing the popular vote that the Democrats would move to abolish the Electoral College. But no, it is only the Green Party that is campaigning for a national popular vote for president using ranked-choice voting. Ranked-choice voting would eliminate the spoiler problem that the safe states strategists are so worried about.

The Open Letter makes a couple of other assertions about the Green Party that are simply wrong.

It asks rhetorically, “Weren’t more potential Green Party members and voters driven off by the party’s dismissal of the dangers of Trump than were inspired by it?”

The Open Letter also asks rhetorically, “Weren’t the Greens in the late ’80s and early ’90s winning elections to city councils and other local offices across the country, consistent with a grass roots strategy, though for much of the past 20 years, they’ve largely abandoned local and state contests, devoting nearly all their attention to increasingly harmful races for president?”

Not true again. In the ‘80s and ‘90s, the number of Green candidates each year grew from handfuls in the late ‘80s to around 100 in even years in the ’90s. Since Ralph Nader’s campaign in 2000, the Greens have run hundreds of candidates every year and won 30%-40% of their local races each year. 130 Greens currently hold elected office.

The presidential campaigns have been helpful to state and local parties in securing the 21 state ballot lines the Green Party currently has. These campaigns also helped locals to recruit people to the party for local and state politics. But by far the most Green time and money has gone into local politics.

My purpose in seeking the Green Party nomination for president is to urge and assist the Green Party to qualify for more state ballots and to use those ballot lines to elect thousands of local candidates as we move into the 2020s to municipal and county and soon state and congressional offices. The strategy is to build an independent movement and party for ecosocialism from the bottom up into a major party in American politics.

We are running out of time to address the life-or-death issues of the climate crisis, the nuclear arms race, and the growing economic inequality that has become a survival issue for working people whose life expectancies are now declining in this country. We don’t have time to march in place with a safe states strategy to elect a lesser evil Democrat. If the Democrats again give us a dismal choice between a corporate Democrat and Trump, and lose again because they cannot get their natural base out to vote for them, it will be their fault, not the Greens’.

Howie Hawkins is a retired Teamster in Syracuse, New York. A co-founder of the US Green Party, he was the first US candidate to campaign for a Green New Deal in a run for governor of New York in 2010. He is currently seeking the Green nomination for president.