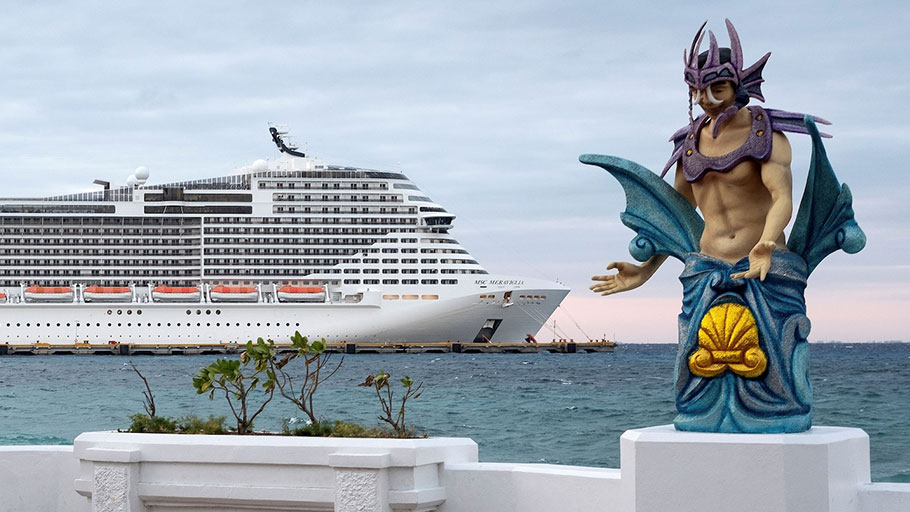 Far from the coronavirus epicenter, Caribbean tourism starts to get sick

You Are Here: Home » Blog » News & Current Affairs » Far from the coronavirus epicenter, Caribbean tourism starts to get sick

The MSC Meraviglia docked off Cozumel, Mexico, last month after Jamaica and the Cayman Islands barred it from entering over concerns of a crew member with flu-like symptoms. (Florent Serfari/Reuters).

Cruise passenger numbers are down and hotel guest numbers have begun to dip. The islands are bracing for worse.

Ocho Rios, Jamaica — A Bob Marley tune played as the scent of jerk chicken wafted through a half-empty market in this normally bustling port town.

A few dozen tourists milled about — far fewer than normal but more than last week, when new health and safety measures imposed by the government led two giant cruise ships to turn away.

“It affects us real bad,” said Norma Wilson, 53, proprietor of the Dandy Family Restaurant. “We never got no customers. I’m too worried because I have bills I have to pay.”

The economic fallout of the novel coronavirus, declared a pandemic Wednesday by the World Health Organization, is slamming the infection epicenters of Asia and Europe. But from oil producers in the Middle East to hotels and restaurateurs here in the Caribbean, a fast-spreading ripple effect is engulfing even those far-flung corners of the globe that have yet to confirm many cases of the coronavirus.

The cruise-heavy and visitor-dependent Caribbean is faring significantly better than other tourism hot spots. Cruise passenger traffic on some islands is down by the tens of thousands. But guest numbers at hotels and resorts, far larger generators of local revenue, are dipping less or holding steady — albeit with serious signs of trouble ahead. The islands are in the final weeks of high season and counting their blessings that the virus did not strike earlier.

Yet even on these coconut-laden shores, far from Wuhan or Milan, tourism in a sudden era of social distancing is facing an escalating challenge — with the impact of a global outbreak threatening to derail the recovery of a region hammered in recent years by a run of earthquakes and killer storms.

The latest blow: a State Department advisory this week bluntly warning U.S. citizens to avoid cruise ships. That came as some nations, including Jamaica as well as Antigua and Barbuda, had already begun putting public health before the almighty dollar, refusing entry to cruise liners and charter flights carrying sick passengers or those from countries with high indexes of the virus.

“Real GDP growth for the Caribbean was supposed to be 3.7 percent this year, but I think you need to kiss those growth projections goodbye,” said Scott MacDonald, chief economist for the Caribbean at Smith’s Research and Gradings.

“Maybe 2 percent, maybe lower,” he said. “It’s hard to quantify this yet. If you get hermetically sealed countries, then that’s going to be a really big blow for the Caribbean.” 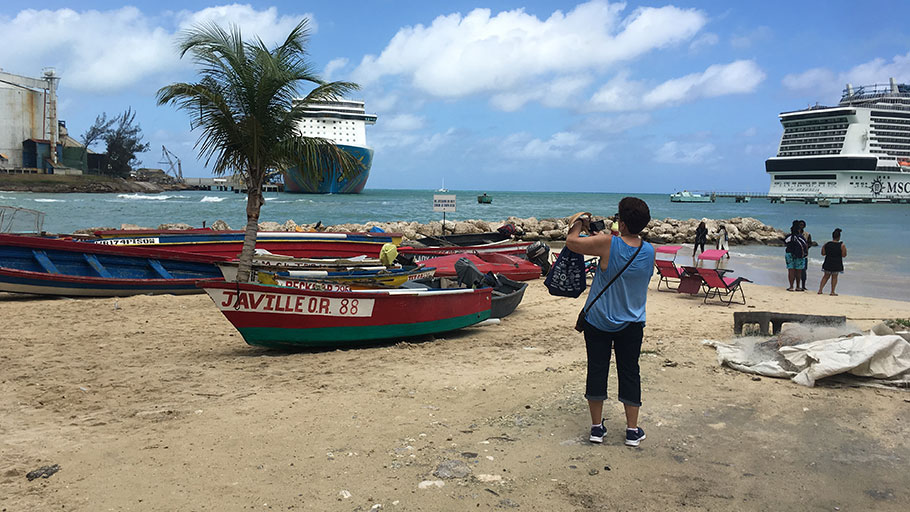 Jamaican Tourism Minister Edmund Bartlett said this island nation has lost roughly 50,000 cruise ship passengers in recent weeks — a $4 million blow to the economy. Concern now is that such losses could magnify in the coming weeks here and in other parts of the Caribbean, where some hoteliers are reporting significant drops in advance bookings.

Rob Barrett, chairman of Elite Island Resorts, which has eight properties and 2,000 hotel rooms on Barbados, St. Lucia and Antigua and in Panama, said the dip in March arrivals thus far has been minor — about 2 or 3 percent. But those declines could steepen sharply. Advance reservations for the next four months, he said, have fallen by 50 percent.

Cancellations and postponements are largely coming from guests 45 and older. Millennials apparently are far more willing to travel.

“Overall arrivals could be hit by 15 percent his year,” Barrett said, “and that’s catastrophic for our business, given our low margins. We’re in a much more fragile situation in the Caribbean because we don’t have the safety nets you have in the U.S., where the government can lower payroll taxes or offer low-interest loans in bad times.”

One silver lining: The steepest drops so far have been in cruise passenger numbers, the day-trip visitors who are far less economically important to Caribbean economies than destination travelers who spend at least one night in a hotel. Cruise passengers account for 75 percent of foreign visitors to the Bahamas, for example, but only 11 percent of overall tourist spending.

Fewer cruise ship passengers have been arriving at Nassau, the capital, in recent weeks. Yet for local merchants, those losses have been offset to some extent by guests at hotels such as the Baha Mar resort, one of the biggest in the Bahamas. It has seen only a “slight” decrease in its upcoming bookings and is still anticipating brisk business during spring break and Easter, according to Robert Sands, the resort’s senior vice president of government and external affairs.

Nevertheless, Bahamian officials, who are still trying to rebuild after Hurricane Dorian ripped through the northern Abaco and Grand Bahama islands last year, are warning of a virus-related hit to tourism and have asked Bahamians to vacation domestically this year to limit the predicted losses.

“Given the fact that 5.4 million foreign visitors came to the Bahamas by cruise last year, it doesn’t take a genius to conclude that this is going to have some impact, said Bahamian Tourism Minister Dionisio D’Aguilar. 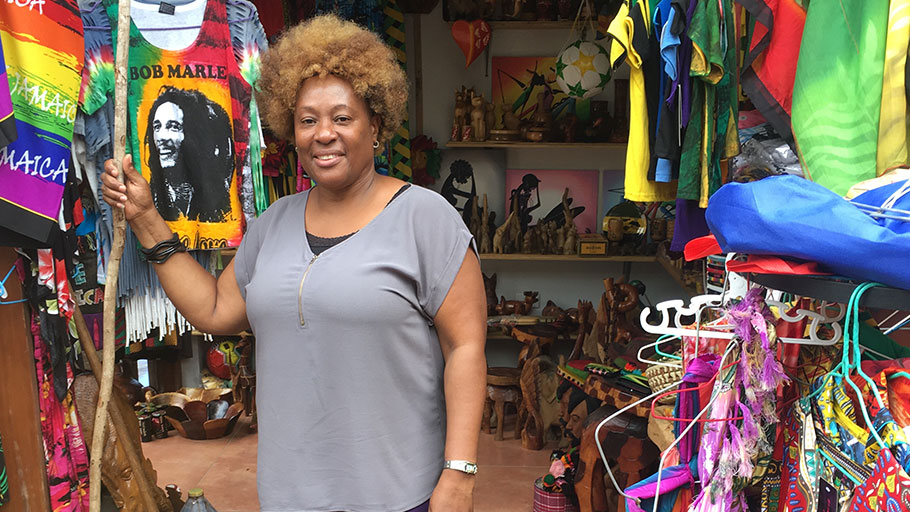 Verona Addison, 54, at her shop, Tucker Save-a-Dollar Craft and Gift Shop, in Ocho Rios. (Kate Chappell for The Washington Post).

Barbuda, one of the islands that makes up the nation of Antigua and Barbuda, was devastated by Hurricane Irma in 2017. Now officials are bracing for another blow from the coronavirus. Like many islands in the Caribbean, Barbuda is facing a delicate balance between economics and public health.

Officials have turned away three cruise ships because passengers had flu-like symptoms. “The cruise ships don’t have tests, and it’s going to be a week or so before our first tests arrive,” Tourism Minister Charles Fernandez said. “We are very concerned about people arriving to Antigua from affected areas.”

The nation’s economy is the second-most dependent on cruise passengers in the Caribbean, at 4.1 percent of gross domestic product, according to the industry publication Skift. But Fernandez worries more about bigger-spending destination travelers. A weekly charter flight from Italy has been suspended. Hotels have developed plans to move any sick guests to distant rooms. But cancellations are starting to trickle in.

“Undoubtedly it’s going to get even more serious and acute,” Fernandez said. “The hotels and airlines are waving the change fees . . . and our hope is that people will reschedule and come back when this whole situation normalizes.”

In Jamaica, Bartlett has told Parliament the tourism sector will lose an estimated $564 million as a direct result of the virus. Tourism accounts for 11 percent of Jamaica’s GDP.

Jamaica this week confirmed its first two cases of the coronavirus — a British national who arrived on March 4 and, on Wednesday, a U.S. employee who had traveled to the United Kingdom. The government has banned travel to and from China, Iran, South Korea, Italy and Singapore and suspended flights from Spain, France and Germany. The Dominican Republic has confirmed five cases, bringing the Caribbean total to seven.

The Canadian government this week said a passenger on the MS Braemar, which docked in Port Royal near the Jamaican capital of Kingston, had tested positive for the virus. It is not known whether she disembarked. Thirty-two people were being quarantined after travel to affected regions, health officials said.

The economic fallout has hit Jamaica’s jungle-themed Mystic Mountain. Managing Director Mike Drakulich said 35 percent of its business is cruise-related. He estimates he has lost up to 1,000 customers to date.

“Attractions like myself are looking at staffing, expenses, payables, receivables,” he said.

Prem Mahtani, chief operating officer of the cruise port duty-free shop Jewels and Time, said 60 percent of its business comes from cruise ships. Sales at one location dropped by half last week. The other was shuttered.

“My first feeling was that government is probably not as sensitive to our concerns with the cruise ships,” he said. “But they have a lot to protect with the virus, so it’s delicate.

“I don’t see how this is not going to be devastating.”

This article was originally published by the Washington Post.