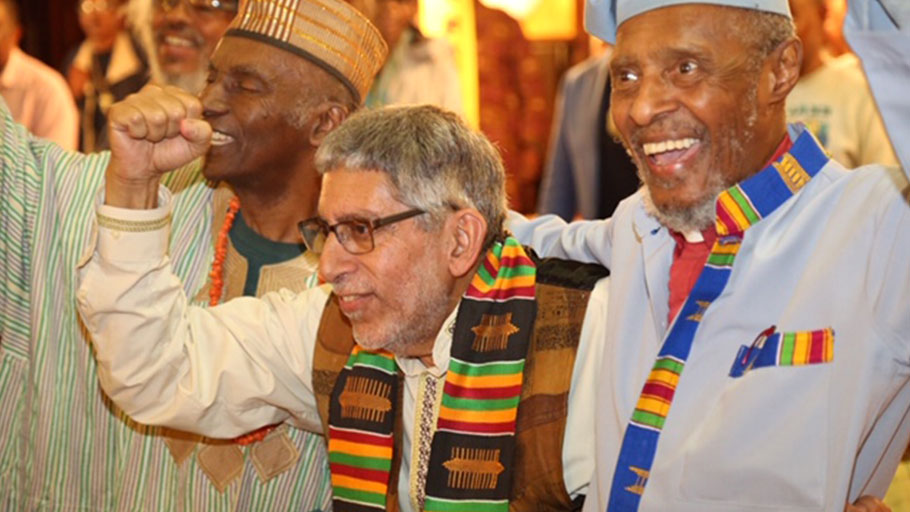 From far and wide, comrades of Don Rojas came with passages of praise for the ailing journalist, who was defined by many as a freedom fighter. Rojas, diagnosed with bone cancer and undergoing debilitating treatment, must have felt some comfort with the outpouring of love and genuine respect from a coterie of renowned speakers last Saturday evening at the House of the Lord Church in Brooklyn.

Among those who ventured from abroad were Mirielle Fanon Mendes-France, the daughter of the legendary Frantz Fanon; Ambassador Inga Rhonda King from St. Vincent and the Grenadines with a message from Prime Minister Dr. Ralph Gonsalves; and Sir Hilary Beckles, Vice-Chancellor and President of the University of West Indies (UWI), and the keynote speaker.

Beckles, with whom Rojas worked as the Director of Communications at UWI, compared Rojas to Marcus Garvey, given his extensive travel and connections with the African Diaspora. “Don has built bridges connecting the Caribbean, Africa, and the United States,” he said. He cited him as an indispensable colleague and a genius in the realm of communication.

Speaker after speaker found different ways to highlight Rojas’s long and distinguished career as a journalist and activist. “Don has had a way of transitioning the revolution into building institutions,” said Assemblyman Charles Barron, who presented Rojas with a citation from the NY State Assembly.

Several of Rojas friends and associates from the Caribbean and elsewhere could not attend but like the author Ta-Nehisi Coates, rapper/poet Talib Kweli, Dr. Verene Shepherd, and Danny Glover, sent warm revolutionary greetings. Rojas’ commitment to the struggle for reparations and liberation in the Caribbean was cited by David Abdullah and David Commisiong, and Yvette Modestin noted the respect he had achieved among Afro-descendants in Latin and Central America. “For us, he is like family,” she remarked.

Family, friends and colleagues of Don Rojas launched a GoFundme campaign to assist Don in raising the resources required to fight a rare and aggressive form of bone cancer. Please support this campaign by clicking here

The evening that stretched well beyond the allotted three hours, included musical interludes from Ahmed Abdullah and his ensemble, a processional led by percussionist Neil Clarke, libations performed by Sister Shadidi Beatrice Kinsey, and a spirited recounting of the ongoing GoFundMe fundraising campaign by Nkechi Taifa. It was a challenging task for moderator Dr. Ron Daniels, who along with an actively engaged support committee planned the affair, but he moved it along as best he could with such formidable voices as Rev. Herbert Daughtry and his wife, Dr. Karen Daughtry, Adeyemi Bandele, Dr. Brenda Greene, and Dr. Ben Chavis, in their own special ways citing Rojas’ litany of achievements.

And of course there were the journalists, many of whom had worked and traveled with Rojas on ventures to Africa, Haiti and parts of the U.S. Dr. Todd Burroughs recalled several personal memories of Rojas’s generosity and tutelage and Milton Allimadi, publisher of the Black Star Press, reminded Rojas of their trip to the Western Sahara.

Before the family was invited to the podium, Dan Coughlin spoke of his time with Rojas after hiring him as general manager at WBAI and how he empowered the station and inspired the staff—“and raised $4 million in a short period of time,” he added.

But it was left to the family to provide the packed audience with intimate reflections on Rojas the father and husband that was done extensively by the eldest son, Maceo, whose narrative of the turmoil the family faced in the throes of the turbulence in Grenada in 1983. He vividly regaled listeners and those who watched the livestream with dramatic moments when his father’s life was at stake. It was a riveting account that has the makings of a thrilling book. And the letter he read from his sister, Kecia, and the comments from his brother, Mauricio (who read a letter from, Katerina, their youngest sister) and his mother Karen would be significant chapters to complete the family’s saga during those life-threatening days.

Equally troubling for the family is the fight the patriarch is enduring with his battle against myeloma, a form of bone cancer. The disease has taken its toll on Rojas’ normally robust physical stamina, but in his lengthy speech replete with his typical anti-capitalist, anti-imperialist, and unwavering stance for the dispossessed, he was the Don Rojas his comrades knew very well.

“Over the years he has fought for us and now it’s time for us to fight for him,” said Fanon Mendes-France, and as the young man said from Free Speech TV, where Rojas once oversaw, “we won’t give up the fight!”

“It is our Revolutionary Duty to Support Revolutionaries who have
spent their lives supporting the struggle for African liberation and the
quest for justice for all oppressed people.”