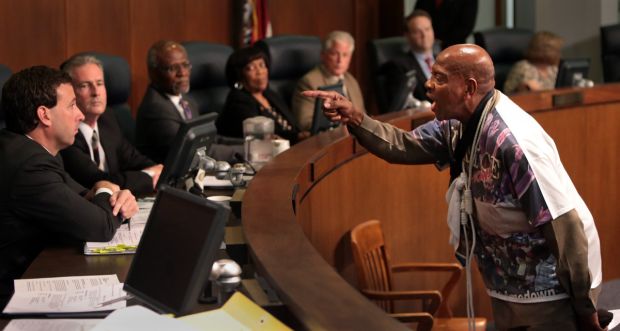 By Steve Giegerich and Tim O’Neil

The fury of Ferguson descended on the seat of St. Louis County with a vengeance Tuesday night with demonstrators unleashing a torrent of chants, invective and threats at a County Council that listened for two hours in stunned silence.

Protesters demanded the arrest of Darren Wilson, the police officer who shot 18-year-old Michael Brown to death on a Ferguson street five weeks ago, the removal of County Prosecutor Robert McCulloch from the Brown case, the resignations of County Police Chief Jon Belmar and Ferguson Police Chief Thomas Jackson and accountability from the elected county legislative arm.

Ferguson protesters in “Hands Up, Don’t Shoot” pose, voice concerns at a meeting of the St. Louis County Council on Tuesday, Sept. 16, 2014. Others attending Tuesday’s meeting spoke on the zoning of the subdivision of Suson Hills. Photo by Robert Cohen, rcohen@post-dispatch.com

But the bulk of the ire was directed at Steve Stenger, the 6th District Democratic councilman facing Republican state Rep. Rick Stream in the November general election in the race for county executive.

“We will do everything in our power on election day because we see you sitting there with a smug look on your face,” one speaker told Stenger. “We will have our say in November when we go to vote.”

Stenger was shouted down before he could complete a statement asking that the community work together to “bridge the divide.”

He could not be reached for comment on the demonstrators’ demands following the raucous, packed meeting that carried over into the hallway outside the council chambers and then to North Central Avenue outside.

Council Chairwoman Hazel Erby twice threatened to end the meeting prematurely if the demonstrators — who interrupted speakers, including eight residents appealing to the council on zoning and other matters — didn’t cease.

“You are ISIS to black people,” one speaker told council members.

Ferguson protesters chant as they leave the chambers of the St. Louis County Council after speaking on Tuesday, Sept. 16, 2014 in Clayton. Photo by Robert Cohen, rcohen@post-dispatch.com

The audience jeered a woman who voiced support for the police. She received a police escort from the building after the meeting.

Speakers also threatened to shut down St. Louis Cardinals and Rams games this Sunday, disrupt weekend grocery shopping trips throughout the area and mount massive demonstrations if the Cardinals reach the World Series.

Lastly, came the foreshadowing of further violence if Wilson is not charged and convicted.

“If Darren Wilson gets off, you all better bring every army you all have got. ’Cause it’s going down,” said one speaker.

The protesters marched out of the council chamber chanting and holding their hands up. At 8:12 p.m., activist Anthony Shahid — who had repeatedly referred to Stenger as “boy” — gathered them in the lobby outside for 4½ minutes of silence, to commemorate the 4½ hours that Brown’s body lay in the street.

“What you just felt, 4½ minutes, think what the family felt for 4½ hours,” Shahid said.

The next 35 minutes were filled with loud chanting of the slogans that have been hallmarks of the protests “No justice, no peace… hey hey, ho ho, killer cops have got to go… We’re marching all night long… hands up, don’t shoot.”

Protesters then marched noisily around the building escalators several times, then went down one flight and out onto Central Avenue, where the chanting continued for about half an hour. About 50 people marched two blocks in front of the county police headquarters, then headed toward the Justice Center, where McCulloch works, but stopped before a small cluster of Clayton police officers across Central and Carondelet avenues.

A few protesters screamed at the officers, who stood with little movement.

Zaki Baruti, another protest leader, said they planned no action in Clayton today “except to call Stenger’s office and find out his decision.”