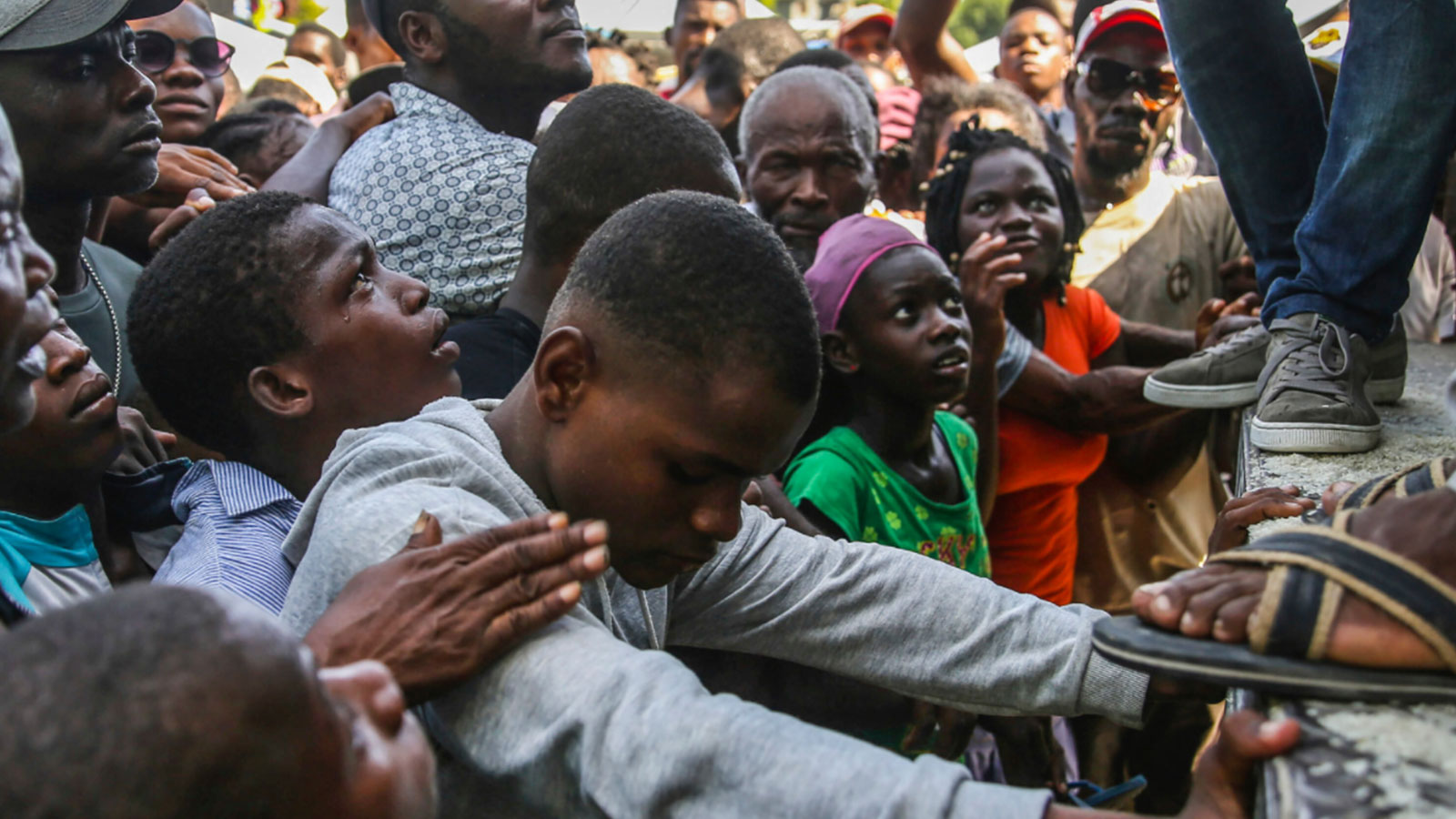 Haiti quake destroyed many churches, shredding a mainstay of support

“We are the only thing here,” said a cleric in Les Cayes, one of the cities worst hit by the quake. In some towns, not a church was left standing.

PORT-AU-PRINCE, Haiti — The houses collapsed, the hospitals were damaged, the roads buckled or turned impassable. But it was the earthquake’s destruction of churches across Haiti’s southern peninsula that may prove the biggest gut punch to the roughly 1.5 million people affected.

For many Haitians, their only source of aid throughout their lives, in the absence of strong government institutions, has been the church, a part of Haiti’s landscape since the era of European colonialism and slavery.

Many churches lay in ruins after the 7.2 magnitude earthquake on Saturday morning, which wrecked thousands of buildings and left entire towns and at least one city without a church left standing. On Monday, as heavy rains threatened floods and mudslides in the region, civil defense officials raised the death toll to more than 1,400 and said nearly 7,000 people had been injured.

In the city of Les Cayes, which was particularly devastated by the quake, clerics despaired even as they sought to project hope and resolve to rebuild.

“We are the only thing here,” said the Rev. Yves Joel Jacqueline, 44, who works at cathedral in Les Cayes with Haiti’s cardinal, Bishop Chibly Langlois, who was hurt in the quake. “There is no support from the government.”

The heavy concrete rooftops and domes of churches across the southern peninsula are now caved in, tabernacles crooked or buried under rubble, walls marbled with deep cracks.

Every church seen by reporters from The New York Times in a 15-mile drive in and around Les Cayes on Sunday was completely destroyed or severely damaged. The cathedral in the city of Jeremie, an architectural landmark built more than a century ago, was left in ruins.

The quake could not have come at a worse time for Haiti. The Caribbean nation is still traumatized over the unsolved July 7 assassination of President Jovenel Moïse and is still recovering from the calamitous quake that destroyed much of the Port-au-Prince area in 2010, which destroyed the capital’s cathedral, its ruins now an ominous feature in the capital’s skyline.

Severe poverty, systematic gang violence, the pandemic and a history of dysfunctional government have only worsened the struggles of Haiti’s 11 million people.

Those struggles have reinforced the importance of the church as a source of aid, education and stability for much of the country, which has no other social safety net. French slave owners made Catholicism Haiti’s official religion, but it endured even after the slave revolt and Haitian independence, a faith Haitians are deeply bound to.

“Our church is destroyed and many churches in and around Les Cayes are destroyed, but we have faith and we know that as long as people are still here, we can build back our community,” said Father Jacqueline. 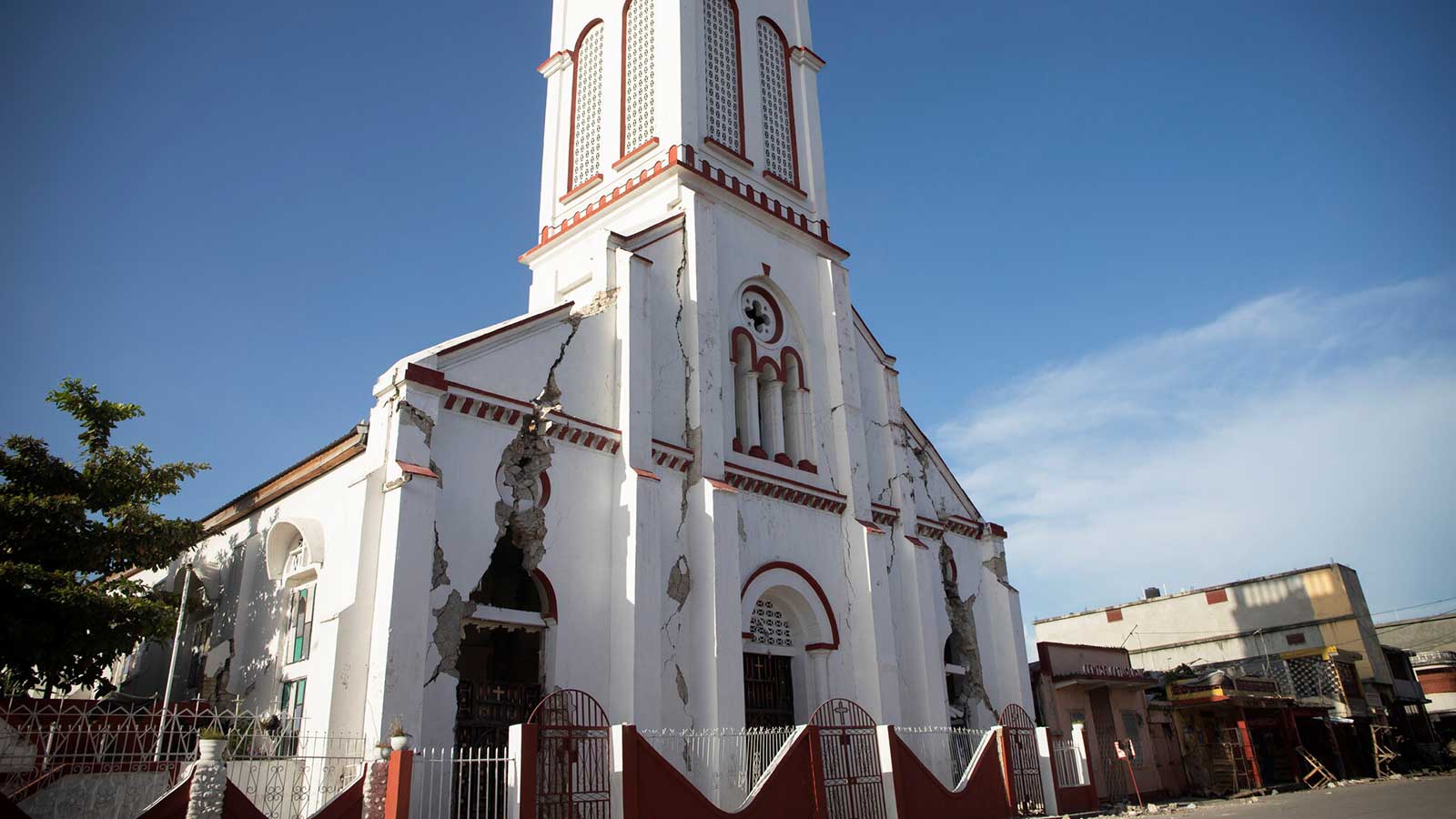 It is hard to overstate the influence of Christianity on Hispaniola, the island split by Haiti in the west and the Dominican Republic in the east. Roman Catholicism played a pivotal role because of the European missionaries who brought it with them in the 1500s.

The Dioceses of Santo Domingo and Concepcion de la Vega were founded on Hispaniola in 1511, less than two decades after the colony of Santo Domingo was established by the Spanish. Catholicism became the official religion of Haiti from 1697 after the French took over the Western half of the island, turning it into a slave colony. It remained the official religion until 1985.

But Haiti, as the world’s first Black independent nation, took Catholic rituals and melded them with local customs, creating a faith unique to the nation that many find pride in.

Churches became a major feature of communities across the country, places to gather, seek refuge and get food and education. These needs only intensified as the country — once the wealthiest in the Caribbean — slipped into poverty over the last 100 years. Foreign interference from the United States, which invaded and supported political coups and dictatorships, deepened the despair.

Religious charities are playing a prominent role in the mobilization of help for the quake victims. Catholic Relief Services, for example, said Sunday it had dispatched teams to Les Cayes and the surrounding area to provide clean water, sanitation, shelter and emergency supplies. Catholic Charities of the Archdiocese of Miami, a major community of the Haitian diaspora, said it was accepting donations for quake relief.

But the rollout of aid has been slow, partly reflecting the Haitian government’s own inabilities to oversee and coordinate it, an echo of the problems following the 2010 quake. Prime Minister Ariel Henry of Haiti promised a “tenfold” increase in the aid effort in a Twitter posting on Monday, but he has little power to make that happen.

Mr. Henry’s public promise also was belied by his private frustration about the sluggish response so far, expressed to the American ambassador, Michele J. Sison, and conveyed in an internal State Department update shared with The New York Times.

Underscoring how cash-strapped and helpless his own government is in the face of the disaster, Mr. Henry has been surveying the damage using a plane lent to him by the Dominican Republic, with that nation’s name plastered on the side of the aircraft. 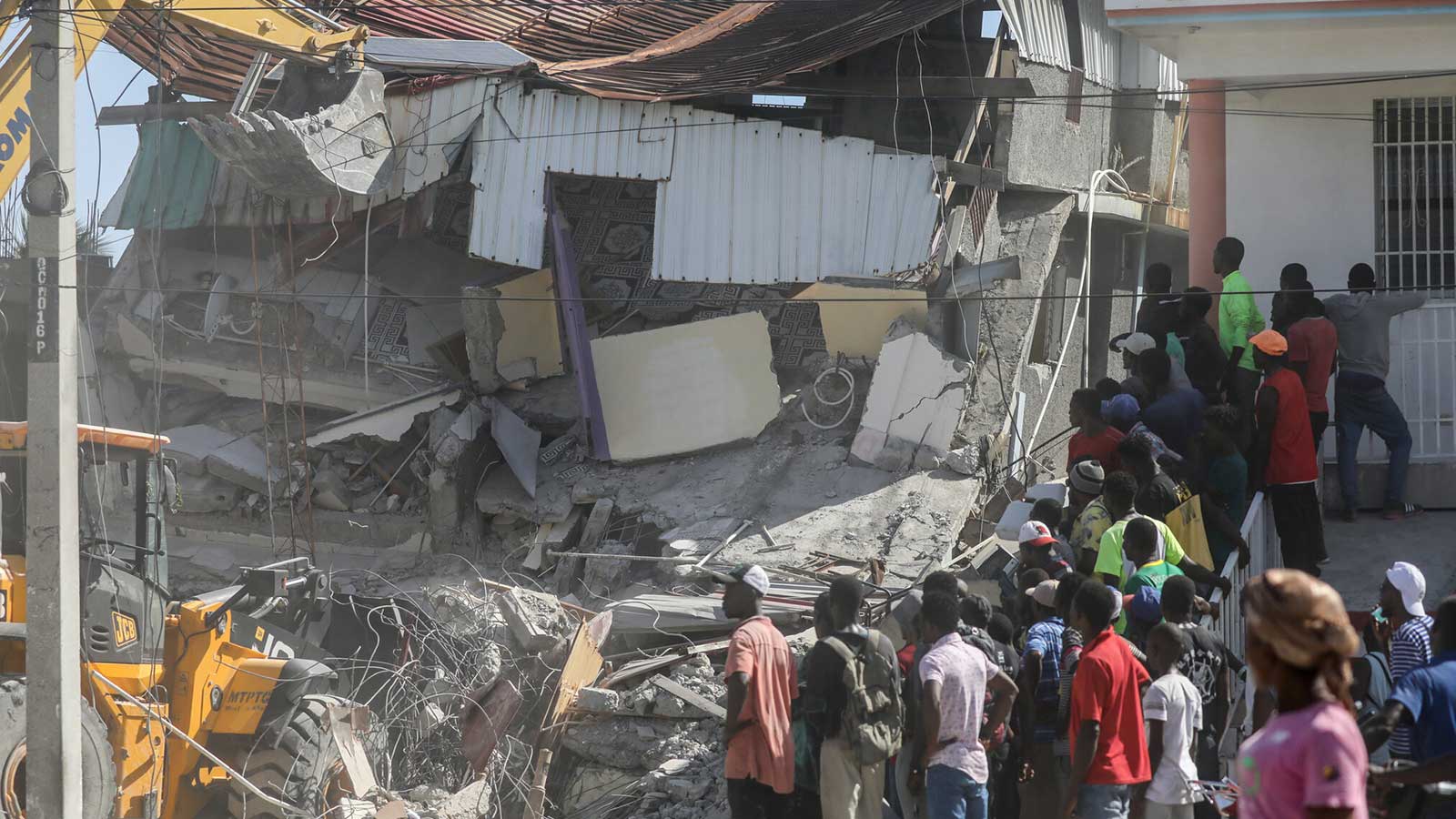 The homes of as many as 1.5 million Haitians across the southern peninsula may be structurally damaged, according to another internal United States government assessment.

The need to expedite help intensified as Tropical Depression Grace threatened Haiti and other Caribbean countries. The storm, which made landfall in Haiti on Monday, could dump enough heavy rain to cause mudslides and flooding in the quake zone, where hundreds of thousands of survivors are sleeping in the open.

Officials interviewed in and around Les Cayes worried that the storm could bring disease and hunger, as the strong gusts of wind and rainfall further complicate and delay relief efforts.

In an interview on Sunday, Father Jacqueline stood atop the rubble of his church and leaned on a gnarled set of red and white radio towers that collapsed at the building’s entrance, printouts of a past Christmas program strewn across the ground.

The priest had shared the residence with Haiti’s cardinal. Both men escaped the building as they were having breakfast, but a disabled priest who was eating with them and two women who tended to the residence were killed.

“The church has suffered from the situation in Haiti, from the kidnapping, the uncertainty and then the coronavirus,” said Father Jacqueline, referring to the widespread gang violence across Haiti that has not spared religious institutions, with thugs kidnapping priests and nuns for ransom.

A crew of men used their hands and sledgehammers to extract what they could from his destroyed residence, including sensitive church documents, while trying to keep at bay men on the street who wanted to take what they could, anything that remained intact from the destruction. 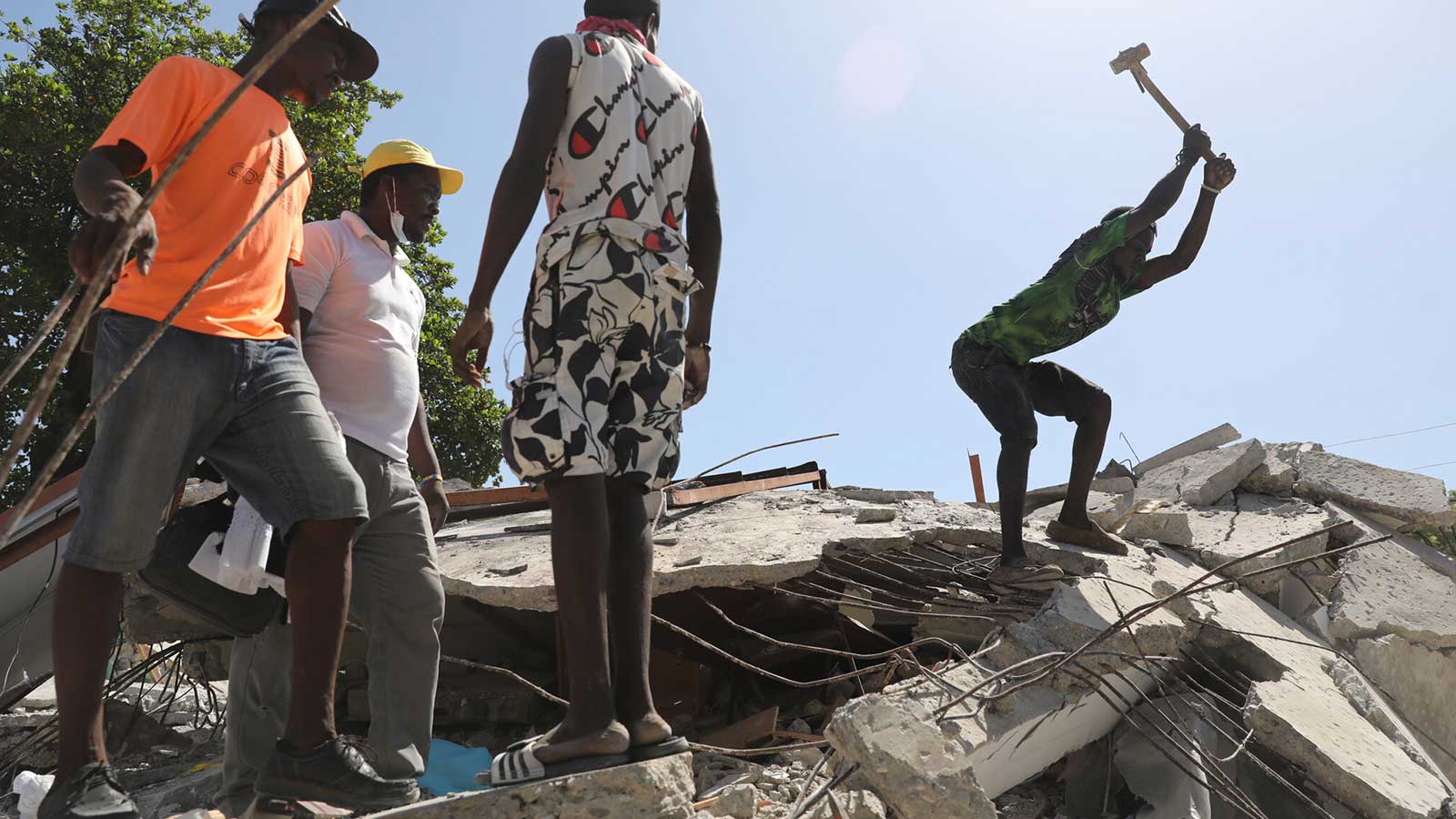 Joseph Jean Fetal, right, using a sledgehammer to break concrete slabs in an attempt to retrieve important documents from a damaged church in Les Cayes on Sunday. (Valerie Baeriswyl for The New York Times)

The mayor of Les Cayes, Marie Michelle Sylvie Rameau, said in an interview that there was a lack of potable water across the city and people were digging wells to quench their thirst with water that may be contaminated and spread disease.

Aid efforts on Monday were complicated by road blocks on a main thoroughfare linking the capital to the southern peninsula, Ms. Rameau added. Although the gangs that control that road declared a humanitarian truce over the weekend, the local population — unaffected by the quake but still desperately poor — erected checkpoints to loot convoys of aid, cutting off a vital transportation line for relief agencies.

Local officials fear that as the population grows more desperate, they will begin to seize what they can, with not even the church spared.

The only government help his church has received so far, Father Jacqueline added, was taking away the body of his colleague, the dead priest.