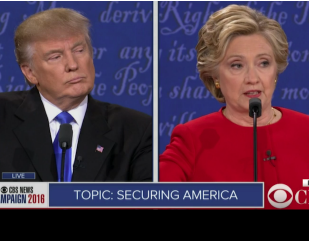 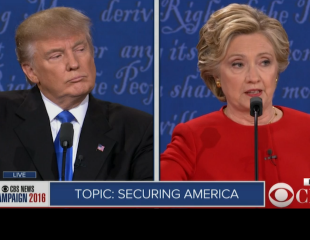 Donald Trump brought his tough-guy, America-first rhetoric onto the presidential debate stage on Monday, but was repeatedly flustered and upstaged by Hillary Clinton whose focused barbs made him interrupt and pout, and whose knowledge of how the political world works reduced him to grasping outbursts.

The first presidential debate of 2016 lived up to its hype. Trump did not deny the most incendiary attacks from Clinton—including the likelihood he does not pay any federal income taxes; telling black Americans he has nothing to apologize for after lying for years that President Obama was ineligible for office; admitting he stiffed contractors who he hired for his resorts and calling his bankruptcies smart; and again attacking women for not looking right for the job—in this case the presidency.

The debate started with both candidates being polite as the moderator asked about creating jobs. Clinton laid out her plans for rebuilding infrastructure including a green energy system across the country. But she wanted to get under Trump’s skin and quickly succeeded by saying his business empire came from his father giving him many millions more than he has acknowledged.

Trump was soon wiping the sweat from his lip, creasing his forehead, frowning, and trying to sound reasonable as he attacked Clinton with popular one-liners from his rallies—such as lambasting her support of previous trade deals and saying that she has no jobs plan. That’s when the tables quickly turned. Yes I do, she tartly replied, read my book. That kind of response, which pushed Trump to fume and fulminate, underscored her ensuing dominance on temperament and substance.

The debate continued with Trump dragging out old and off-topic right-wing memes—such as saying the Federal Reserve was political, would soon raise interest rates and destroy the economy. That line was typical of many that followed, including accusations that Clinton created ISIS, that she and the Democrats have failed non-whites in inner cities, that everything that’s wrong in America is not just the fault of Democrats but especially the Clintons, the current candidate and ex-president. In sum, Trump was appealing to anybody who was aggrieved and wanted to blame someone else.

But Clinton kept needling Trump about his business dealings, his bankruptcies and not releasing his income taxes. In each exchange, he took the bait and said something that seemed unlikely to win over undecided voters. He was a good businessman for using the bankruptcy laws, he claimed, even as he paid himself but not others. He said contractors that he stiffed deserved that treatment. He said he’d release his taxes once an IRS audit was done, but almost immediately said that he’d been audited continuously for the past 15 years—meaning that release will not be forthcoming. When Clinton suggested that he did not pay any income taxes, he interrupted “that makes me smart.”

While Trump tried to score by colorfully repeating simple lines like states like Ohio have suffered because of trade deals like NAFTA, Clinton stood behind her podium looking composed and waiting. She launched into more detailed replies, either attacking Trump for distortions, evasions and saying how his stances would hurt middle- and working-class families while benefiting wealthy people like his family. Trump did not deny, for example, that his proposed tax cuts would help the rich. She replied that such “trickle down” economics didn’t work under Ronald Reagan and would not work now. She emphasized enlarging safety nets—from raising the minimum wage, to pay equity for women, to instituting family leave, to debt-free college for most families.

The debate turned to police reform and gun control, with Trump saying he was the “law and order” candidate. Clinton replied that sounding tough was not being effective. She said climate change was real and presented big economic opportunities. Trump denied saying, as he had, that it was a Chinese hoax. When Trump attacked her for a private e-mail server at the State Department, she admitted it was a mistake and said no more. He did not keep the focus there, another sign that he was not a disciplined debater.

One of the most effective responses by Clinton came after the moderator asked Trump about his dogged pursuit of promoting the so-called birther myth, that President Obama was born outside of the country and therefore was an illegitimate president. Trump gave a long response, saying that he did the country a service by keeping an issue alive. When Clinton’s turn came to respond, she said, calmly, “Well, just listen to what you heard.” She then tied Trump’s “racist birther lie” to his “long record” of racist behavior, starting in the 1970s when his family’s real estate empire did not rent apartments to blacks until the U.S. Justice Department sued.

The debate’s effect on the public will become clearer in coming days as polls are done, but journalists covering the debate were not the only ones who were quick to say that Trump had lost the encounter. While there will be many reports fact-checking the candidates’ claims and responses, the nature of television is such that how candidates appear, interact, respond under pressure, and the resulting feelings they convey matter as much as the details of what is being said.

One revealing feature of watching the debate online was seeing twitter comments as it unfolded. Frank Luntz, a longtime Republican pollster, said that 17 of the 20 people in his debate focus group said that Clinton won. Bernie Sanders tweeted, “I don’t often agree with @MittRomney but he’s right: Trump is a ‘fraud’ and a ‘phony.’” Others said the choice facing voters was “first female president or first white nationalist.”  Others suggested that Trump just set a record for the most self-congratulatory statements in a presidential debate.

In many respects, calling the encounter a debate is not quite the right word. The 90 minutes condensed much of what has been playing out in slower motion for the past year. Trump’s vacuous but biting attacks dominated his performance after initially trying to exercise restraint and self-control. By the night’s end, he was pointing his finger at Clinton as he repeatedly accused her of being a fraud, a scheming politician, acting “holier than thou” and making promises she can’t deliver.

Clinton, for her part, showed the seasoned politician that she is. She presented her agenda, took apart his, but didn’t flinch from the stress of being under the spotlight as he did. When Trump tried to smear her with typical innuendo that she had been staying “at home” in recent days, suggesting that she was somehow weak, Clinton replied that she stayed home to prepare for the debate. “I did prepare and I am prepared to be president.” It wasn’t just one of the night’s best lines, she looked presidential.

This debate was clearly the best development for the Clinton campaign in many weeks. It’s up to the voters, of course, to draw their conclusions on who is the most presidential.

Steven Rosenfeld covers national political issues for AlterNet, including America’s retirement crisis, democracy and voting rights, and campaigns and elections. He is the author of “Count My Vote: A Citizen’s Guide to Voting” (AlterNet Books, 2008).