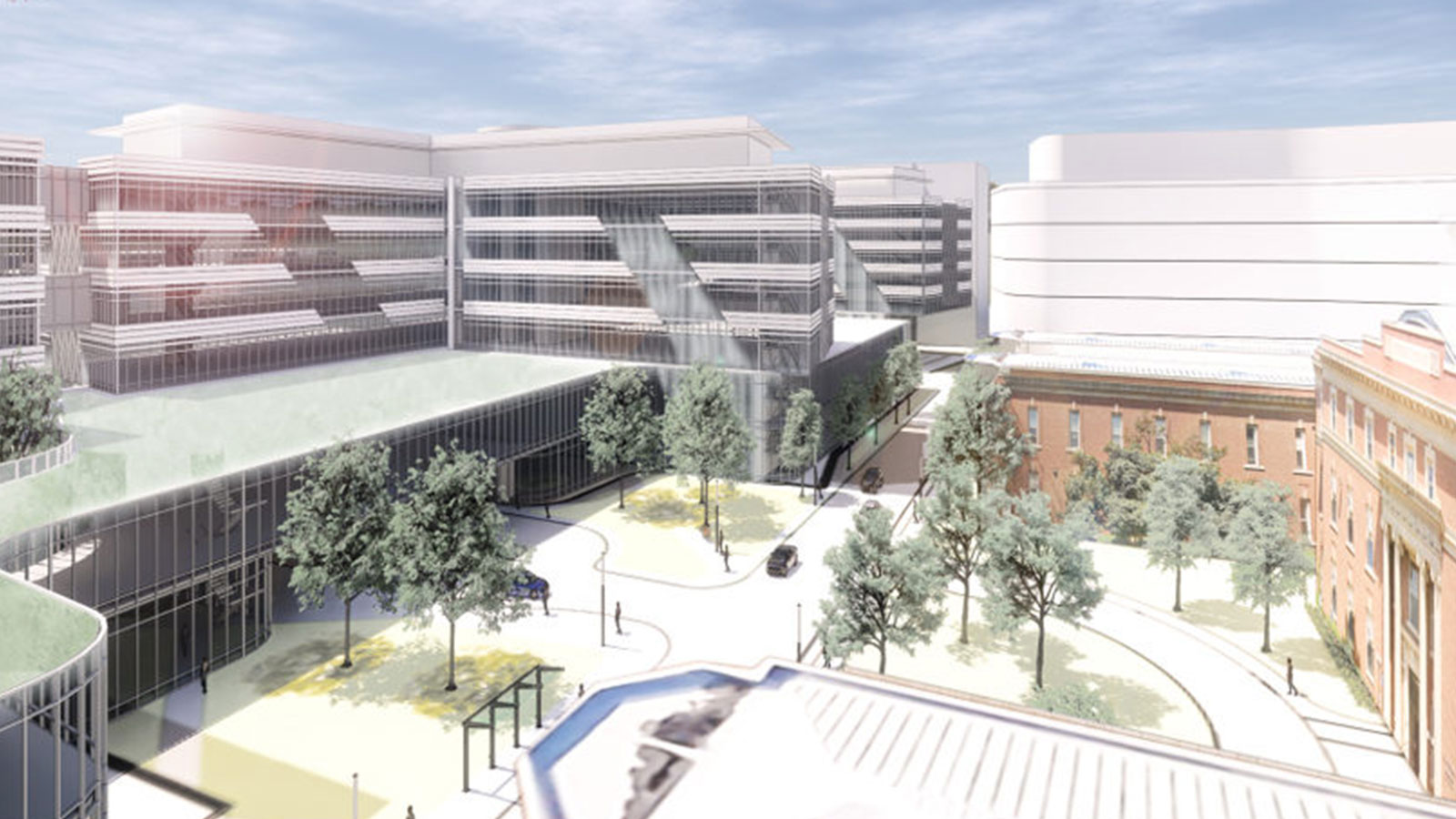 Howard University President Wayne A.I. Frederick announced the largest real estate initiative in the school’s history on Wednesday with three new interdisciplinary centers being a staple of the expansive project.

“This is a watershed moment in the history of our institution,” Frederick said. “Because of the tremendously enhanced financial posture we have worked so hard to achieve, the state of the university has never been stronger.”

Frederick and other university officials credit enrollment growth, increased philanthropic and public investment in the university and continued institutional strides towards financial sustainability with making the initiative possible.

Most of the funding, $670 million of the $785 million, will go towards the construction of the three academic centers:

Howard has not built academic buildings since 1984, making these additions “the largest investment in academic classroom space” in nearly four decades, according to university officials. In addition, major renovations will be done to the Myrtilla Miner Building, which will house the School of Education and the Howard University Middle School for Mathematics and Science. In the fall of 2021, Frederick Douglass Memorial Hall and the Undergraduate Library were reopened after years of being closed due to renovations.

“The leadership of our board and executive team, along with the caliber of students we have enrolled, the illustrious faculty we have assembled, the dedicated staff we have hired, and the committed alumni base we have cultivated, presents an opportunity for us to solidify Howard’s status as one of the preeminent institutions of higher education in the country,” Frederick said. 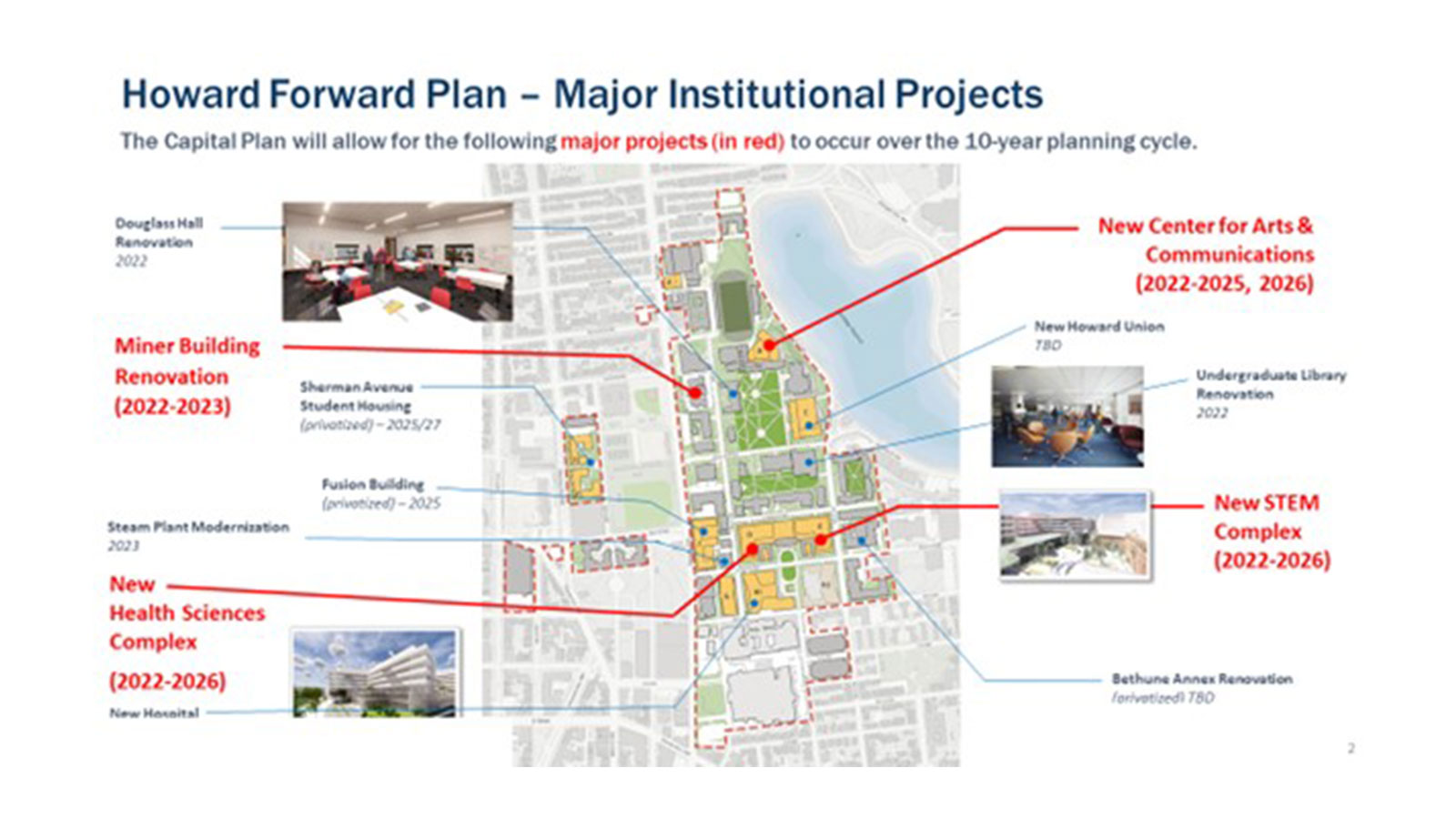 Howard University has not built academic buildings since 1984, making these additions “the largest investment in academic classroom space” in nearly four decades, according to officials. (Photo: Howard University)

The undertaking coincides with the university’s strategic plan, “Howard Forward,” which the Board of Trustees approved in spring 2018. Since 2019, the university has taken steps to strengthen the institution, working with the pillars of enhancing academic excellence, inspiring new knowledge, serving the community, improving efficiency and effectiveness, and achieving financial sustainability.

By implementing steps of the Howard Forward plan, the university’s national bond ratings by the Fitch and Standard and Poor’s (S&P) credit agencies changed from stable to positive in February. Both agencies affirmed a $300 million bond that will be integral in financing the plan’s first phase.

The bond will take the project’s development and construction activities through 2024, said Rashad Young, Howard University senior vice president and chief strategy officer. “We’ve structured the timing of money to flow through this five-year period, so that it will be available when we need it to pay for the construction that’s occurring,” he explained.

Aprill Turner, a class of 2001 graduate and former editor-in-chief of The Hilltop, is glad to see such an undertaking at her alma mater. “It is so important, making sure that we have proper facilities on campus for our students to be able to go to and attend classes,” said Turner, vice president of communications and external affairs for Higher Heights Leadership Fund. “Howard has so much legacy, and it is such an important institution to this country, to our history.”

“It is great to have historic buildings, but they need to be upkept,” she added. “This type of investment will go a long way.”

The dean of the Cathy Hughes School of Communications, Gracie Lawson-Borders, looks forward to the collaboration that the new facilities will bring.

“It’s absolutely exciting,” Lawson-Borders said. “We are so pleased. This will be a wonderful opportunity – an interdisciplinary, a multidisciplinary blending of arts, journalism, media, theater and music. It will be phenomenal. We have waited some time for this opportunity and there are many students and alumni who look forward to seeing this come to fruition.”

Jordin Greene, a graduating senior dance major from Bowie, Maryland, hopes that the new infrastructure will help programs like her own grow.

“I am very much looking forward to fine arts expanding, especially the theater arts department,” Greene said. “I hope that there’s a lot more exposure and resources with the new building. I’m excited to see how far the school can expand and the reach that it will gain with these new advances.”

Construction on the project is scheduled to begin in the fall and is expected to be complete by 2026. Each project will have a designated timetable, according to Frederick, which will be used to ensure that construction stays on track.

The construction requires minority business involvement, and no one has been specifically contracted for these projects, Frederick said to Howard University News Service in an interview. The university will begin to put out calls for architectural applications for the new buildings this month. It will also bring in students on the projects.

“Students involved in various areas such as business development, architecture, etc., will also have an opportunity to participate in the projects,” the president said. “We intend to continue to maintain that going forward.”

April Carter, an administrative assistant in the College of Fine Arts and a 1997 musical theater graduate, was happy to hear of the plans for the Center for Arts and Communications.

“Long overdue and very much appreciated,” Carter said. “I am looking forward to seeing how it is all going to come together. I am really anxious to see the plans for the building.”

“Having everyone come together is only going to propel all of the programs in a forward motion.”