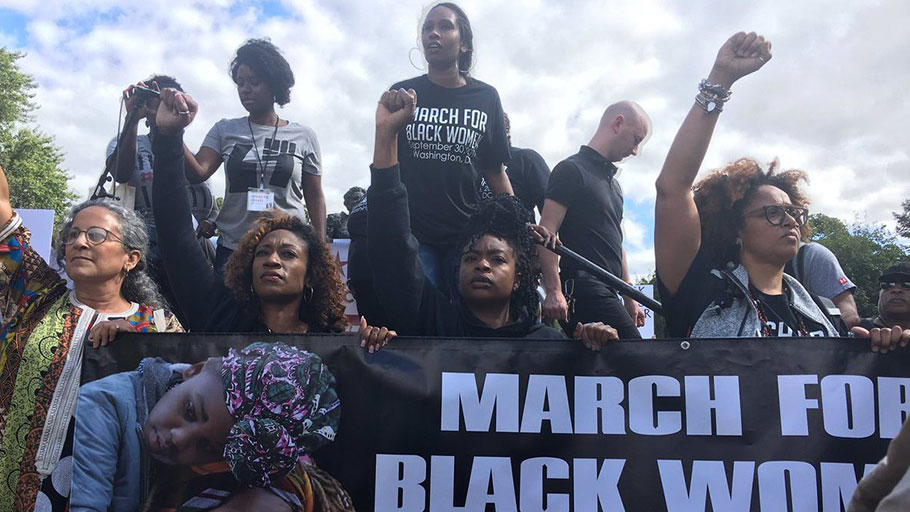 Hundreds Gather for the March for Black Women in D.C.

You Are Here: Home » Blog » News & Current Affairs » Hundreds Gather for the March for Black Women in D.C.

“We Are Marching To Say That Black Women’s Lives Matter…”

Black activist groups marched on the National Mall and Justice Department in Washington, D.C. on Saturday to raise awareness about the injustices black women face.

Black Women’s Blueprint, BYP100 and Trans Sistas of Color Project and other groups have united for the March for Black Women. The event’s co-chairs are activists Farah Tanis, Bré Anne Campbell, Charlene A. Carruthers and Monica Raye Simpson.

The march’s goal was to “denounce the propagation of state-violence and the widespread incarceration of Black women and girls, rape and all sexualized violence, the murders and brutalization of transwomen and the disappearances of our girls from our streets, our schools and our homes,” according to a statement.

In the statement on their website, the organizers noted the many black women who have yet to receive justice this year, including the 12 black trans women who were killed in the first six months, the 22 black women who reported being sexually abused by Bill Cosby, the black women killed by law enforcement and the black girls who went missing between Baltimore and D.C.

“We are marching to say that black women’s lives matter, that black mamas matter, and to call for an end to systems and policies that deny our dignity, from bans on abortion coverage to mass incarceration,” Simpson, executive director of SisterSong, told NBC4.

Demonstrators from the March for Black Women, which started at Seward Square, converged with the March for Racial Justice at Lincoln Park and continued to the Department of Justice and finally the National Mall. The march was open to all. Sister marches in cities around the country, including Phoenix, St. Louis and Philadelphia, also took place on Saturday.

Look at some images from Saturday’s protest below.

Some of the POWERFUL signs today for the March for BlackWomen! #m4bw #m4rj #BlackLivesMatter pic.twitter.com/KKzkELcseZ

Thank you to the women who organized the March for Black Women today✊?#M4BW pic.twitter.com/WQi58jmYnJ

Learn more about the march here.