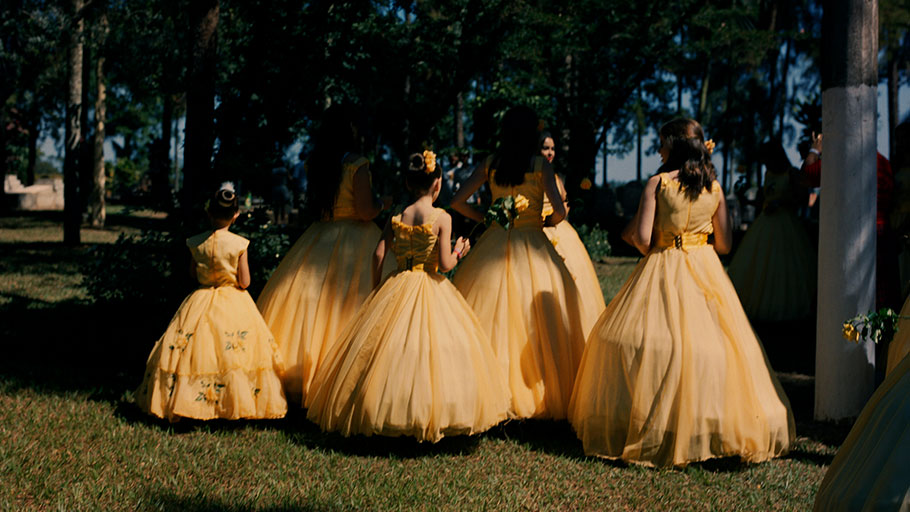 They lost the Civil War and fled to Brazil. Their descendants refuse to take down the Confederate flag

You Are Here: Home » Blog » News & Current Affairs » They lost the Civil War and fled to Brazil. Their descendants refuse to take down the Confederate flag

Folk dancers gather before performing at the 2018 Confederate Festival in Santa Bárbara d’Oeste, Brazil. Each of their dresses is embroidered with the name of a state in the U.S. Confederacy. (Giovana Schluter Nunes)

Brazil’s confederados gather in Sao Paulo state each year to celebrate all things Dixie. As in the United States, calls are growing for a reassessment.

To Marina Lee Colbachini, it was a family tradition. Each spring, she would join the throngs who descended on a nondescript city in southern Brazil, don a 19th-century hoop skirt and square dance to country music.

The theme of the annual festival: the Confederate States of America.

It’s one of history’s lesser-known episodes. After the Civil War, thousands of defeated Southerners came to Brazil to self-exile in a country that still practiced slavery. For decades, their descendants have thrown a massive party that now attracts thousands of people to the twin cities of Americana and Santa Bárbara d’Oeste to celebrate all things Dixie. The Confederate flag?Everywhere.

On flagpoles and knickknacks. Emblazoned on the dance floor. Clutched by men clad in Confederate battle gray. Decorating the grounds of the cemetery that holds the remains of veterans of the rebel army — the immigrants known here as the confederados.

In a country that has long been more preoccupied with class divisions than racism, the Confederate symbols, stripped of their American context, never registered much notice. But now, as the racial reckoning in the United States following the killing of George Floyd inspires a similar reexamination of values in Brazil, that has begun to change. 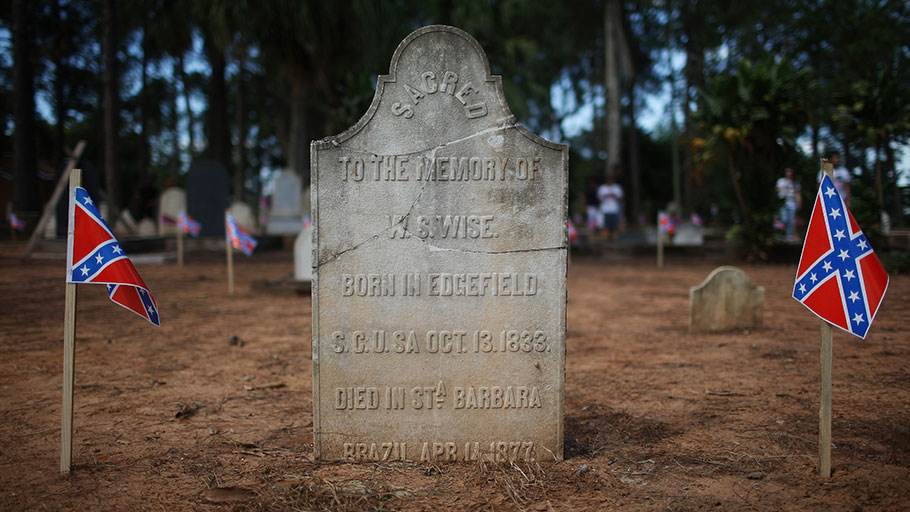 Confederate flags adorn the grave of a U.S. settler in the American Cemetery in Santa Bárbara d’Oeste during the 2016 Confederate Festival. (Mario Tama/Getty Images).

Brazilians in recent weeks have demanded the removal of the notorious statue in São Paulo of a 17th-century settler who enslaved indigenous people. Protests for black equality have rumbled through several cities. And in Americana and Santa Bárbara d’Oeste,the cities founded by the Confederates, Brazilians who have never been to the United States are increasingly asking questions piercingly familiar to Americans: Where should the Confederacy be remembered — on a flagpole, or in a museum?

“My mind has been opened to the questions,” said Colbachini, 35, whose middle name pays homage to Confederate Gen. Robert E. Lee. She attended the festival for most of her life, but has now stopped going. Despite worrying what her community might think, she has begun asking that the flag be taken down.

“It represents my family’s traditions,” she said. “But in the entire world, in the United States, they know what it also represents.”

The debate has simmered for years.On one side is the Fraternity of American Descendants, the group that throws the annual party, tends to the Confederate cemetery grounds and promotes a Lost Cause orthodoxy reminiscent of the most ardent Confederacy apologists. Onthe other is the Black Union for Equality (UNEGRO), which has been leading a community charge to strip the festival of the flag considered by many to be a symbol of hate and repression.

In what might bethe farthest outpost of the American culture wars, a new battle over the Confederate flag is only just beginning. 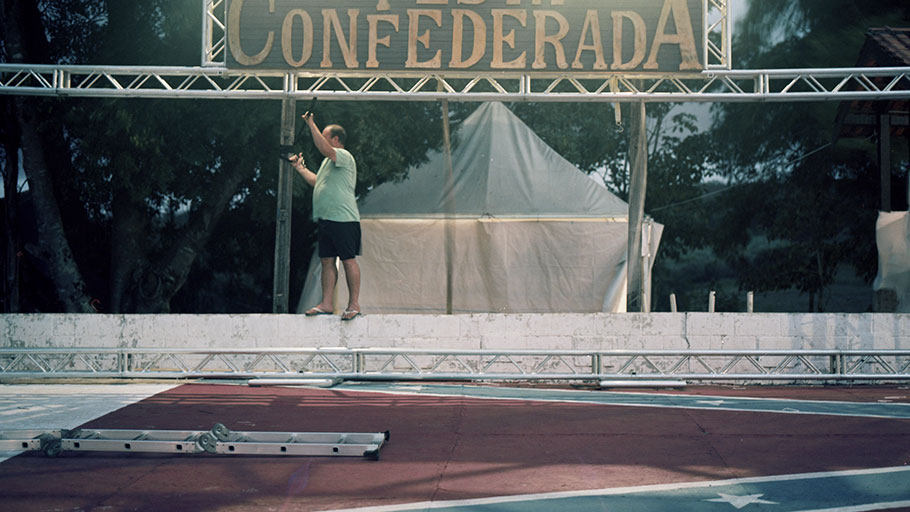 A volunteer helps take down the sign after the 2019 Confederate Festival. The dance floor is emblazoned with a giant Confederate flag. (Giovana Schluter Nunes).

A mass exodus in search of land and slaves

The newspapers called it “Brazilian fever.” With the war lost, thousands of Southerners, fearful of living under Northern rule among freed slaves, were seeking other opportunities. Some pushed for Mexico. Others for Venezuela. But Brazil, which wouldn’t abolish slavery for another 23 years, proved to be the most attractive of countries.

Emperor Dom Pedro II, a fierce advocate of the South during the war, tried to induce their immigration, offering free transport, cheap land and an easy path to citizenship. Before long, Southerners sailed out from New Orleans and Mobile, Ala., for Rio de Janeiro. Eventually, between 8,000 and 20,000 immigrated.

“Move here and buy land,” Col. Charles Gunter urged in a letter to the Charleston Mercury newspaper in 1868. “We have here a beautiful place for our village, in the center of rich land, and on a grand river.”

But historians say one of the central draws was a country where Southerners could freeze time and continue a lifestyle that had been put to a violent end in the United States. In journals, one bragged about how inexpensive Brazilian slaves were; another lamented that they couldn’t bring recently freed American slaves to Brazil.

“They came to continue having slaves,” said Luciana Brito, a historian at the Federal University of Recôncavo da Bahia. “They associated the existence of slavery in Brazil with the maintenance of a system of racial subservience.” 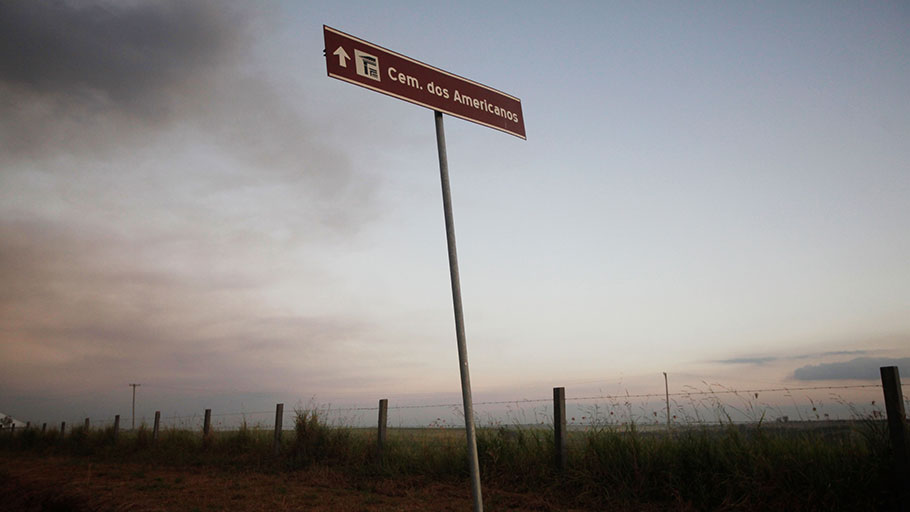 A sign points the way to the American Cemetery. (Mario Tama/Getty Images).

Brito and other historians have scoured letters, journal entries and deeds of sale. One researcher found that more than three-fourths of Southerners who wrote to the Brazilian government to inquire about immigration were slaveholders. At least 54 families bought at least 536 slaves upon entering Brazil. Using racial epithets, they expressed fears of an “African government” in Brazil, and black “rulers” in the United States.

“The confederados presented themselves as refugees of a devastated America,” said Jordan Brasher, a geographer at Columbus State University who wrote his dissertation on the confederado communities. “As the downtrodden, poor, defeated Confederate soldiers looking to pull themselves up by their bootstraps.

“They also brought the ideology of white supremacy and racial terrorism from the United States South to Brazil.”

In one dark episode, two Confederate immigrants led a mob in the lynching of a police chief who had refused to track down escaped slaves — in front of his family. The confederados were also suspected of assassinating a Brazilian senator who supported emancipation.

In 1888, Brazil became the last country in the Americas to abolish slavery, nearly a quarter-century after the United States. But interracial relations in the two countries were different. There were neither draconian racial distinctions in Brazil nor government prohibitions on intermarrying between races. The races mixed, yielding a country of extraordinary diversity. Over time, some confederados adopted new opinions on race.

“One of the changes most evidenced in the Confederados of my youth . . . was their belief in tolerance among the races,” Eugene C. Harter, who was raised among the confederados, wrote in a book about the community. “This they had acquired from the Brazilians.”

The confederados and their descendants assimilated and intermarried. English was largely forgotten. The towns become indistinguishable from their neighbors.

One of the few elements to remain was the yearly Confederate party, with its pageantry, its music and its flag. 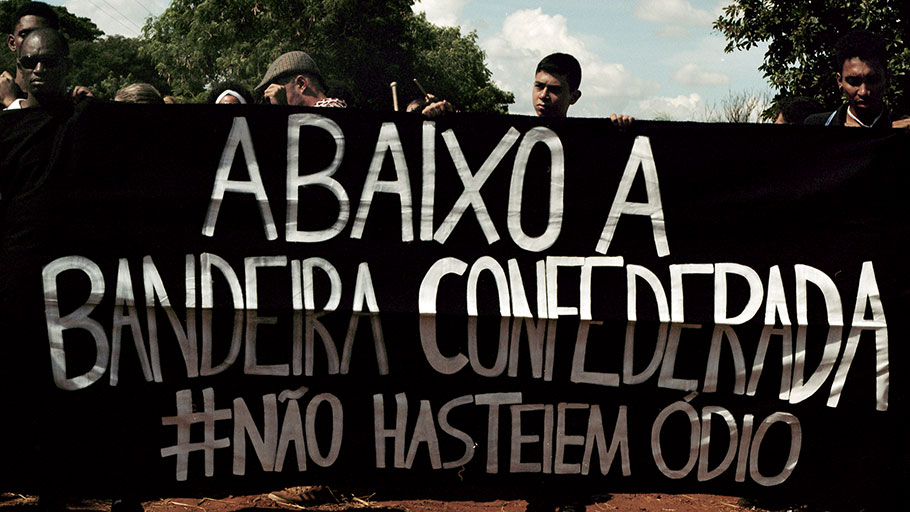 Members and supporters of UNEGRO — United Blacks for Equality — carry a banner that reads, “Down with the Confederate flag” and “#Don’tHoistHate” at the entrance to the 2019 Confederate Festival. (Giovana Schluter Nunes).

‘I didn’t want to be black’

Cláudia Monteiro, president of the local Black Union for Equality, rarely paid much attention to the party. She’d spent 40 of her 48 years in Santa Bárbara d’Oeste and, to her, it was nothing more than a town quirk. Living in Brazil, other racial issues had always seemed more pressing, including those in her own life.

Like many Brazilians, she grew up identifying as morena, one of the many distinctions in the country’s racial taxonomy, rather than the darker negra. Negra, she was led to believe by mass media, and even in her family, was “always ugly. Their hair was ugly. Their form was ugly. I didn’t want to be black.”

Not until she saw the work of the photographer Sebastião Salgado did she reassess that belief. In his images, she said, she recognized so much beauty and dignity in the faces of Africa and Brazil that she committed herself to black history and activism.

In the summer of 2015, she and another activist got to talking about Dylann Roof. The killer of nine black churchgoers in Charleston had glorified the Confederate flag, and it was taken down from the South Carolina statehouse. But in Brazil, officials weren’t asking for its removal from the Confederate extravaganza. They were actively supporting it, and had put the party on the official São Paulo events calendar.

With the deadly 2017 Unite the Right rally in Charlottesville, their frustration only grew. “We started to mobilize,” said Carlinhos Barros, the other activist.

But the man whom they asked to remove the flag had a very different interpretation of it — an interpretation they learned in detail at a public debate. The sides agreed to the event in the hope of settling their differences. But before a crowd of dozens, they could scarcely agree on a shared syntax, much less a common set of facts.

One said the flag was racist. The other side said it wasn’t.

“The flag will not come down,” said João Leopoldo Padoveze, president of the Fraternity of American Descendants. 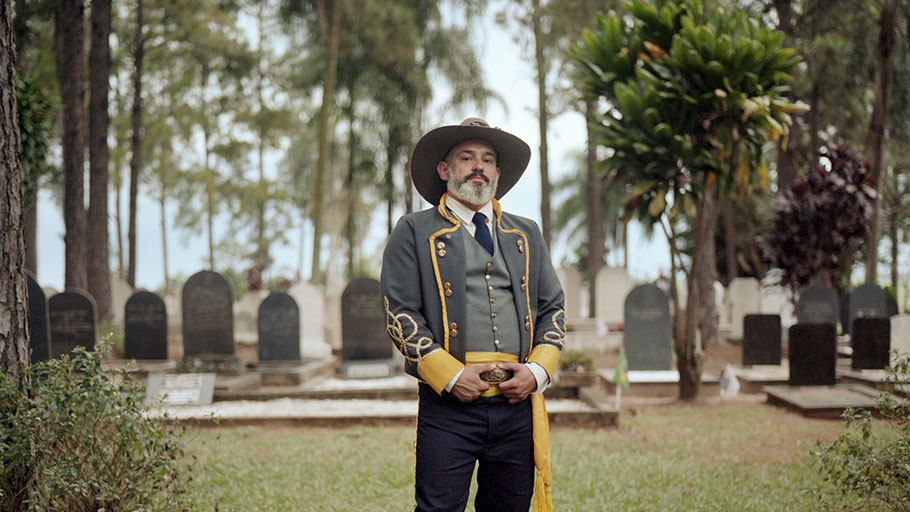 João Leopoldo Padoveze, president of the Fraternity of American Descendants of Santa Bárbara d’Oeste, poses at the Cemitério do Campo in April 2019. (Giovana Schluter Nunes).

He said there was no reason to be ashamed of the flag. It wasn’t racist, and neither were the confederados who waved it. His great-grandmother, and her mother before, had been black. People of color had frequently come to the party. So Padoveze put the Confederate flag on his car, in his office, on the hat he wore while giving speeches.

He wanted people to know the good his ancestors had accomplished in Brazil. They introduced farming equipment and techniques that helped to revolutionize Brazilian agriculture. They founded the first Protestant churches. They established schools all over São Paulo state. Brazil was better because the confederados settled here, he believed, and the flag was their symbol.

“They are saying that I’m racist, when I’m not,” he said. “Just because I have a different view of this very complex thing.”

So Padoveze refused to take it down, despite Monteiro’s pleas. She responded by camping herself outside the party in protest. Last year, scores of people arrived, carrying large banners. “Lower the Confederate flag,” they demanded.

The problem wasn’t the party, Monteiro told the revelers. It was the flag. It had to go.

“I’ve considered what they’ve said, but I know the flag isn’t what they say it is,” he said. “This is my view, and it’s very personal.”

Monteiro has also refused to yield. Her group is planning to ask local lawmakers for help. They’ve distributed letters of condemnation that have garnered the support of more than 100 religious and civil rights organizations. Younger generations, whose pleas for racial equality have intensified since George Floyd’s killing in Minneapolis police custody, have taken up her calls.

This year’s party, scheduled for April, was canceled amid Brazil’s coronavirus outbreak, nowthe world’s second worst. But both Monteiro and Padoveze know the flag will fly again in their community.

“It’s the story of my family,” Padoveze said.

“We have different views of different worlds,” Monteiro said.