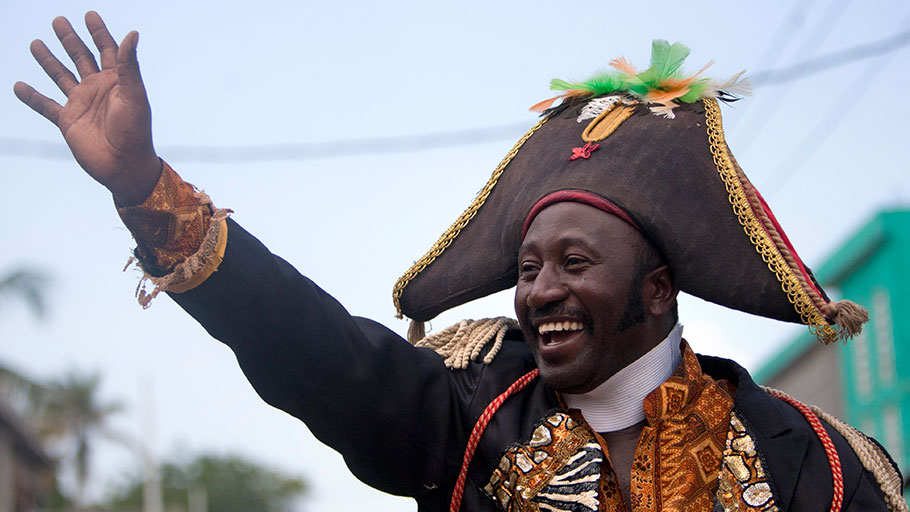 Haiti was the first nation to permanently ban slavery

You Are Here: Home » Blog » Reparations » Haiti was the first nation to permanently ban slavery

Why this matters today.

Global protests in support of Black Lives Matter have systematically exposed the legacies of slavery and colonialism today.

This has put many on the defensive. White people are quick to tout stories of abolition, emphasizing the path bravely forged by imperial powers like Britain and France. They diminish the realities and consequences of slavery and colonialism by demanding gratitude for ending the same violent systems they had previously implemented.

These narratives are historically inaccurate. Neither the French nor the British were the first to abolish slavery. That honor instead goes to Haiti, the first nation to permanently ban slavery and the slave trade from the first day of its existence. The bold acts of Haitians to overthrow slavery and colonialism reverberated around the world, forcing slaveholding nations like Britain and France to come face to face with the contradictions of their own “enlightenment.” Many would now like to forget this reckoning.

Beginning in 1697, Haiti was a French colony with the name Saint Domingue. By the second half of the 18th century, it was the most wealth-producing colony in the world, exporting sugar, coffee and indigo to France. Enslaved men, women and children produced this wealth under an incredibly violent system of slavery, regulated and legitimated under Louis XIV’s Code Noir. The death rate among the enslaved was so high that the French constantly imported new captives to work the plantations. At any one time, about two-thirds of the enslaved population had been born in Africa.

In 1791, enslaved people on the northern sugar plains of Saint Domingue rose up in a coordinated rebellion to destroy French slavery. This started the 13-year event that has come to be known as the Haitian Revolution. In 1793, the rebels freed themselves by forcing the colonial commissioners to abolish slavery throughout the colony. The colony then sent a delegation to the French National Assembly to convince the French government to abolish slavery in the entire Empire. “The National Convention declares that negro slavery in all of the colonies is abolished, in consequence, it decrees that all men, without distinction of color, living in the colonies are French citizens and will enjoy the rights guaranteed by the constitution,” the Assembly wrote. This was France’s first abolition of slavery, a concession offered to retain the valuable colony within the Empire. But it wouldn’t last.

In 1799, Napoleon Bonaparte established himself as First Consul of France and became determined to rein in the growing autonomy of Saint Domingue under the revolutionary leader and colonial governor Toussaint L’Ouverture, who published the 1801 colonial constitution that “forever abolished” slavery.

Bonaparte sent an army to restore Saint Domingue to colonial order. His brother-in-law, Charles Leclerc, led the effort to deport L’Ouverture and waged a “war of extermination.”

“Here is my opinion on this country,” Leclerc wrote in a letter to Bonaparte on Oct. 7, 1802 “we must destroy all of the black people in the mountains — men and women — and spare only children under twelve years of age. We must destroy half of those in the plains and must not leave a single person of color in the colony who has worn an epaulette.”

And so the first French abolition ended quickly. Bonaparte’s return to colonial order included slavery and, in 1802, he reinstated slavery in France’s other Caribbean colonies. But the rumors that France would reinstitute slavery in Saint Domingue sparked the war for Haitian independence in October 1802.

Just over a year later and under the slogan “Freedom or Death,” Jean-Jacques Dessalines led the revolutionary army to victory. On Jan. 1, 1804, Dessalines declared Haitian independence, promising Haitians would “forever ensure the empire of liberty in the country that gave us birth; we must seize from the inhuman government that has for a long time kept us in the most humiliating torpor, all hope of re-enslaving us; we must then live independent or die.”

From the first day of its existence, Haiti banned slavery. It was the first country to do so. The next year, Haiti published its first constitution. Article 2 stated: “Slavery is forever abolished.” By abolishing slavery in its entirety, Haiti also abolished the slave trade, unlike the two-step approach of the European nations and the United States.

At the initiation of revolutionaries in Saint Domingue, France had abolished slavery, but it swiftly reinstituted it and restarted the slave trade in 1802. The British, many of whom tout their leading role in abolition, abolished the slave trade in 1807, but only passed the Abolition Act in 1833 and continued enslaving people in the Caribbean until 1838. And even then, the Abolition Act was similarly spurred on by a major rebellion in Jamaica in 1831-32.

Haitians, by contrast, forced one of the most powerful European empires in the 18th century to abolish slavery and then protected that abolition by declaring independence. Haitian revolutionaries were the architects of France’s 1793 and ’94 abolition and they founded an abolitionist state in the Americas in 1804.

A comprehensive support of Black Lives Matter must acknowledge and celebrate black history and its foundational role in shaping the modern world, including the abolition of slavery. By silencing Haiti and erasing its critical role in modern history, Euro-American nations have been able to claim abolitionist bragging rights rather than reckoning with their centuries-long participation in Atlantic slavery and only slow and grudging decisions to end it, following the demands of black people.

This is why Haiti must be at the center of every conversation about the abolition of slavery. Haitians defied all odds and fought courageously for their freedom; no one gave it to them.