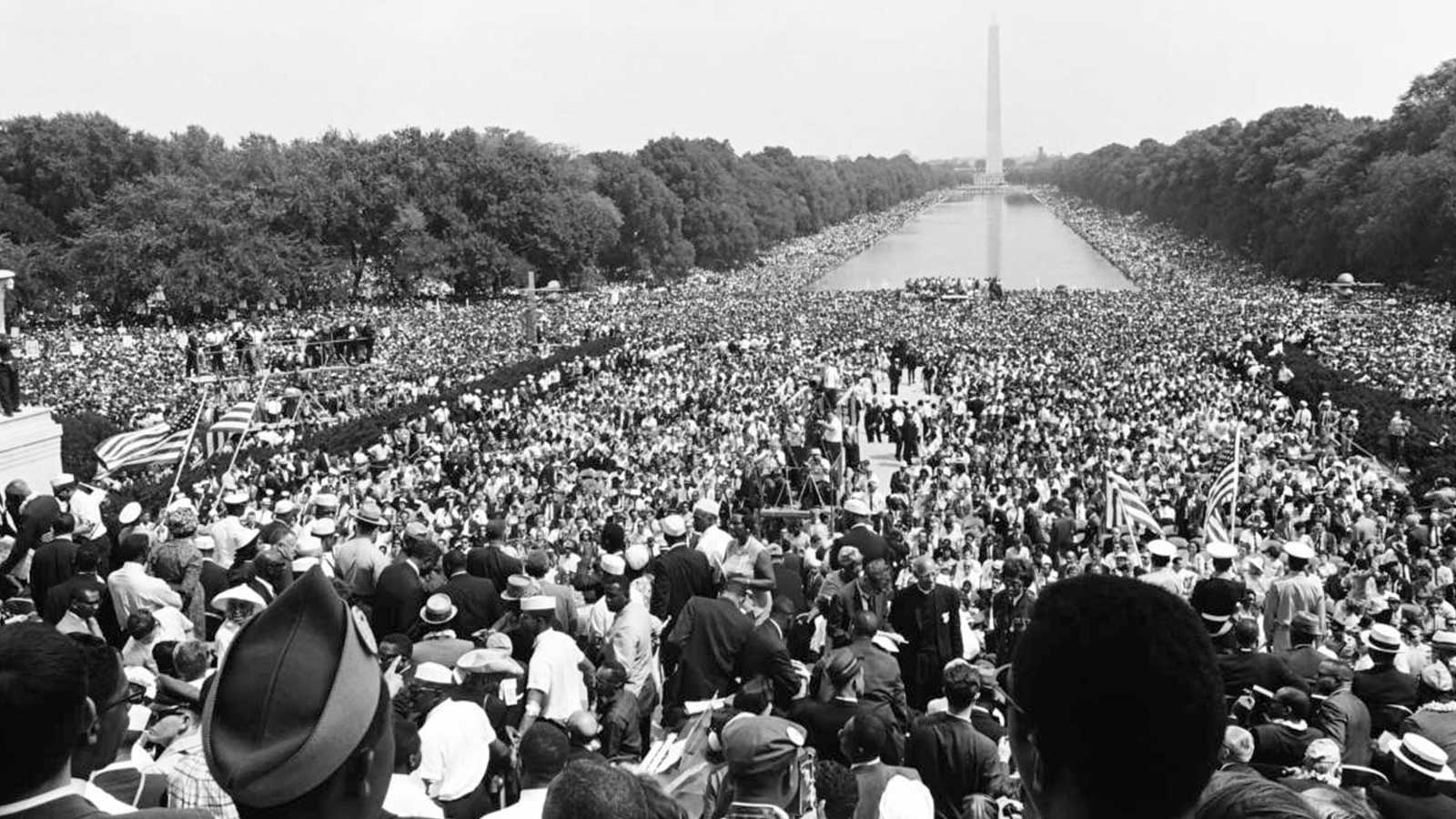 A mass march on August 28 will call on Senate Democrats to ditch the filibuster and pass voting rights legislation.

The nation has reached a tipping point, they say, and the fight to save democracy from modern forms of voter suppression has never been more urgent. An increasingly conservative Supreme Court has gutted the Voting Rights Act, allowing states with legacies of discrimination to pass laws restricting access to the ballot. Voting rights advocates say ballot restrictions specifically target lower-income and Black and Brown voters, and voter suppression laws are designed to maintain minority rule for the predominantly white Republican Party.

August 28 will mark the anniversary of the 1963 March on Washington for Jobs and Freedom, the mass rally in Washington, D.C. that brought us Martin Luther King Jr.’s “I Have a Dream” speech and set the stage for the Voting Rights Act and other civil rights victories in Congress. King’s family and other civil rights leaders are now calling for another mass march on Washington on August 28 that will turn up the heat on Democrats who have so far failed to pass three voting rights bills languishing in a divided Senate.

“We find ourselves at a very critical and crucial juncture of our nation, because we are promoting democracy all over the world but we have the audacity to suppress democracy at home,” said Martin Luther King III, King Jr.’s son, during a call with reporters on Thursday.

Civil rights leaders and activists across the country say Senate Democrats must “carve out” an exception to the filibuster and pass the legislation ahead of the next election to combat a wave of state voter suppression laws fueled by right-wing conspiracy theories and former President Trump’s racist lies about voter fraud.

Nationwide, 18 states have passed 30 laws that restrict ballot access in one way or another in the months since Trump lost the 2020 election and drummed up conspiracy theories about voter fraud, according to the Brennan Center for Justice. In the same time period, 25 states have enacted 54 laws to expand access to the ballot, partly in reaction to the way in which early and absentee voting ballooned in 2020 due to the COVID pandemic.

“We cannot let a Jim Crow filibuster — which is what the filibuster has been used for — stand in the way of our voting rights,” said Rev. Al Sharpton, one of several longtime civil rights leaders who has met with Biden and members of Congress about passing voting rights legislation.

While Biden has made it clear that he supports voting rights legislation, Sharpton said the president would not commit to changing Senate filibuster rules, which require Democrats to find 10 Republican votes to pass certain legislation. Two conservative Democrats — Sen. Joe Manchin of West Virginia and Sen. Kyrsten Sinema of Arizona — continue to oppose changing the filibuster rule, but organizers hope a historic turnout on August 28 will encourage even these lawmakers to stand on the right side of history.

“Lyndon Johnson did not lead the Voting Rights Act movement, he signed the bill,” Sharpton said. “Joe Biden will sign this bill, and we are the ones who are going to make sure he has something to sign.”

Nationwide, 18 states have passed 30 laws that restrict ballot access in one way or another in the months since Trump lost the 2020 election.

A coalition of dozens of civil rights and racial justice groups is also organizing mass rallies in Atlanta, Georgia, and Phoenix, Arizona, two states where Republican-controlled legislatures have passed what advocates say are broad voter suppression laws that restrict access to the ballot. A challenge to the Arizona law citing the Voting Rights Act made its way to the Supreme Court, where conservative and moderate justices recently upheld the state’s restrictions on absentee voting, setting a precedent that effectively pulled the few remaining teeth from the Voting Rights Act.

In Georgia, Republicans passed sweeping ballot restrictions that sparked national outrage after unprecedented turnout among Black voters helped sway the 2020 elections. Like other southern states, Georgia is a former Jim Crow state with a history of suppressing the Black vote on a large scale, and prior to 2013 Georgia was required by Voting Rights Act to clear significant changes to state and local elections with the federal government. However, the Supreme Court gutted the so-called “pre-clearance” section of the Voting Rights Act in 2013 and removed this requirement, ruling in effect that discrimination is a thing of the past.

Voting rights and racial justice groups are now focused on the federal legislation S.1, the For the People Act of 2021, an elections reform bill introduced by Democrats that would curb partisan gerrymandering, establish national standards for voter registration, reform campaign finance rules, and expand early and absentee voting, among other measures. They are also pushing Democrats to pass the John Lewis Voting Rights Advancement Act, which would restore pre-clearance protections of the Voting Rights Act. Activists are also pushing for representation in Congress for voters in Washington, D.C., where many voters are Black and Brown.

Republicans have panned the For the People Act as an unnecessary partisan power grab that would infringe on the rights of states. (White supremacists have long evoked “state’s rights” to combat federal efforts to end slavery and racial discrimination.) Manchin has also said that he opposes the voting rights legislation, making its passage in the evenly divided Senate virtually impossible unless the latest the mass march on Washington can change a lawmaker’s mind. Republicans blocked the bill from coming up for debate in June, and Manchin said he prefers a bipartisan approach to election reform.

However, Manchin and at least one moderate Republican have voiced tentative support for the John Lewis legislation that would restore the key pre-clearance protections once provided by the Voting Rights Act. Sharpton has met with Manchin and said the senator is waiting on fellow lawmakers to release the final language of the bill. Still, Democrats would need to overcome a Republican filibuster, and that means finding 10 GOP votes or changing Senate rules, at least temporarily.

“Every American should recognize this moment for the tipping point that it is,” said Andi Pringle, the political and strategic campaigns director for March On, the coalition planning the voting rights rallies.

King III said that, back in early 1965, there were not enough votes in Congress to pass the Voting Rights Act. However, the original March on Washington had already made history, and civil rights activists were organizing and marching across the country. They marched in Selma, Alabama, where protesters were infamously attacked by police on “Bloody Sunday,” generating images that changed the conversation and paved the way for the Voting Rights Act to pass.

Now, civil rights leaders are preparing to march once again, hoping to pull the nation’s attention toward Congress. Organizers said social distancing will be encouraged at the rallies, and free COVID tests and masks will be available.

“I am confident that we are going to get something … and the fact of the matter is, we’re not giving up,” King III said.

Source: TruthOut
Featured Image: Crowds gather at the National Mall during the March on Washington for Jobs and Freedom in Washington, D.C., on August 28, 1963. (NBCO Photo Bank, NBCUniversal)