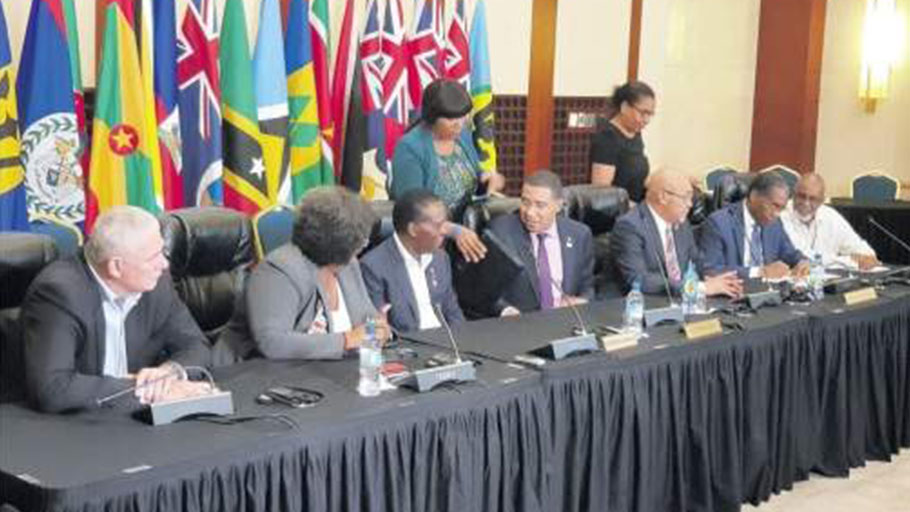 Mottley: Caricom meeting was ‘action, not a bag a words’

You Are Here: Home » Blog » News & Current Affairs » Mottley: Caricom meeting was ‘action, not a bag a words’

MONTEGO BAY, St James — Caribbean Community (Caricom) heads of government are in agreement that the just-concluded 39th Regular Meeting held in Jamaica was not a talk shop, but harvested significant advances of integration in the region.

The conference was held at the Montego Bay Convention Centre from July 4 to 6.

“Action, not a bag a words,” was how Barbados Prime Minister Mia Mottley described the three-day summit.

Her Jamaican counterpart, Andrew Holness, who is also the present chairman of Caricom, was in full agreement.

“We can confidently say that the 39th conference has delivered on the long-awaited promises to our citizens of this region,” Holness noted.

He further stated: “There is a sense that Caricom is all about talk, and so, yes, there is sometimes much talk. But what we have seen here is we as leaders have had to confront the implementation deficit.”

In fact, there was consensus among the leaders that the most significant gains coming from the summit was Friday’s signing of the Protocol on Contingent Rights, to be accorded to spouses, children and other dependents of persons who exercised the right to move within the framework of the Caricom Single Market.

“We promised that we would ensure family unification through the granting of important rights to spouses and dependents of citizens that move across the region to work, provide their services, and establish companies. We have guaranteed those rights through [the] Protocol on Contingent Rights that we have just signed a few minutes ago,” Holness said in his address to journalists at a press conference Friday night.

“This is a matter that is long outstanding and is a major step that should encourage greater use of the free movement regime, as it ensures greater level of comfort and peace of mind for families. This is a crucial step for making Caricom more functional and relevant to the people of the region.”

“When last I was in Government the Protocol on Contingent Rights was there ready for signature. Ten years have elapsed since. For this protocol to have been signed today (Friday) is the most significant event in the history of Caribbean affairs since the single market was signed here in Jamaica and came into effect here in Jamaica in 2006,” Mottley argued. “This is where it matters, this is where it makes a difference to the lives and decisions of people, and I think that the media can work with us to communicate in a tangible way what this means for every Caribbean citizen who belongs to a country that is signatory to the single market.

Holness also gloated over the meeting of the Council of Finance Ministers, which on Wednesday met for the first time in five years.

Among other noteworthy accomplishments was the mandating of member states to have in place by the 31st of August 2018, a policy which will guide border officials on how they should treat nationals who are denied entry. This will safeguard the rights of all Caricom nationals moving across the region.

Also agreed during the meeting was the convening of a special meeting on the Caribbean Single Market and Economy to be held in Trinidad and Tobago in November of this year, and “to find sole focus to this flagship issue of the Community”.

“Furthermore, the prime ministerial subcommittee on the CSME will now have quarterly meetings starting in September in Barbados, which will be hosted by Prime Minister Mottley to give urgency to the implementation process,” Holness also outlined.

“We have have also placed a great focus on advancing those areas which will help create enabling support measures for a competitive single market. These include an investment policy, an investment code, an incentive regime, an integrated capital market, and securities legislation,” the Jamaica prime minister went on.

Holness added that: “We promised our people free movement and this conference has recommitted to the free movement of skills [and] has agreed that all states by the 31st of December, 2018 would have put in place the necessary legislative framework to facilitate all 10 approved categories of skills.”

All the heads of government for the 15 member states were in attendance at the conference which had as its theme: ‘Building Stronger Resilience and Secure Partnerships for Prosperity’.