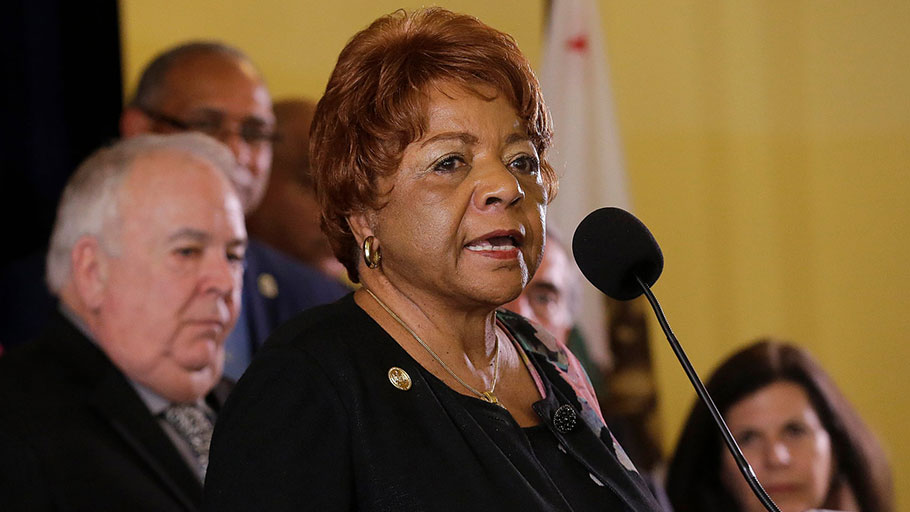 Alice Huffman’s consulting firm is on track to make $800,000 from its work but she denies there is a conflict of interest. Photograph: Jeff Chiu/AP

California president under fire for opposing pro-tenant measure yet working as a paid consultant for real-estate backed campaign.

By Sam Levin, The Guardian —

The California leader of a major US civil rights group is facing backlash for fighting a rent control measure while working as a paid consultant for an opposition campaign funded by real estate companies.

The National Association for the Advancement of Colored People (NAACP) in California is opposing a pro-tenant initiative that has widespread support from civil rights groups and progressive housing activists. Alice Huffman, the chapter president, has admitted to being a paid consultant for the campaign opposing the proposal.

Proposition 10 (Prop 10) would allow cities and counties across California to expand rent control, repealing a longstanding law that critics say has contributed to soaring rents and the massive housing crisis in one of the wealthiest regions in the country. The measure is endorsed by the state’s leading housing rights’ groups, the ACLU, multiple city governments, dozens of labor unions, the California Democratic party and numerous black civil rights groups.

The NAACP’s surprise partnership with the opposition campaign, which is funded by real estate groups, has led to internal conflicts at one of the most well-known and oldest civil rights organizations in the US – and could damage Prop 10’s chances at the polls in November. Records and interviews reveal that:

Huffman was defensive in an interview with the Guardian on Monday, saying: “I don’t apologize for it … I don’t see it as a conflict of interest.”

‘That’s the dirtiest of dirty tricks’

Huffman, who was first elected chapter president in 1999, has for years also run her own firm called AC Public Affairs. The company in recent months has been paid more than $700,000 for campaigning against the rent control measure, records show. She said she would receive $800,000 total for the contract, which was first reported in the San Francisco Chronicle. 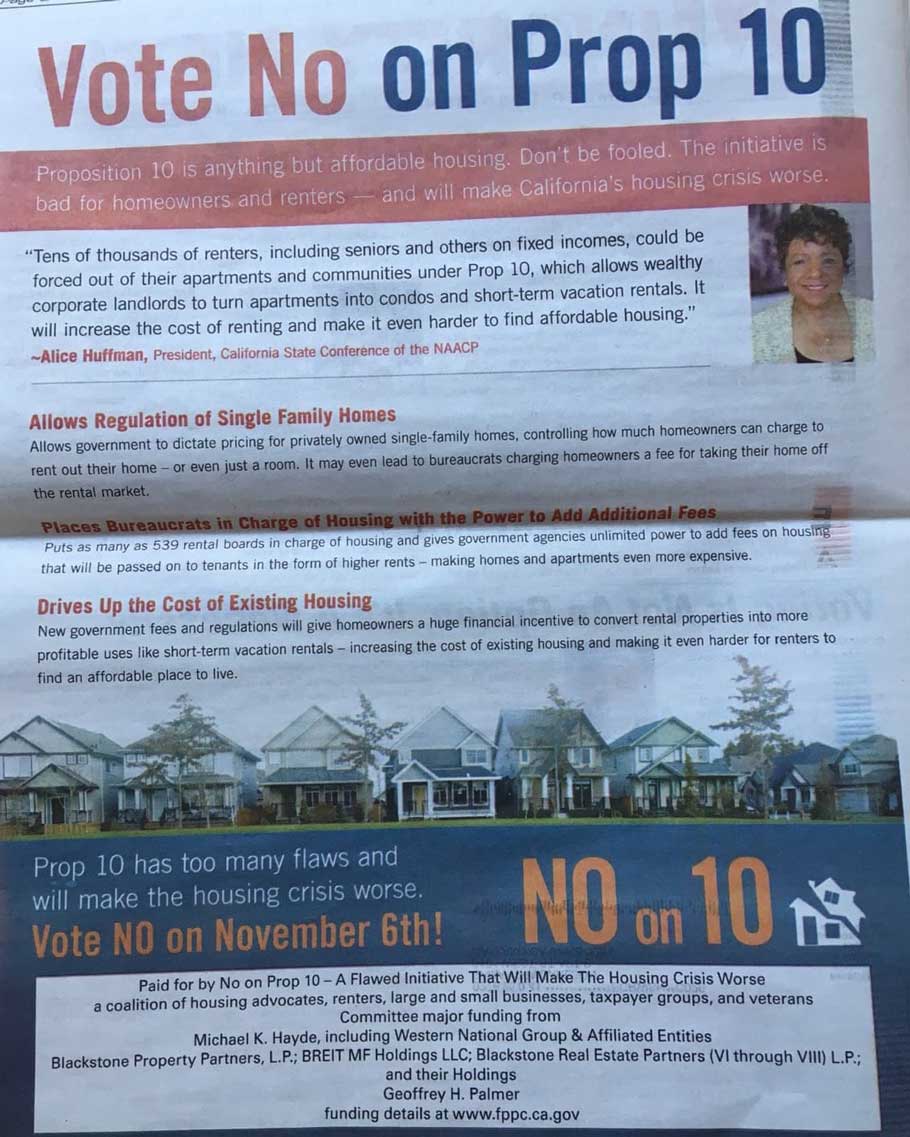 Alice Huffman’s outlines her opposition to Prop 10. Photograph: Sam Levin for the Guardian

She said two campaigns opposing Prop 10 had contacted her asking to help with consulting, adding that she chose the group that would pay her more: “I took the highest bid.”

Huffman said the NAACP’s opposition was not influenced by her consulting contract.

The NAACP was sending mailers to hundreds of thousands of voters, she said. A recent flyer was presented like a newspaper, titled Minority News and backed by the so-called Committee to Protect the Political Rights of Minorities. That committee is registered to Huffman, and the printout included a large spread against the measure, saying “Proposition 10 is anything but affordable housing”. It provided a lengthy quote from Huffman, citing her as the NAACP state president.

The pamphlet also offered a long list of “statewide organizations” that oppose Prop 10, which included the Service Employees International Union (SEIU) 2015. But SEIU 2015, which represents hundreds of thousands of caregivers, is an official supporter of Prop 10, not an opponent, according to a union spokeswoman who first learned of the inaccurate flyer when the Guardian contacted her.

The NAACP pamphlet further mentions “SEIU 1100” as a Prop 10 opponent, which appears to be a non-existent SEIU affiliate.

Huffman said there was a misunderstanding after an individual SEIU 2015 member endorsed the measure and implied it was on behalf of the group, adding: “That was unfortunate … I’m sorry it happened.” She did not have an immediate comment about “SEIU 1100”. 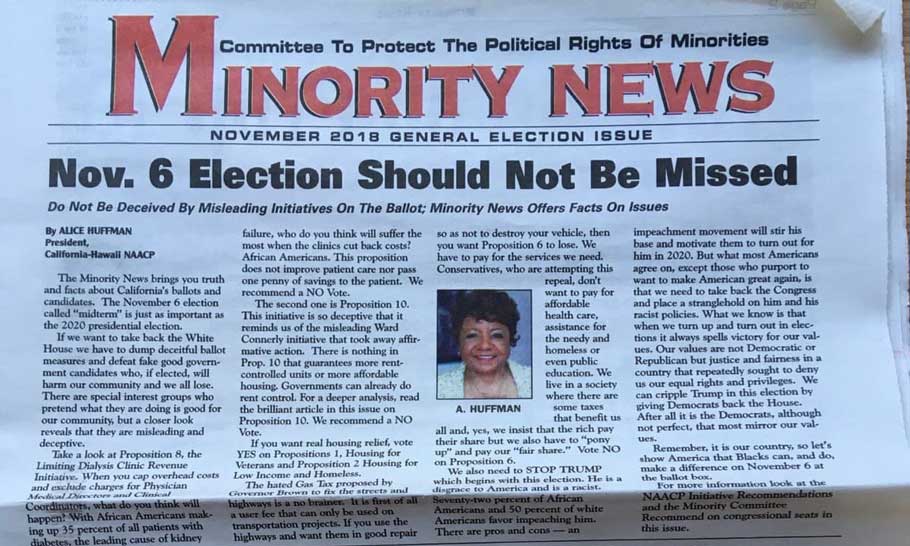 Another clipping from the mailer sent to voters in the upcoming midterm election. Photograph: Sam Levin for the Guardian

Activists across the state, including NAACP members, said they were stunned by Huffman’s mailers.

“WEB Du Bois must be rolling in his grave,” said Leticia Arce, a lead organizer with not-for-profit Causa Justa, referencing the co-founder of the NAACP. “I would have expected they would have stood on the right side of history and stood on the side of working-class people and working-class black folks fighting to stay in their home.”

Carroll Fife, an elected member of the Oakland NAACP executive committee, said her chapter was the largest in the state and had no involvement in determining an official stance on Prop 10.

“It was a total surprise to our entire chapter,” said Fife, who is also a director with Alliance of Californians for Community Empowerment (ACCE), a group supporting Prop 10. “When people are willing to … get paid in order to take positions, it really does the community at large a disservice.”

Prop 10 would eliminate a law called Costa Hawkins, which was passed two decades ago when real estate and landlord groups pushed for rent control restrictions. The law banned cities from implementing rent control for any housing built after 1995, with stricter rules for some cities. For example, San Francisco, considered the most expensive housing market in the country, cannot control rents on apartments built after 1979 under the law.

Prop 10 would allow cities to make their own policies, enabling some major metro areas in crisis to put in place rules to protect the most vulnerable renters, according to supporters. 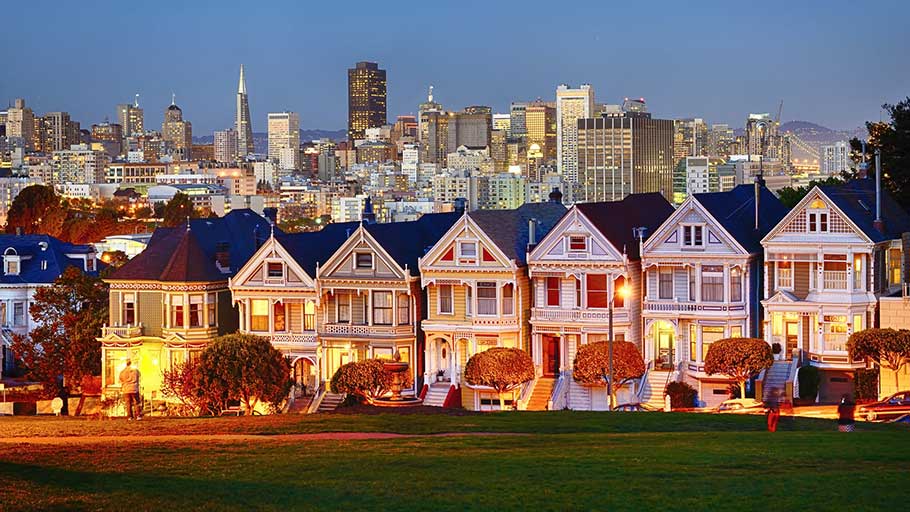 Critics of Prop 10, including Huffman, have argued that new rent control policies would negatively affect homeowners and could further drive up the cost of housing through price controls. Some researchers, however, have argued that expanded rent control can provide immediate protections without stopping new construction.

Christina Livingston, the ACCE state director and one of the co-authors of the measure, said the initiative would help stem the tide of displacement, noting that the homelessness and eviction crises have disproportionately affected African Americans. She knows firsthand: her family has been repeatedly priced out of homes in the Bay Area in recent years, ultimately pushing her out to the state capital of Sacramento.

“I’m not a low-income person. I run an organization,” she said, adding that the high-stakes crisis made the NAACP’s efforts all the more hurtful. “It made me very confused and sad to see that an organization with such a rich legacy would take that position … against a proposition that is so clearly designed for black people, by black people.”

Experts said it did not appear that Huffman was violating any election laws.

“To have the president of your organization also be on the payroll of the campaign you’re endorsing … it’s a moral and ethical question,” said Zev Yaroslavsky, the director of the Los Angeles Initiative at the UCLA Luskin School of Public Affairs. “They have to decide whether their integrity has been compromised.”

A spokesman for the national NAACP said its state branches are autonomous and declined to comment further.