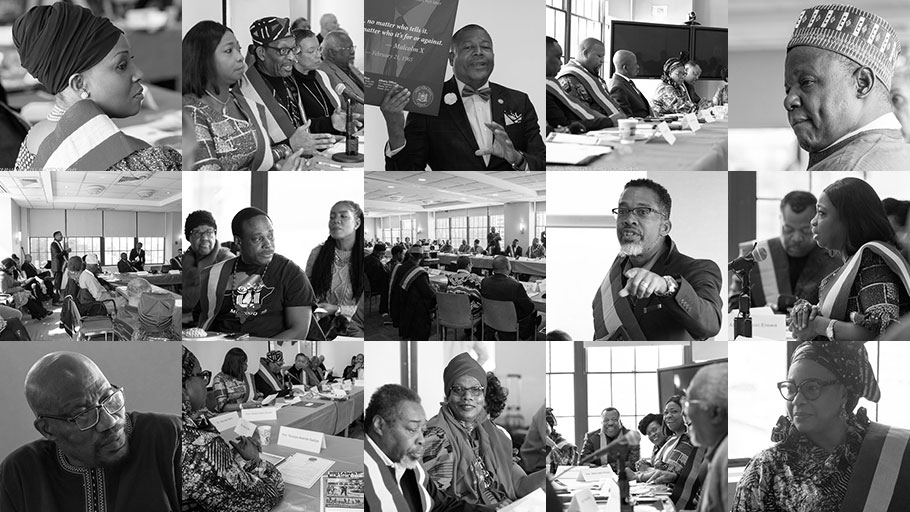 New York, NY — There is no way to describe the February 22nd Malcolm X Commemorative Session of the Pan African Unity Dialogue but AWESOME! We had a full house with more than 75 PAUD Participants and Special Guests in attendance. Given the current state of affairs with IBW, including intensive plans for the March 7th Rally, the Summation will synopsize some of the major highlights of this extraordinary Session: 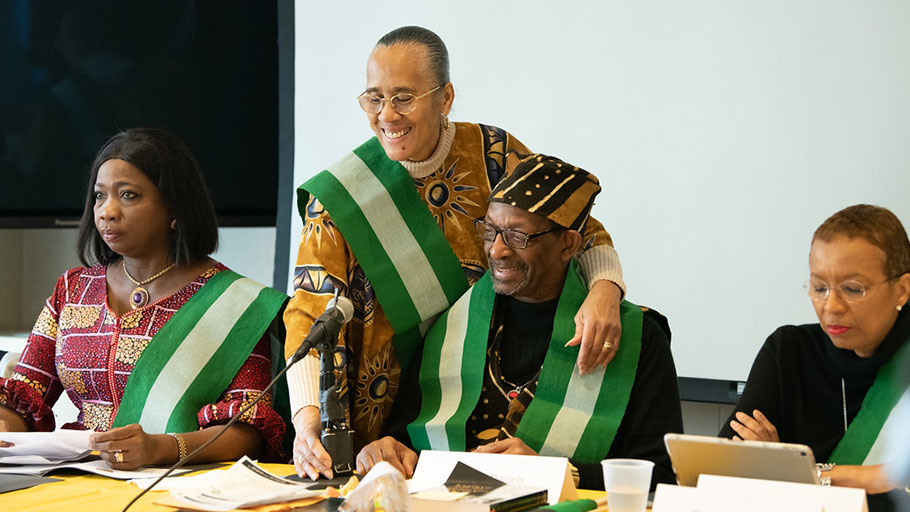 After Invocation by Mary France Daniels and Welcome by Estela Vazquez, New York State Senator James Sanders delivered a strong tribute to Malcolm X. He concluded by announcing the introduction of legislation to fund re-opening “cold cases” like the assassination of Malcolm. He urged the Participants to view the Neflix Documentary: Who Killed Malcolm X. Later in the meeting, Imam Talib Abdur-Rashid shared that February 21st, the evening before PAUD, there was a standing room only, overflow audience at the Malcolm X/Dr. Betty Shabazz Center in Washington, Heights. 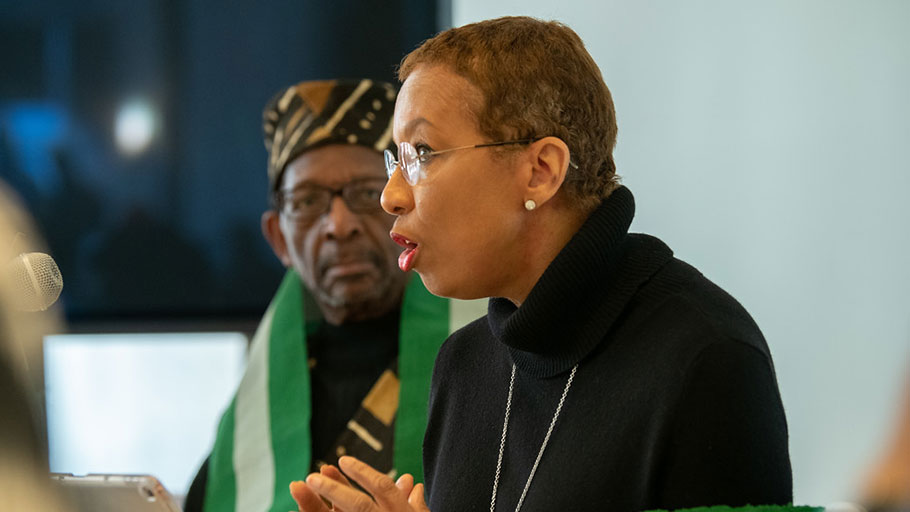 H.E. Rhonda King, Permanent Representative to the U.N. from St. Vincent and the Grenadines, who PAUD has adopted as our Ambassador, provided background on the selection of SVG to a seat on the Security Council. She outlined the progressive posture SVG intends to take, under the leadership of P.M. Dr. Ralph Gonsalves, in terms of building bonds of solidarity between the Caribbean, Brazil, Africa and the U.S. Diaspora as part of the Sixth Region of the African Union. SVG has already resurrected the issue of reparations for Haiti as a reminder that the chronic instability in Haiti is in part due to longstanding unresolved social and economic underdevelopment caused by the centuries of exploitation of the First Black Republic and being compelled to pay reparations to France. Ambassador King’s passionate presentation was well received. 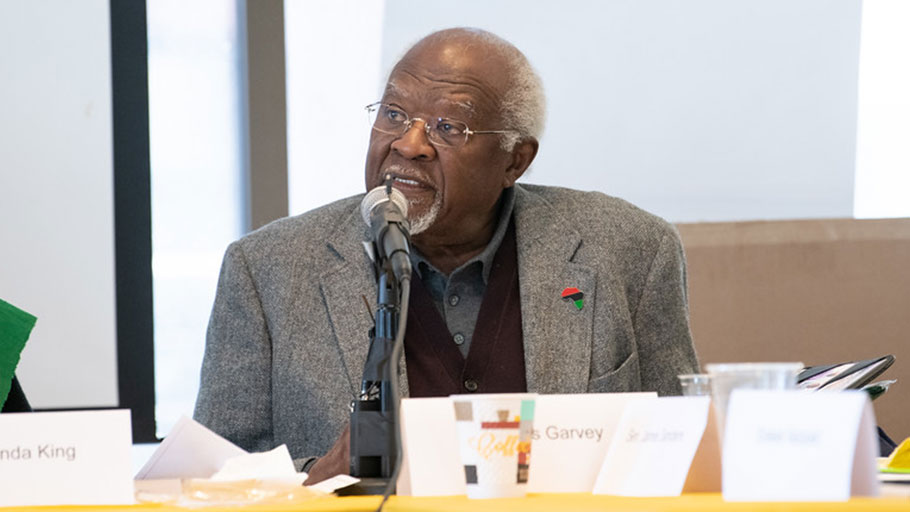 Dr. Julius Garvey delivered a moving presentation on the background for Marcus Mosiah Garvey’s convening of the International Convention of the Negro People’s of the World in 1920 – which drew more than 2,000 delegates from Africa, the Caribbean, Central and South America, Great Britain, France and the U.S. The Convention began with a rousing Rally at Madison Square Garden which attracted upwards of 25,000 and concluded after 30 days of deliberations with the adoption of The Declaration of the Rights of the Negro People of the World, an Anthem and Flag (the Red, Black and Green) which provided the framework for the Universal Negro Improvement Association and African Communities League (UNIA-ACL) as a virtual Nation of Black people globally. Dr. Garvey repeatedly quoted his father as he detailed the vision of what became the largest mass-based, Black self-reliant organization in history! Dr. Garvey’s informative and inspirational presentation was received with thunderous applause! The Convener noted that working with Dr. Garvey, IBW has declared 2020 the Year of the Honorable Marcus Mosiah Garvey and will launch an educational campaign leading into State of the Black World Conference V in Newark, NJ, tentatively scheduled for December 2nd – 6th. 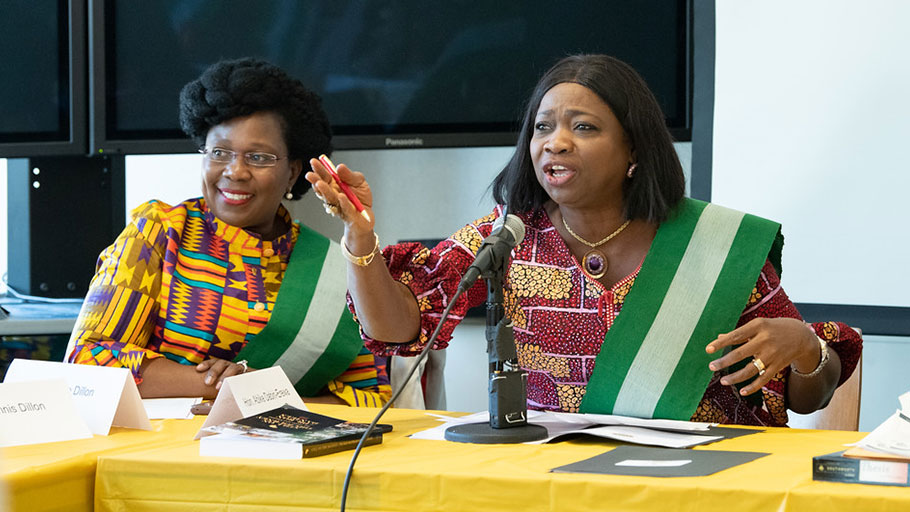 Special Guest, Honorable Abike Dabiri-Erewa, Chairman/CEO, Nigerians in Diaspora Commission, arrived with an impressive delegation of twenty-one dignitaries, including the Consul General, Chairperson of the Diaspora Commission, legislators from the Nigerian House of Representatives, a contingent from Maryland led by Rev. Dr. David Anderson and Ronke Macaulay, the brilliant Producer/ Director of the documentary film Badagry: the Joy of Return.The film traces the emotional and transformational journey of a multiracial group from the Diaspora, organized by Dr. Anderson, over the exact pathway that enslaved Africans took on the way to dungeons by the ocean before passing through doors of no return.

After an introduction by Dr. Zienzile Dillion, Madame Abike introduced the film as illustrative of the desire of the government and people of Nigeria to welcome African Americans home to the motherland. Her desire is that the sons and daughters of Africa from America take the journey across the pathway as a healing, reconciling experience and to travel back to the ocean with a new awareness of our heritage as descendants of Kings and Queens. After the film, Madame Abike informed the Participants that the next sojourn to Nigeria will be October of this year. The Convener advised Madame Abike that the strenuous work associated with organizing State of the Black World Conference V in Newark in December would prevent him from joining the journey in 2020. However, he expressed IBW’s eagerness to promote cultural-historical tourism to Nigeria and Africa and extended an invitation to Madame Abike to return with a delegation and exhibit to promote tourism to Nigeria at the State of the Black World Conference. Madame Abike subsequently was a guest on Dr. Ron Daniels Radio Show, Vantage Point, the Monday following the PAUD Session. 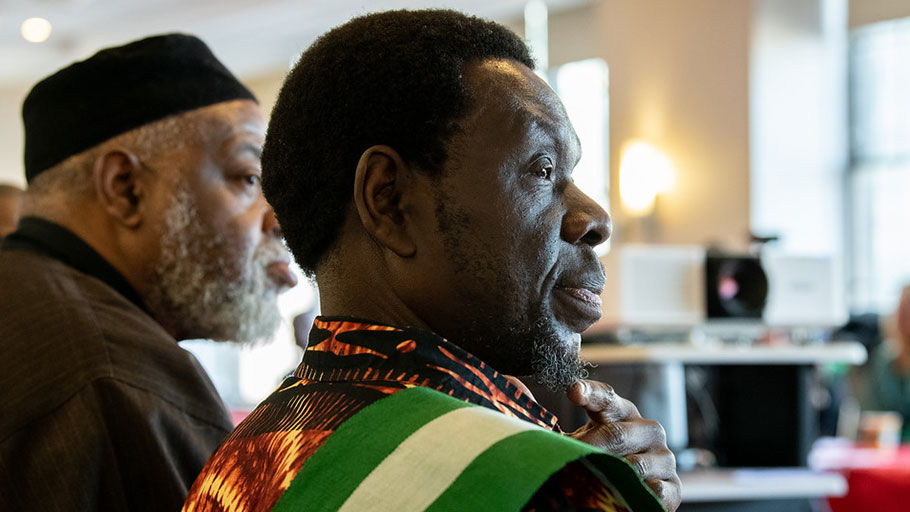 Milton Allimadi, Co-Chairman of the Crises in Africa Task Force, gave a poignant illustration of the power of PAUD via the Stop Museveni Campaign. Two relatively small demonstrations, one at the U.N. and another at the Uganda Mission, carried powerful condemnations of Museveni’s ruthless and murderous intervention and destabilization of the Congo and neighboring nation in East Africa. The content of both demonstrations was picked up by social media and had the effect of galvanizing the Ugandan Diaspora and allies to vocally speak out and protest against the Museveni regime. Opposition inside Uganda is on the rise after decades of authoritarian rule. Nations from Europe and even the U.S. that have previously been silent or complicit with Museveni’s brutal behavior have begun to suggest that change is necessary. Indeed, overtures have been made to Brother Allimadi to accept substantial resources to silence him. Of course, he has emphatically refused! 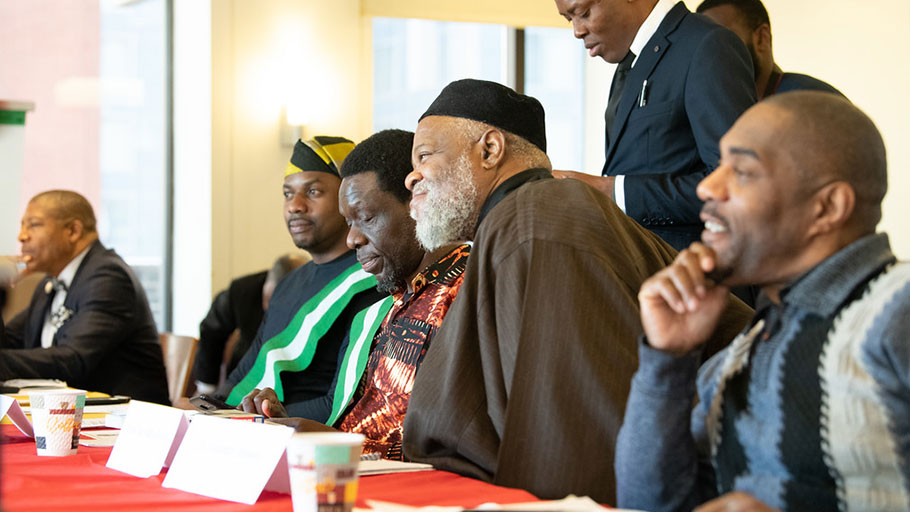 Imam Talib Adbur Rashid, Co-Chairman of the Crises in Africa Task, reported on the arrest and trial of former Sudanese autocrat Omar al Bashir by Sudanese Courts for crimes against the people of Sudan, particularly protesters and opposition leaders. The next move is for him to face trial before the International Criminal Court because of crimes against humanity associated with the interventions, death and destruction inflicted on Darfur and South Sudan. Imam Talib also reported on the ever-increasing lawlessness and human rights violations in Libya including the capture and trafficking of Black Africans in the wake of the ill-advised, U.S. instigated overthrow of Muammar Qaddafi. 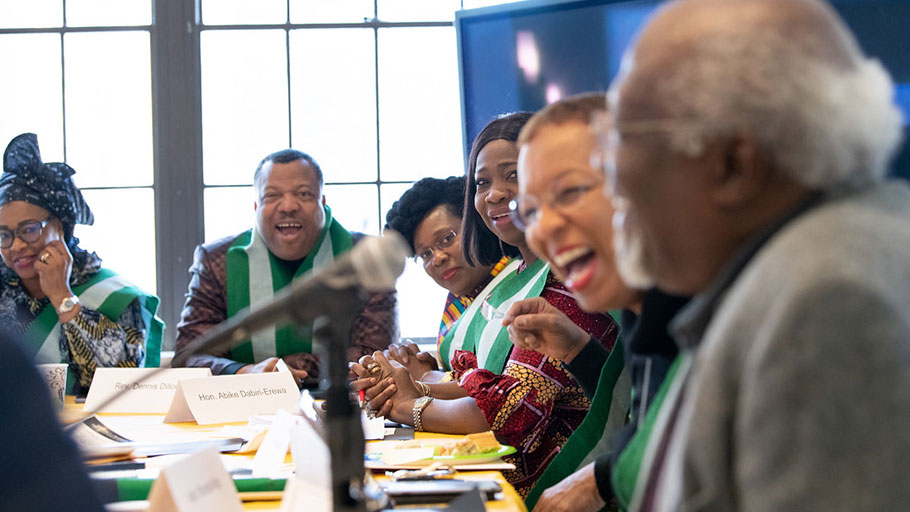 Rev. Dennis Dillon, visionary architect of the DOOR OF OUR RETURN (DOR) 2019 Sojourn to Africa made an abbreviated report with highlights of the Journey. He specifically cited meeting with President Addo of Ghana and arranging for the group to meet one of the daughters of Nelson Mandela as momentous occasions. Leaders from the delegation also addressed the Pan African Parliament – which agreed to establish a Diaspora Desk to facilitate ongoing interaction with African Americans. The most productive economic summit was also convened in South Africa. The next DOR will visit Nigeria, Zimbabwe and South Africa in November of this year. Rev. Dillon will present a fuller report at the May meeting of PAUD.

The Convener concluded the meeting by thanking the Special Guests for contributing to a truly informative and inspiring meeting of PAUD. In addition, he shared information about the forthcoming State of the Black World Conference V and appealed for support of the Participants in order to make the conference a major political and economic success.

After the benediction by Imam Talib Abdur-Rashid, the Session was adjourned with a robust recitation of Harambee – Let’s All Pull Together!