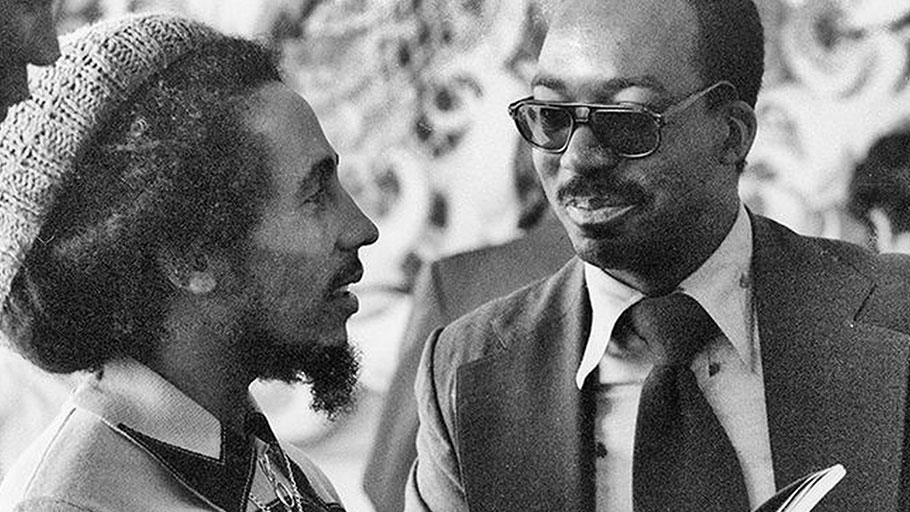 By Valerie Russ, The Philadelphia Inquirer —

It had no classrooms, no courses, no credits, and a faculty consisting of just one man of uncertain academic credentials who carried his books and papers in plastic grocery bags. But around the University of Pennsylvania campus, Spady School was said to change lives.

For 40 years, James G. Spady, best described as an independent scholar, set out a movable feast for hungry young intellects. At the Penn bookstore, in public libraries and diners, even the McDonald’s at 40th and Walnut Streets, students pressed close as he discoursed on history, music, art, economics, philosophy, and his foremost fascination, hip-hop culture.

Spady seemed to know not only everything but everybody. He had talked with, and often befriended, a galaxy of African American greats, ranging from writer James Baldwin to poets Sonia Sanchez and Gwendolyn Brooks, to singer Nina Simone and the Funkadelic George Clinton, to reggae pioneer Bob Marley and rapper Tupac Shakur. In his plastic bags were the tapes to prove it, along with his cache of books — he had written or edited 15 — and countless articles, essays, and pamphlets.

“He was his own institution,” said H. Samy Alim, a professor of linguistic anthropology at UCLA. “He never looked for validation from anyone. He was, as he liked to say, a free black man.”

Alim had entered Penn in the mid-’90s thinking he would become a doctor. Spady School led to a course correction. “It was revolutionary what he did for so many of us,” he said. “It changed my life’s trajectory completely.”

When Spady died at age 75 on Feb. 17 of complications from diabetes, word spread to admirers and proteges around the world. Many arrived in West Philadelphia 10 days later from London and Berlin, Africa, and the Caribbean to say goodbye to “a brilliant mind.” Poet Sanchez was among the speakers at Francis Funeral Home.

“His words were uncut diamonds,” she told The Inquirer last week.

Sanchez came to the city in 1976 to teach English at Temple University, and Spady was “the first person who welcomed me and my children,” she said. “There was a knock on the door, and I think he had a rose. I remember one flower. He said, ‘Welcome to Philadelphia. It is good that you’ve moved here.’”

She recognized him as a friend of Black Arts Movement writer Larry Neal and a perennial presence at literary events here and in New York. He hadn’t come to her home alone, she recalled, but had brought a budding playwright whose work he wanted Sanchez to read.

“He was constantly a promoter of young people,” she said. “He was the quintessential professor, teacher, and public scholar.” 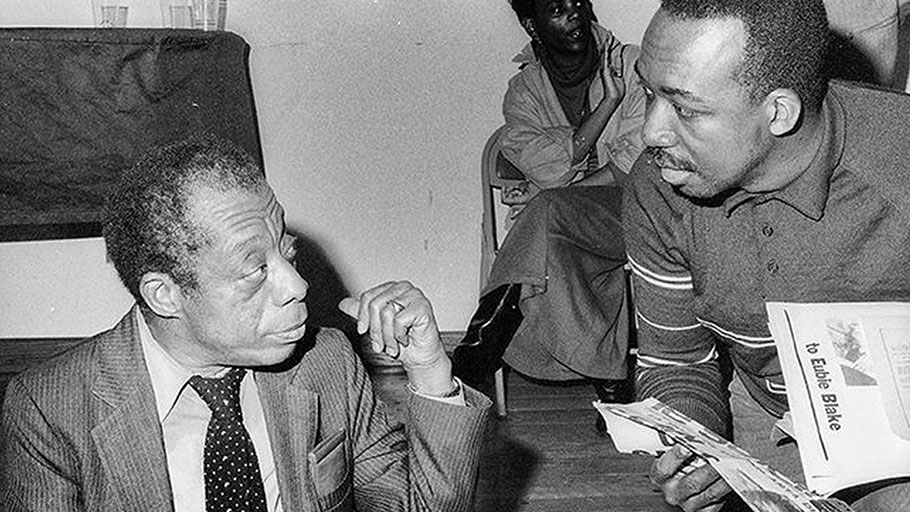 The novelist and essayist James Baldwin (seated) talks to James G. Spady at the African American Museum in Philadelphia in March 1986. Photo by Leandre Jackson.

Even to those in his near orbit, the private James Spady was a puzzle missing most of its pieces.

If offered a ride home, he wouldn’t divulge where “home” was; he would only be dropped off in the vicinity. And when he died at the Penn Rehabilitation and Care Center, few knew what culprit had ended his life — same as few knew how or where that life began. As best anyone could tell, he was a bachelor wedded to writing, researching, interviewing, thinking expansive thoughts, and holding forth for the next generations.

Larry Allen, his younger brother by 10 years, could fill in only some of the blanks.

Spady was born in 1944 in the small Virginia town of Capeville, the son of a construction worker and a farm worker. Capeville was a place kids yearned to flee, and when as he graduated high school in 1962, he did, and headed for Philadelphia to live with relatives and attend college.

Allen remembered him returning a couple of years later with a gift, a new book titled Great Negroes, Past and Present. “That book was very significant to me,” said Allen, now 65. “I kept it all these years.”

Spady enrolled at Penn. An acquaintance said he majored in economics; others said he took classes at Cornell, as well. He never talked about degrees, in which he put little stock, and there’s no indication he held any.

Yet, this much was sure: He had “a deep love for black people, for the entire global African Diaspora,” Alim said, and it propelled him into activism from the moment he arrived here.

He got involved with the Marcus Garvey Foundation, which carried on the educational mission of the revered founder of the Universal Negro Improvement Association. In 1965, as part of the NAACP Youth Council, he joined civil rights leader Cecil B. Moore in picketing Girard College to end its white-males-only admission mandate. Two years later, on April 22, 1967, Spady — exuding Black Panther-style cool in a black jacket, white sweater, and shades — stood with Muhammad Ali at Howard University’s Frederick Douglass Memorial Hall in Washington, D.C., as the boxer gave his “Black is Best” speech, days before refusing military service. 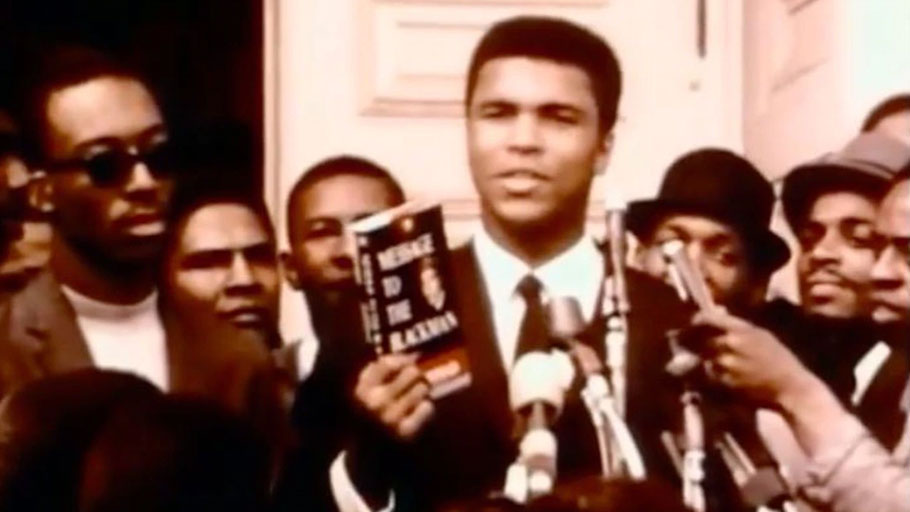 James G. Spady (left) stands beside Muhammad Ali on the steps of Howard University’s Frederick Douglass Memorial Hall on April 22, 1967, as the boxer delivered his “Black is Best” speech, days before refusing military service. Screenshot from Eyes on the Prize documentary.

Spady became a prolific writer and interviewer of the big brains in black culture’s vast global sweep. He wrote for the Philadelphia Observer and city weekly Scoop USA, but also for scholarly journals, in which he shared tables of contents with the likes of African American historian John Henrik Clarke and Cheikh Anta Diop, the Senegalese historian and anthropologist. Spady, fluent in French, was instrumental in having Diop’s books, among them The African Origin of Civilization, translated into English. 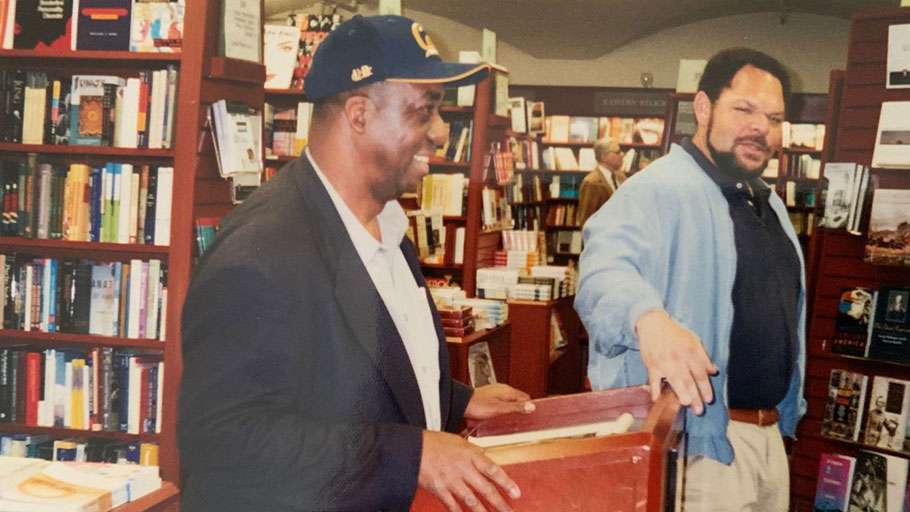 James G. Spady, (in baseball hat) speaks to students at Stanford University bookstore in May 2000. Spady and H. Samy Alim (not shown) had published their first book together, “Street Conscious Rap,” in 1999.

Four decades ago, George D. Yancy, now 58 and a professor of philosophy at Emory University, was a Simon Gratz High School senior competing in an oratorical contest at Mother Bethel AME Church when he met Spady, one of the judges. After the other adults praised the students’ skills, Spady asked, “Why didn’t you guys memorize your speeches?”

In that moment, Yancy understood the meaning of intellectual rigor.

He was learning about philosophy, but did not see himself pursuing it because he knew of no black philosophers. Spady told him about Leonard Harris, Lucius Outlaw, and Joyce Mitchell Cook, the first black woman to earn a doctorate in philosophy from Yale.

He was “an agent of change,” Yancy said. “He taught us that we didn’t have to settle for what the world said we were equipped for — for mediocrity.”

Yancy earned a bachelor’s degree from the University of Pittsburgh and a doctorate in philosophy from Duquesne University. At home in Philly during breaks, he went to Spady School.

Over the years, ever-changing flocks of students — 10 or so at a time — followed their mentor to public spaces off the beaten path of academe, the air often redolent with fries and burgers. Spady called them “rich ethnographic sites for training as keen observers of black life,” recalled Samir Meghelli, a 2004 Penn grad and now senior curator at the Smithsonian Institution’s Anacostia Community Museum in Washington, D.C.

“He was committed to this idea of democratization of knowledge,” Meghelli said, “and making it accessible to as many people as possible, not confining oneself to just teaching a course at a university.”

The night sessions lasted hours, with Spady digging deep into his plastic bags.

“Somehow, he knew exactly what was where,” Alim said. “If we were discussing Tupac, he would reach his right hand out, grab this article, or this tape, or this book, and it would all be on theme, because he had talked to Tupac.”

Spady was in the vanguard of hip-hop scholars, and lectured widely. He saw it as a natural extension of a black cultural thread rooted in West Africa that stretched to Garveyism, a Pan-African philosophy of group pride and independence, through the Harlem Renaissance, jazz, and reggae, to the “rapping” of R&B radio DJs like Philly’s Georgie Woods, to the Black Arts Movement of the 1960s and ’70s.

“He viewed hip-hop creators as cultural theorists,” Alim said. “He didn’t look at them as artists making music. They were the ones theorizing what was important to the culture from within it.”

For many devotees, an enduring memory is of James Spady in the Penn library, hunkered over stacks of research materials. His life was his lesson to them: No matter what was going on, no matter if they thought racism was holding them back, or professors had it in for them — “sit down and do the work,” he’d say.

As Spady’s health deteriorated in the last three years, he was visited at the Penn care center by Karen Asper Jordan, a retired nurse who, as a teenager, protested with Spady at Girard College. He asked that she tell no one where he was.

On her last visit, she found his room empty. Her search led to the solarium, where he sat surrounded by papers, as always, working.

This article was originally published by The Philadelphia Inquirer.