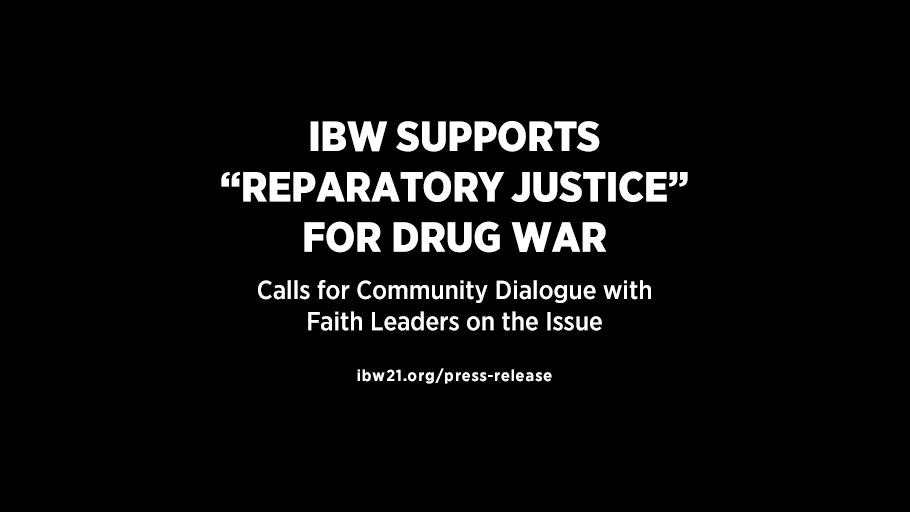 Calls for Community Dialogue with Faith Leaders on the Issue

New York, May 21 — The Institute of the Black World 21st Century (IBW) announced today that the organization supports initiatives in New York and around the country that seek to repair the devastating damages done to Black communities by the War on Drugs and racially biased criminal justice policies.

As the struggle for drug and criminal justice policy reform intensifies in New York City and NY State among policy advocates and politicians, IBW feels it is essential to make it clear that the organization firmly supports progressive measures that will reduce harm and heal Black families and communities.

“This is particularly important in light of the recent reaction of some African American faith leaders to Working Families Party candidate for Governor Cynthia Nixon who suggested that legalization and regulation of marijuana could be a ‘form of reparations’ for the damages of the War on Drugs in Black and Brown communities,” said Dr. Ron Daniels, President of IBW. “While IBW is not endorsing Cynthia Nixon’s campaign for the Governor, she is absolutely on target with her analysis and recommendations on this vital issue.”

IBW supports the legalization and regulation of marijuana as a means of ending the disproportionate arrests and incarceration of Black and Brown people in New York and the widespread damages inflicted on these communities. Accordingly, IBW is partnering with the Drug Policy Alliance (DPA) and other organizations in the ‘Start Smart NY’ Initiative.

“The ravishes of this racially biased War on Drugs must be repaired and the affected communities must be made whole through a variety of social and racial justice measures,” Dr. Daniels, continued. “The discriminatory targeting, arrest and incarceration of Black people has had devastating effects on Black families and communities across the country — severely limiting opportunities for those caught up in a war on drugs that is actually a war on Black people.”

Over the past two years, IBW has successfully worked on the issue of legalization and regulation of marijuana, collaborating with faith leaders on the passage of Initiative 71 in Washington, D.C. and Proposition 64 in California.

Dr. Daniels added that there is an urgent need for a community dialogue with faith leaders, civil rights/human rights leaders, elected officials and drug policy reform advocates on the implications marijuana legalization in the Black community. He stated that IBW is eager to engage with the faith leaders who took issue with Cynthia Nixon’s comments on reparations for the Drug War.

“You do not have to support the use of marijuana to support legalization and regulation as means of ending the disproportionate arrest and incarceration of Black people and the damages inflicted on our communities,” he stated. “Equally important, a multi-billionaire dollar industry must not be created in this state without provisions that massive resources be allocated to revitalize Black and Brown communities ravished by the Drug War. While this is not the traditional definition of reparations, it can serve as a kind of reparatory justice.”

Dr. Daniels also expressed his excitement about engaging the coalition of faith leaders who reacted to Cynthia Nixon. “As one of the leading organizations spearheading the reparations movement in the U.S. and globally, IBW is always eager to learn of new voices that are ready to visibly embrace and organize/mobilize to achieve reparations for African Americans. We really look forward to discussions with Rev Dr. Johnnie Green, Dr. Carl Washington Jr., and Rev. Troy De Cohen and other faith leaders in this regard.”

IBW plans to reach out to faith leaders in the near future in hopes of stimulating an urgent community dialogue on these issues.