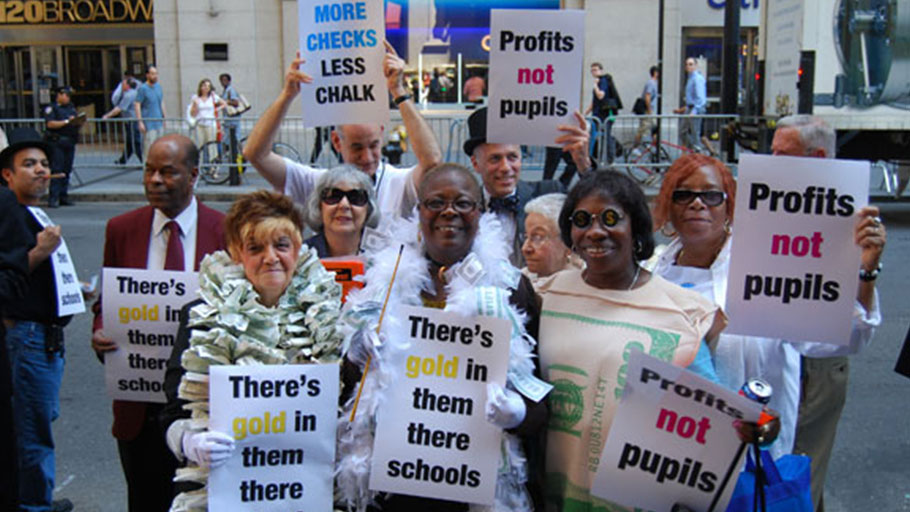 But opposition decreases toward school vouchers

President Donald Trump’s vocal support for charter schools and private-school vouchers has had some school choice supporters wringing their hands over whether it will have a negative impact on the policies they champion. This is particularly true for charter school backers who, over time, have built up bipartisan support.

Now a new public opinion poll from Education Next, a journal published by Stanford University’s Hoover Institution, is providing insights into whether the president—as well as the broader political dynamics in play—have swayed the public’s views on school choice.

Support for charter schools has fallen 12 percent from last year, the largest change in opinion that EdNext saw on any single policy from last year. The steepest drop-off came from white participants. At the same time, the survey found that opposition toward school vouchers and other similar policies that direct public aid toward private schools has softened.

Is There a ‘Trump Effect’ on School Choice?

A new poll on K-12 captured public opinion on charter schools, as well as private-school choice.

Charter schools are publicly funded schools that are run by organizations independent of traditional school districts. EdNext told survey participants that President Donald Trump has expressed support for charter schools before asking respondents for their own views. 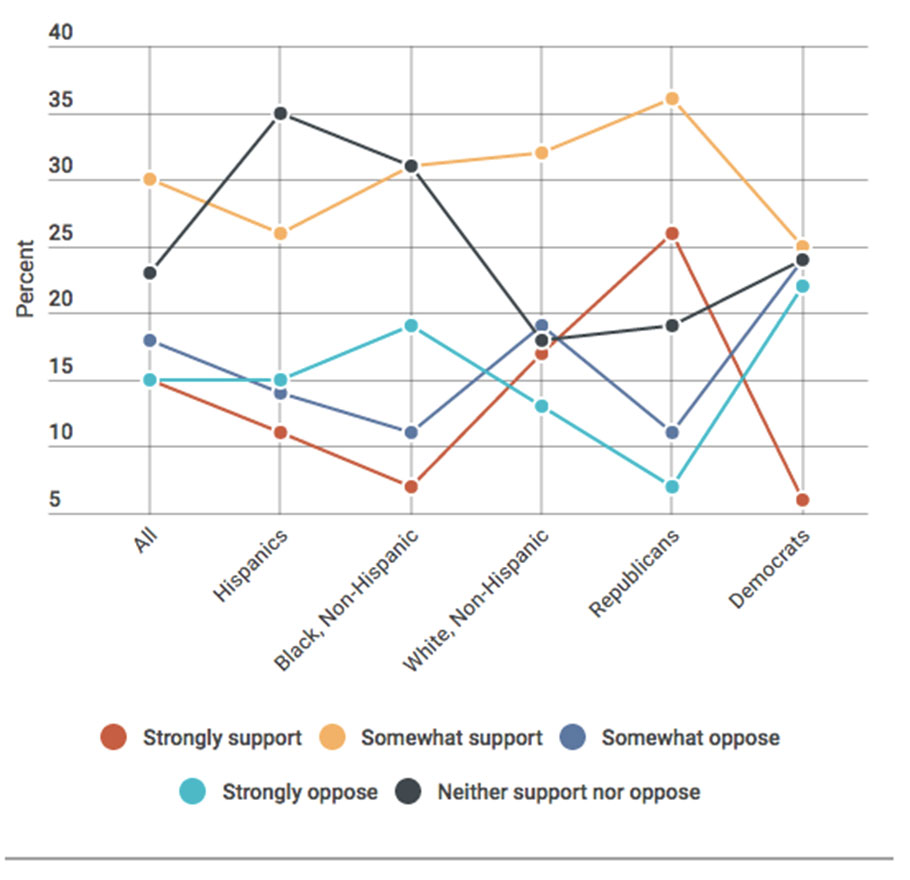 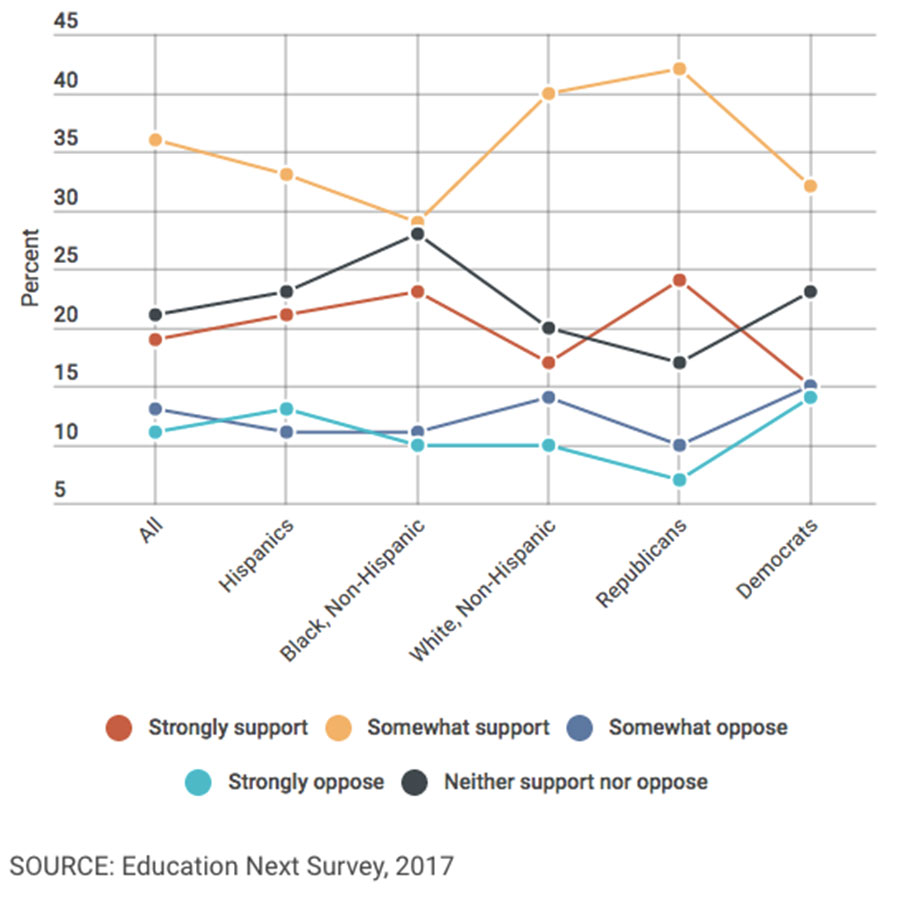 But the researchers who conducted the poll don’t think the big dip in support for charters is linked to Trump’s enthusiasm for them.

“If the decline in support were related to Trump’s support of the concept, I would have expected it to occur primarily among Democrats, and that’s not what we see,” said Martin West, a professor at the Harvard Graduate School of Education and one of the authors of the report that accompanies the poll. “I would also expect there to be similar changes in opinion about other policies that the president has embraced especially other school choice policies, which is not what we see.”

Support for Charter Schools Is Eroding 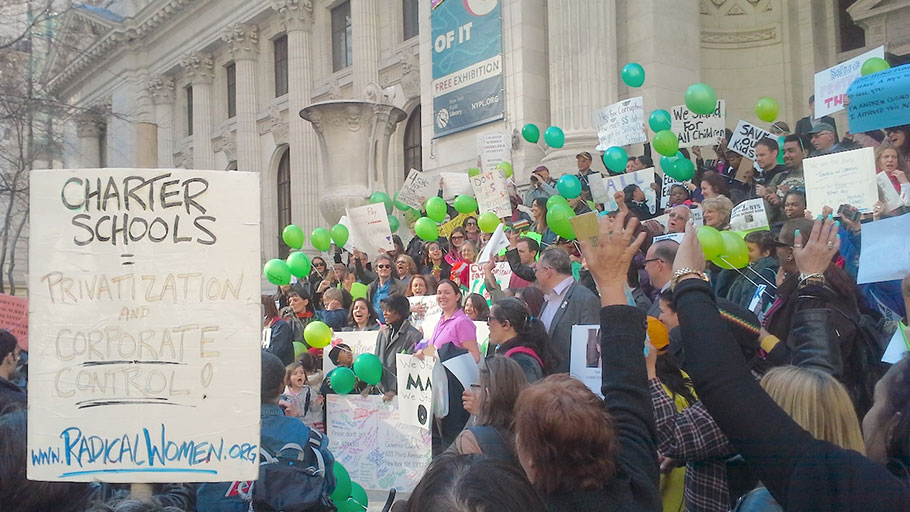 The report posits several reasons why support for charter schools has plummeted.

President Barack Obama, one of the most high-profile champions of charters, is out of office, and, write the report’s authors, some of the most prominent liberal voices on the national stage—Sen. Elizabeth Warren, D-Mass., and Sen. Bernie Sanders, the Vermont Independent, have voiced opposition to charters. (While Warren opposed an effort to expand charter schools in Massachusetts and has expressed strong concern over for-profit charter schools, she has also said that charters producing extraordinary results should be “celebrated.” Sanders came out against “privately-controlled” charters during the 2016 campaign for the Democratic presidential nomination and also opposed the expansion initiative in Massachusetts.)

National civil rights leaders—including the NAACP and the Movement for Black Lives—also have taken a harsh stance toward charters recently, with the NAACP calling for a ban on any new charters opening.

Finally, expensive and high-profile political battles over charter schools, such as the failed effort last fall to raise the cap on the number of schools allowed to open in Massachusetts, may also contribute to the eroding of support beyond the Democratic party, said West.

But those numbers change based on how the question was asked. Respondents were divided into two groups. One was informed that Trump favors charter schools. Within that group, support among Republicans significantly increased, and only slightly eroded among Democratic respondents. This has the net effect of boosting support for charter schools to 45 percent.

What may be most worrisome to charter school supporters is the drop in support among blacks and Hispanics. Support among African-American respondents fell from 46 percent to 37 percent, and from 44 percent to 39 percent among Hispanics. A visible segment of the charter sector devotes itself to serving low-income black and Latino students. 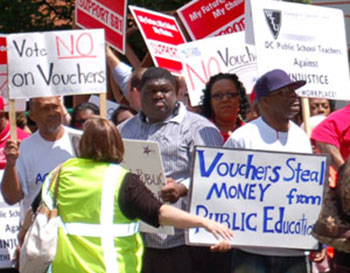 Opposition to tax-credit scholarships for low-income students has fallen from 29 percent last year to 24 percent this year. Support for the policy—which is most popular among the various types of private-school choice programs according to the poll—remained essentially flat at 54 percent.

The same trend was seen on the question of allowing all families to use vouchers: Opposition fell while support went unchanged.

But how the question is phrased affects the answer. When pollsters asked survey participants whether they supported “government funds” being used for private school tuition—versus giving families “wider choice”—vouchers received less support.

Although Trump’s backing of a particular policy would generally increase support among Republicans while raising opposition among Democrats, the net effect often remained the same, causing no meaningful change in the overall popularity of a policy.

EdNext asked participants this same question in 2009, during President Barack Obama’s first year in office, and found that the president’s position on a policy shifted public opinion toward his stance—regardless of party affiliation.
This was a boon for charter schools at the time, which saw an 11 percent bump in support, but less so for school vouchers which saw an 11 percent drop.

EdNext polled respondents between May 5 and June 7 on a number of other education topics such as testing, merit pay for teachers, and the Common Core State Standards.

Support for the standards had been in a downward spiral since 2013. And they’ve been a favorite punching bag among some members of the GOP, including Trump, who decried the standards as a “total disaster” during the election.

But the downward trend has “suddenly come to a halt,” according to the poll. Forty-one percent of respondents support the standards, while 38 percent oppose—levels that are virtually unchanged from last year. While Republicans tend to oppose the standards and Democrats generally support them, teachers are evenly divided on the policy.

But as the researchers point out in their report, those numbers only capture opposition to the name “common core.” When using a simple description of the common core instead of its name, support for the standards is significantly higher at 61 percent.

Testing and holding schools accountable for student performance continues to have broad support across members of both parties. About two-thirds of respondents agree with the federal requirements to test students in math and reading every year from the latter elementary grades through middle school and once in high school.

In general, public opinion has shifted in the last year toward a preference for a smaller role for the federal government in education policy.

On the topic of union dues, an issue that the U.S. Supreme Court could soon address, 44 percent of survey participants said they were against requiring teachers to pay fees to unions even if they are not members. But more surprisingly, the report’s authors said, teachers are slightly more likely to oppose union dues than support them by 47 to 44 percent.