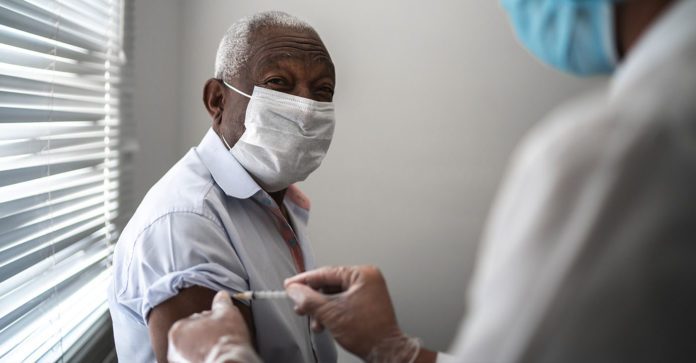 Push is On to Increase African American Confidence in COVID Vaccine

You Are Here: Home » Blog » News & Current Affairs » Push is On to Increase African American Confidence in COVID Vaccine

Former President Barack Obama has vowed to take the new COVID-19 vaccination on live television. Dr. Ebony Hilton, a physician in the critical care and anesthesiology department at the University of Virginia Health, is also publicly taking the vaccine and documenting how she’s coping on YouTube.

What Obama, Dr. Hilton, and Lindsay all have in common is that they are African American.

Intentional or not, the rollout has featured prominent Black people.

The mistrust in medicine and science in the Black community remains palpable for lots of well-founded reasons.

“Truth and transparency are going to start with me,” Dr. Hilton declared. “I want you to see me in real-time as I undergo this process, and as my body adapts as I have this medicine in my body.”

Baker praised Meharry Medical College President Dr. James Hildreth, one of the world’s leading immunologists and an African American who sat on the U.S. Food and Drug Administration’s panel that approved the rollout of Pfizer’s coronavirus vaccine.

“There was an African American doctor that was in charge of the vaccine,” Baker said during a video call.

“I felt more comfortable that he and other African Americans were on the boards to come up with the vaccine. And he guaranteed that it wouldn’t be another Tuskegee kind of experiment. And he urged Black Americans to use the vaccine.”

Because of the Tuskegee experiment, the notorious 40-year study that began in 1932, where U.S. Public Health officials misled African Americans about their health status.

The study’s participants were infected with syphilis, and health officials withheld treatment like penicillin, leaving some to die.

“The Tuskegee Experiment ended ten years before I was born, and we still have heavy metal laced water in Flint, Michigan, we still have not fixed,” Dr. Hilton offered.

However, she offered optimism about the new coronavirus vaccine.

“So, join me, and I’ll be as open and honest as possible. We have one time to do this right, and I’m hoping it’s this time.”

Dr. Anthony Fauci, the nation’s foremost infectious disease physician, also championed the work of Dr. Kizzmekia Corbett, an African American scientist, whom Dr. Fauci said was at the forefront of the development of the vaccine.

“So, the first thing you might want to say to my African American brothers and sisters is that the vaccine that you’re going to be taking was developed by an African American woman. And that is just a fact,” Dr. Fauci remarked.

More than 300,000 Americans have died, and nearly 17 million have contracted the coronavirus. Some reports indicate that as many as 25 percent of COVID-19 victims are African American.

However, that hasn’t stopped the skepticism about the vaccine among many Black people.

“We saw early on that vaccine acceptance and willingness to enroll in vaccine clinical trials were going to be a major challenge,” Dr. Reed Tuckson, a former public health commissioner in Washington, D.C., and the leader of the Black Coalition Against COVID-19, a D.C.-based effort to spread information about the virus and potential vaccines to Black Americans, told NBC News.

Over the past several months, the coalition has worked with several Washington community organizations, historically Black colleges and universities, and community leaders, to share information about Covid-19 prevention.

They also drafted a public “Love Letter to Black America” that calls for people to be open to vaccines when they are available.

“The African American community needs to understand that 2020 is not 1930 or 1940,” Tuckson said. “There were no African American physicians or scientists or health policy leaders in the past. Today is a different situation.”